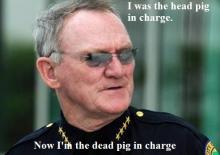 On August 16th former Miami Chief of Police John Timoney passed away after a brief bout with lung cancer. Prior to serving as Chief of the Miami Police Department he served as Superintendent of Police in Philadelphia. His obituaries in the Miami Herald and other news outlets, despite being laden with praise from his friends and former colleagues, failed to give his record of brutality and repression the spotlight it truly deserves in these trying times. It is rare when the liberal media gives American heroes the respect they have earned from a life time of service.