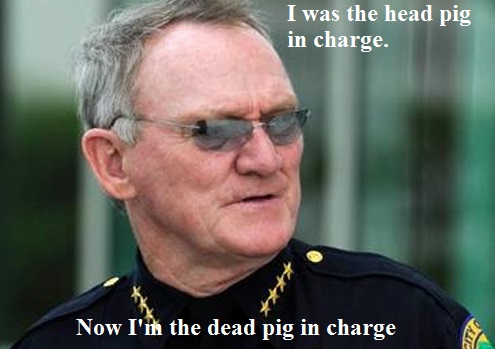 On August 16th former Miami Chief of Police John Timoney passed away after a brief bout with lung cancer. Prior to serving as Chief of the Miami Police Department he served as Superintendent of Police in Philadelphia. His obituaries in the Miami Herald and other news outlets, despite being laden with praise from his friends and former colleagues, failed to give his record of brutality and repression the spotlight it truly deserves in these trying times. It is rare when the liberal media gives American heroes the respect they have earned from a life time of service.

After immigrating from Ireland in 1961 Timoney rose through the ranks of the NYPD under the tutelage of another legendary law enforcement figure two time Commissioner Bill Bratton. Timoney served as Bratton's right hand man with the rank of First Deputy Commissioner during the latter's implementation of the “broken windows” theory of policing. That theory, and the stop and frisk policies it produces, keeps the lower classes of New York in check despite the rulings of activist judges and three quarters of a billion dollars a year in lawsuit settlements.

Not since Bull Connor turned dogs and fire hoses on civil rights demonstrators has America seen a heroic Police leader so unconcerned with the politically correct whining of liberal traitors.

After helping build the intelligence service of the NYPD into a force that can place the entire Muslim community of the Tri-State area under constant surveillance, Timoney was called to Philadelpia to train it's police force. Philadelphia needed help with it's preparations to put down demonstrations against the Republican National Convention in 2000 before their so-called Free Speech Rights interfered with shopping or traffic. With John Timoney at the helm 391 people were arrested. Sadly they were given lawyers and trials. 100 plead guilty to minor charges and were fined less than $400 each despite several having bails set in excess of $100,000. Not one protestor got their richly deserved long prison sentences.

The proud city of Miami witnessed John Timoney personally leading his hand picked force of bicycle riding riot cops around the city from flash point to flash point, punching non-violent protestors in the face before their trip to jail and subsequent beatings and starvation. This caused him to be chosen to revamp the Miami Police Department in preparation for the coming protests against the Free Trade Agreement of the Americas in 2003.

John Timoney's direction produced a new method, known as the Miami model, of suppressing leftist riff-raff that is still in use around the world today. A wide area of the city was cordoned off and police were not sparing on their use of tear gas laden rubber bullets. Morale was vastly improved, with officers high-fiving after shooting unarmed lawyers in the back.

Outside the cordoned zone, mobile groups of officers knew they had real support from their leadership for the use of force on the scum constantly whining about their so-called rights. Immediately deploying tasers after approaching on bicycles, they did not hesitate to beat the twitching hippies before the tasers ran out of battery power. Heroically, John Timoney backed his officers as they kept the media from filming police actions to complain about later. He was a true American Police Hero, unafraid to make the press print what they are told.

Miami Police located a makeshift clinic in a basement the protestors were using to nurse their wounds like the vegan weaklings they are. Tear gas and stun grenades were used to force them out for their beatings to be completed. Protestors claim they found a strange white substance in the clinic afterwords and a single protest medic, Jordan Feder, decontaminated the space. He died two days later from meningitis. His family has the nerve to still be supporting a memorial web page in his name.

Timoney, along with his mentor Bill Bratton, were instrumental in building PERF, the Police Executive Research Forum. PERF is still lead by Timoney's friend Chuck Wexler, and brings together some of the best Chiefs of Police in the nation on it's board. These include former DC Chief Ramsey and Minneapolis Chief Dolan. Together they worked to coordinate a nationwide crackdown on the leftist so-called “Occupy” movement against banks in a three day offensive that resulted in over 15,000 arrests.

The leadership of Timoney and friends within PERF inspired President Obama to make them the core of his Task Force on 21st Century Policing. Combining their broken windows policies with community police philosophies nurtured under the presidential administration of Bill Clinton, they managed to house break hand picked members of the so-called Black Lives Matter Movement and get them to sign off on surveillance polices that will benefit law enforcement and the intelligence community for years to come.

John Timoney helped extend solid modern American policing methods overseas. With the help of Hillary Clinton's State Department, he was hired as a consultant for the Interior Ministry of Bahrain. There his new tactics helped suppress the pro-democracy Arab Spring demonstrations in 2011. Riot police carefully herded the riff-raff into narrow alleys before deploying hundreds of tear gas canisters on the trapped traitors to the Monarchy. At least three and as many as ten died choking before they could interrupt the flow of oil with their whining about rights.

John Timoney is survived by his wife Noreen, a former executive with ABC, and two adult children Sean and Christine. Funeral services will be held soon and in private, for those of you who have been holding your urine. In lieu of flowers, huge bags of shit can be sent to your local Fraternal Order of Police in memory of this great American Police Hero.