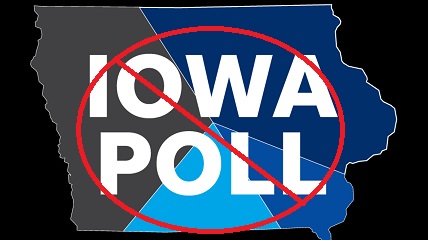 The Des Moines Register is THE newspaper of Iowa. Because Iowa is the first to vote in the primary season, polls and endorsements from this paper have been seen as the most important. Iowa wins build momentum. This year, there has been no final poll. The poll was pulled at the last minute, for secret and conflicting reasons and not shown to the public. This is the first time this has happened. For 19 presidential elections the poll has been a predictor and a driver of votes and momentum. How and why was this historic action taken? Who did it? What is their interest? Are the leaked poll numbers valid?

We will start with the stated reason the poll was not published. According to the paper “Today, a respondent raised an issue with the way the survey was administered, which could have compromised the results of the poll. It appears a candidate’s name was omitted in at least one interview in which the respondent was asked to name their preferred candidate.”

In a separate article that appeared the day before, also in the Des Moines Register, the preferred candidate was Mayo Pete Buttigieg. Buttigieg's campaign got both the Register and CNN (who helps conduct the poll) on the phone and got it pulled. Buttigieg's campaign statement, issued by spokeswoman Lis Smith, was extensively quoted:

"Our campaign received a report from a recipient of the Iowa Poll call, raising concerns that not every candidate was named by the interviewer when asked who they support," "We shared this with the organizations behind the poll, who conducted an internal investigation and determined not to release it. We applaud CNN and the Des Moines Register for their integrity."

So a single error, by a single phone operator caused the poll to be pulled after a single person complained to their campaign and somehow this got to influence CNN and the Des Moines Register. It is often said that the plural of anecdote is not data. There has been one graphic leaked on twitter that show the poll results, and show that Buttigieg's name was included. There has been a released poll, done jointly by channel 7 and Emerson College. This also included Buttigieg's name. These are both shown unredacted below: 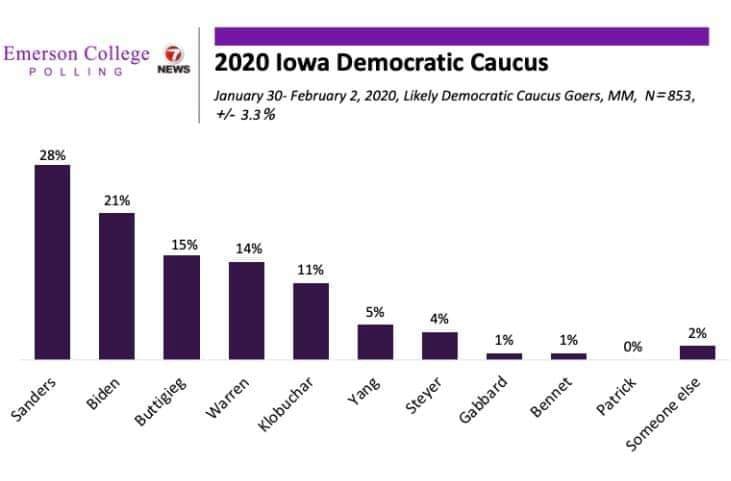 As can be seen, with the exception of Biden, both polls are within each others margin of error. The leaked poll appears to come from a social media marketing expert with no known ties to journalism or the political process. His twitter feed shows him to be a Sanders supporter. As he is not in Iowa, there is no particular reason to leak to him other than his relative fame. He has no particular reason to fabricate the numbers that can be discerned.

From this we can conclude that Buttigieg likely WAS included in the poll. Thus a single caller omitted Buttigieg from the poll once, coincidentally to a Buttigieg supporter and coincidentally to a supporter with access to the campaign at the highest levels. If we use the numbers from the Emerson poll, there was only a 15% chance that a Buttigieg supporter would be on the receiving end of any given call and Buttigieg had 1000 campaign volunteers in Iowa at last count by the Wall Street Journal. Iowa has 700,000 registered Democrats. Thus 15% of 1 in 700 is a two point one HUNDRETHS of a percent chance of happening.

The second possibility, which seems to be more and more likely, is that there was intervention to suppress the poll for some other reason. For that to be true we would have to examine possible bias on behalf of the polling entity for or against a specific candidate.

The poll is sponsored jointly by Register and CNN. It is carried out by Ann Selzer polling jointly with Mediacom, which is shorthand for Grey Mediacom. To Prove bias or potential bias a connection must be proven between the pollsters and interested parties. These connections can be made in material ways that include ownership, past bias, and past collusion.

We will start with Grey Mediacom. Grey Mediacom is listed as an owned subsidary of WPP PLC (NYSE: WPP), a London based advertising and PR firm. WPP also owns the Dewey Square Group, a Washington DC based PR Firm.

Dewey Square employs Maria Cordona, who is also employed by CNN. This tightens the circle significantly. She was a Senior Press Advisor to Clinton in 2008 and worked for as a key surrogate for the Obama campaign in 2008 and 2012. She was a Clinton surrogate in 2016 and was exposed in the DNC emails as vetting her anti-Sanders editorials with both the Clinton Campaign and the DNC prior to even submitting them to her editors at CNN.

This proves linkage between two of the polling entities and the Clinton Campaign previously. If Clinton loyalists were not actively counting the votes in Iowa specifically with a secret cellphone app this would not be material. If Clinton had not come out of retirement to denounce Sanders very rudely and publicly twice in the last three weeks this would not be material. But taken together with an absurdly low chance that the official story actually being true at face value and there is a very strong chance of collusion.

The editor in chief of the Des Moines Register, Carol Hunter, wrote a fawning endorsement for Clinton's failed primary bid in 2008. The Paper endorse her again in 2016. This year the paper chose to endorse the Centrist stealth candidate Elizabeth Warren after she had a closed door meeting with Hillary Clinton.

Take together, all the evidence supports the conclusion that the poll was suppressed because of interference from the Clinton camp that are still power brokers within the Democratic Party and a consensus building voice in the DNC.