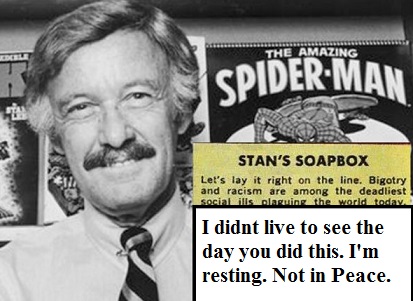 Heartbreaking decisions to end relationships are never easy. You will always love the other party, or at least love who they were. A song will always remind you of a special time, a feeling, a place in the space time continuum that brings you pure joy. Unlike the world of comic books, our universe has no alternates, time is linear and we can not go back and ret-conn things to a better outcome. Ending a relationship is ending something or someone is severing the connection to who they became, who they are now without their past self being a stumbling block to you being right with who you are now. In that spirit, this is not “goodbye Marvel.” This me wiping my ass with it's toothbrush and throwing its record collection out the window. I'll always love what Marvel was... But today it can get out of my house.

Marvel chairman Isaac Perlmutter is a Trump supporter and large donor. But that is not why I'm writing this. Censorship is why you are reading this. Perlmutter's decision to censor a single line criticizing Donald Trump in an introduction to an upcoming history of comics by Art Spiegelman was what forced me to do this. Part of the essay dealt with the anti-fascist nature of the roots of the super hero and explicitly called out Donald Trump as the “Orange Skull” in direct reference Captain America's first nemesis Red Skull. Perlmutter ordered the line taken out in order to further lick Trump's boots. Spiegelman withdrew the entire piece, as is both his right and his duty.

For those who do not have a life long relationship with comics as a medium or an understanding of comics as literature let me catch you up. As I evolved from a teenager to an adult, comics evolved into the expanding graphic novel medium. In the later 1980s and early 1990s, these works became the important cultural artifacts that film and television are just beginning to catch up to. The Watchmen and V for Vendetta, both hit movies, date from this time period as does Preacher (and yes, the book is always better than the movie). The medium also allowed Alan Moore to truth tell on the history of the CIA through Brought to Light and spawned the career of Neil Gaiman the creator of American Gods.

In the middle of this age of great literature, Art Spiegelman wrote Maus: A Survivor's Tale, the story of his father's survival of holocaust. This comic series, packaged as two novels, won a Pulitzer prize in 1992, being the first comic to do so.

This is who Isaac Perlmutter has censored and this is why Marvel can pack it's stuff and get out of my home, my heart and my life. The cultural gravity of this moment should not be underplayed or unreported. An author who won a Pulitzer prize for writing a first hand account of the holocaust was censored by a supporter of a racist president for speaking out against fascism. Let that sink in for yet another moment.

What does my boycotting Marvel mean? Am I going to burn my collection? I actually do not have a collection of comics, only graphic novels as the only things left from my teenage years are sealed juvenile records, old friends, bad memories and a US Army issue backpack that I use on laundry day. What it means is no more reviews of Marvel and the free publicity it generates. No more critical interaction with stories or materials. If Marvel spends its money like that it gets nothing from me. I might even stop pirating their movies.

That also means I will unpublish and remove all the reviews of Marvel products I have done on my website. All the words, words of praise and encouragement, words of sadness at cancellations, words of “what the hell!?!” at Iron Fist aka the neck-beard of destiny, are all going away. They get nothing. I will un-publish them all within the week. Yes they will still exist at archive.org because the internet is forever, but I will no longer associate myself with that brand.

Stan Lee has been dead for a year, his body is barely cold. In some alternate universe he would rise from the grave and slap the snot out of Perlmutter. But Stan Lee once said “Nobody comes back from the dead, especially not Bucky (Barnes).” Heros are fantasy projections of ourselves into allegories of our times and places. But we are us and we are in the here and now. This is why I'm asking you to boycott Marvel as well. They get nothing from me and hopefully you until Perlmutter sells out, goes home, turns his car on and takes a big old suck on the tailpipe. Goodbye Marvel.