How the Democratic Primary Can Be Rigged in New Hampshire 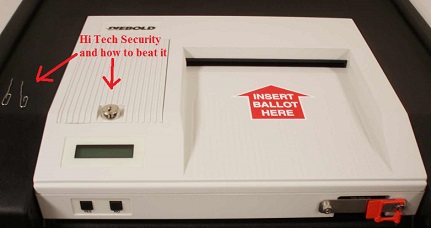 New Hampshire is a piece of America that is idolized but rarely examined. The popular image of small towns, direct democracy, strong traditions of in person public life and the very concept of a town hall meeting are neatly filed in the American public consciousness under the words “New Hampshire” and “Vermont”. New Hampshire, which in recent statistics votes 53% Republican in General Elections, is the first direct vote primary in this election season and a traditional momentum builder for any presidential contender. Because of it's tradition, and the use of of hand counted paper ballots, it would seem hard at first glance to rig a primary there. First looks can be deceiving.

As always there is new hardware in the mix. That hardware is made by relatively new company who has been peddling their wares since 2014. The product is a ballot marking device called One4All and is made by a company called Prime III. The device is basically an older model Dell tablet with all possible accessibility upgrades, some mumbled about security features and a printer. The voter at least gets a paper ballot produced. This is where any hope of integrity ends.

For 799,209 of New Hampshire's 980,720 registered voters the paper ballot will be fed in turn to an optical scanning device. Based on previous election behavior, with 60% of Democratic votes being cast by actual registered Democrats and 40% by independents, 369250 people should cast a vote in the Democratic Primary. Of that 369250 voters, 301,020 will have their vote tabulated on a machine known as the AccuVote OS. This is the machine pictured at the beginning of this article after having it's security broken with a pair of paperclips.

The AccuVote was originally built in the 1990s by Diebold and it shows it's age. After tabulating the vote, it will transmit the data via a phone line using a built in 2400 baud modem. Basically it is a 30 year old computer attached to a 30 year old scanner with 30 year old software and then it transmits the data via what amounts to a fax machine, which was first used during an election by Hunter S. Thompson in the writing of his 1972 book Fear and Loathing on the Campaign Trail in which he referred to the device as “the mojo wire.”

This author has not yet figured out every security weakness in a device with technology as old as himself, but he has examined the problem for 30 minutes and not 30 years. A brief look tells me that simply swapping the pre-programed memory card with another memory card and switching the sticker would do the trick. One would need a spare memory card and apparently two paperclips. The reader is welcome to find their own method of attack if they are so inclined as the user manual for the device is included at the bottom of the article for download. Have fun and don't waste too many paperclips.

Diebold, who is documented to have massively intervened in favor of George W. Bush in the 2004 election, no longer makes voting equipment. They concentrating on their core business, which is bank safes and ATMs. Their voting machine division was sold to another company, and then sold again after a federal anti-trust action. Their former division is now owned by another competitor Premier Voting Systems, which has not improved the machine or offered a replacement in the more than a decade that they have owned the legacy contracts for Diebold's equipment around the nation.

New Hampshire apparently prefers this legacy system for 81% of their citizens over the mark one eyeball and model a human hand, which have been in use longer but without failure. The use of a paperclip to violate the security protocol of the mark one eyeball produces an unmistakable alert but this security feature, still viable after millions of years of evolution, has not impressed the election equipment purchasing agents in New Hampshire.

This dual setup between optical scanning and hand counting has given election integrity advocates a very good opportunity to detect fraud on the part of the Democratic Party Leadership. There are enough jurisdictions using the hand counts to provide a sample where the vote count should not wildly diverge from the non-hand counted jurisdictions in terms of percentages between candidates.

Because of New Hampshire's breakdown of precincts by towns and the use of both counting methods in the same county in some cases, the urban rural divide, such as it is in the sparsely populated Granite State, should not be a barrier to detecting anomalous vote counts that fall outside any reasonable margin of error or standard of deviation. This is exactly what the Mockingbird intends to do in the day or two following the contest. Stay tuned.