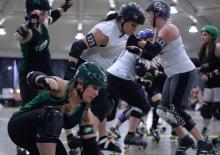 The OHRD 2016 season opening bout promised to be tough derby before it even began as Ohio's mighty mavens of mayhem squared off the Ann Arbor Brawlstars, a rising division two team. Ranked 56, Ann Arbor had skyrocketed up 29 ranking places in the 2015 season and not had to suffer roster cuts from retirements or transfers. Both the charter team and B-team bouts were projected to be tough, and those projections proved more than true.