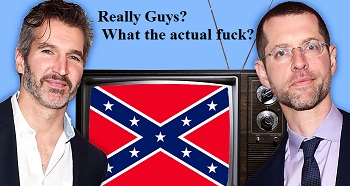 HBO's description reads “The series takes place in an alternate time line, where the Southern states have successfully seceded from the Union, giving rise to a nation in which slavery remains legal and has evolved into a modern institution. The story follows a broad swath of characters on both sides of the Mason-Dixon Demilitarized Zone — freedom fighters, slave hunters, politicians, abolitionists, journalists, the executives of a slave-holding conglomerate and the families of people in their thrall.”

That is a big description to unpack and a glossy paint job on a very dumb idea that fictionalizes an already heavily fictionalized time in American history and ignores the brutal realities of the American present.

The alternate timeline “where the Southern states have successfully seceded from the Union” has been done in science fiction. It was done twice by Harry Turtledove. Once he did it as a novel series based on a single plausible event, the Time Line 191 series, and once based on Afrikaners with a time machine and AK-47s. The latter was called “Guns of the South.”

The problem with the former premise, the latter being hopefully off the table even for guys who deal in dragons, is that no single event could have made the South win the war so long as the Northern political class was willing to fight. Thinking that a certain military blunder, if not made, would have ensured a Southern victory ignores the historical balance of forces.

What America needs to examine and address is the Northern weakness that allowed the war to go on as long as it did. That examination would be hurtful to the current telling of history. We would be forced to examine the white supremacist underpinning of Northern government, the cowardice and dizzying incompetence of Northern generals, as well as the weakness of the Northern military beauracy. America would be forced to realize that by war's end, the slaves freed themselves through force of arms. The bold statements this writer just made need backing, and they shall have it.

Slavery made great fortunes in the North, and in Britain. This is something that has mostly gone unacknowledged. Without Northern shipbuilding, Northern banking, Northern insurance, and Northern railroads to bring cotton to market, there would be no way to ship slaves or slave made products, nor would there have been the finance capital to buy and sell bulk goods across the Atlantic. Slavery may have been illegal in Boston and New York, but they, along with London were the economic center of the slave trade.

The abolitionist sentiment of New England was tempered by slave-holding members of Northern aristocracy, who held slaves until the very end of slavery's formal legality. The Dupont family, with Admiral Samuel Dupont badly botching the siege of Charleston, made a great profit off the family business, gunpowder, while holding slaves in Delaware as long as was legal. Northern slave owners were compensated for lost property when emancipation happened. Emancipation was a wartime economic tool not a principled human rights stand.

It is American tradition to name tanks after generals starting with the Civil War era ones. Both North and South were represented because of “national healing” and thus Lee and Stuart accompanied Grant and Sherman to victory. Northern incompetence lead to the need for Southern names as nobody would pit a “Burnside” with his reputation for stupidity against a Nazi “Tiger.” In keeping with the theme of incompetence, I would have loved to see Congress appropriate money for diesel power “Hookers” to be built in Detroit.

Beyond the incompetence of George Meade, who failed to end the war decisively right after crediting himself for Hancock and Reynolds' resolute stand at Gettysburg in the face of Lee's dullest moment, there was plenty more weakness born of political cowardice to be had on the Union Side. The lead Union General of 1862, McClellan, had no stomach for the fight, evidenced by his slow prosecution of what campaigns he did eventually mount and his run against Lincoln for president on an anti-war platform 1864. Lincoln won the election because of the swing vote of men in the army. The army wished to fight and die when it's former commander ran for office on a platform of surrender.

When Grant finally was given command of that army, he used it to hammer and bleed Lee in the bloodiest war of attrition the world had yet recorded in detail. The margin of victory could not just be attributed to Northern industrial strength and Sherman's pyromania. The numerical advantage was African American soldiers. Without those troops the numbers were closer to even. The slaves literally freed themselves, Lincoln and Congress merely put paper proclamations on battlefield reality.

Confederates, while being in danger of providing fodder for “lost cause” Neo-Confederates to stupid to realize their team was lucky to score as high as it did, also is in danger of missing the point that the South won the war politically. State's rights are something argued before the Supreme Court to this day. Reconstruction was incomplete, militarily unenforced, and inequality remains to this day. Neo-Confederates occupy positions of power in law enforcement, and a racist Southern partisan is Attorney General.

The concept of slave-holding conglomerates is not a fiction to be dealt with on HBO. It is a reality being resisted in Alabama and Ohio today. Slavery is legal as long as the overseer has a badge. That is in the amendment that “freed the slaves.” Alternate reality on HBO will not deal with that, for fix it, or cause “dialogue” that will “heal” that.

Slave trading is one of two crimes under international law that punishable by summary execution. The other is piracy. When one corporation subcontracts prison labor to another corporation it is a crime recognized the world over as a capital offense. In America it is a government contracting method that the Obama administration limited but did not abolish belatedly during it's last days in office.

Confederates as a show concept is not something that should be touched by anyone wishing to do a fine job of creating fiction for the thinking person with moral fiber. It will also fail to satisfy the need for historical accuracy from a community of history buffs who are very detail oriented. It might entertain the few whose curiosity never went beyond the 3 pages in the history textbook that had flags and arrows on the map. I personally will join the internet majority in turning my back on HBO and Dan and Dave if this moves forward. I will do so right after being sick.