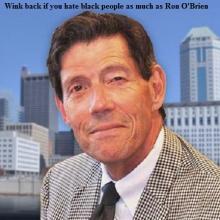 Here in Columbus law does not mean justice and police work does not mean investigation. That has been made clear again in the case of Masonique Saunders on today May 9th. 17 year old Saunders has been held virtually incognito by Franklin County for the five months and a day since she was belatedly arrested for the murder of her 16-year old boyfriend Julius Tate. She witnessed him being executed on the street by SWAT during a robbery sting operation. Another youth had been shot two days before.