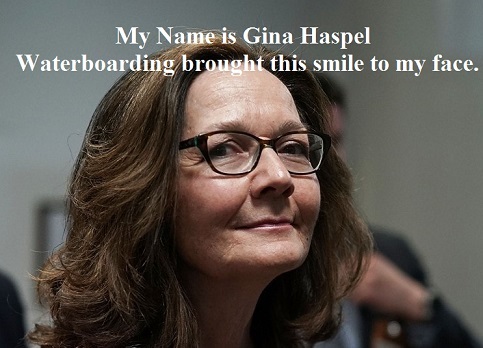 American media is in a race to the bottom. There seems to be no finish line, but this week the Washington Post seemed to be gaining ground in the pack on Fox News. On June 9th, it ran an Op-Ed endorsing Gina Haspel as the Trump nominee was in the middle of a raucous Senate confirmation hearing. This signals bi-partisan support for Haspel, who supervised torture at secret prisons during her long CIA career, despite opposition from large grassroots constituencies and small Progressive caucuses within the Democratic Party. Haspel was disrupted by chants of “Bloody Gina! Bloody Gina!” by one protestor who was removed. Another dissident, 78 year old CIA veteran and whistleblower Roy McGovern was slammed to the floor, dislocating his shoulder and then dragged from the Senate Floor by his injured arm in handcuffs.

The Washington Post's Op-Ed was penned by a former CIA field officer Karen DeLacey, currently running her own company that specializes in either “management consulting”. She is no slouch. She has a top secret security clearance (despite no longer working in government) and her (partially in Arabic) linked in profile claims she is a “32 year career as a certified clandestine field operative and senior manager in CIA's Directorate of Operations (DO). Directly responsible for leading intelligence teams, managing significant projects and budgets impacting US national security. Led complex human and technical operations overseas in collaboration with senior US intelligence, military and law enforcement leaders, as well as foreign partners in Africa, Asia, Europe, Eurasia, Balkans and South Asia.” In other words, she is Bloody Gina's career bestie, likely having been at working at the very same black site torture prisons that Gina Haspel ran.

Jeff Bezos owns the Washington Post. Jeff Bezos bought the Washington Post for the same amount of money that Amazon was paid to provide cloud computing services to the CIA. The deal for the purchase was brokered by George Tenet, former Director of the CIA. George Rennet has always been more comfortable with Democrats in office. The Washington Post illegally raised money for Hillary Clinton during the 2016 Election. Since the Pentagon Papers and Watergate they have been clearly Democratic Party aligned. Support for Gina Haspel is clearly bi-partisan.

Karen DeLacey's Op-Ed is one of four that the Washington Post ran in as many days in support of Haspel. One of the other three was by Robert Richer, former associate deputy director of operations for the CIA. Another, entitled “Gina Haspel is too qualified to pass up” was by Marc Thiessen. Thiessen was a speechwriter for Donald Rumsfeld and wrote a massively criticized book attacking the Obama Administration's backtrack from the use of torture entitled “Courting Disaster: How the CIA Kept America Safe and How Barack Obama Is Inviting the Next Attack.” Thieseen called torture “lawful and morally just." The final missive on the virtues of Bloody Gina Haspel was written by David Ignatius. Ignatius was also a torture proponent during the Obama administration. When not being “the mainstream media’s apologist for the Central Intelligence Agency,” according to 42 year CIA veteran Melvin Goodman, he is busy writing pulp spy novels. The parade of support signals bi-partisan consensus.

Four people who love a good waterboarding have written columns in support of Gina Haspel in four days in a single newspaper. That newspaper's ownership was financed by the CIA. Two of the four people worked with Haspel in senior operations positions while she busy torturing. Karen DeLacey is special because she wrote from a diversity in management perspective and tried to link Haspel’s incoming rubber stamp as an extension of the #metoo movement.

Gina Haspel has promised not to torture more people if confirmed to her job. This should not be believed. Spies are liars. Lying is not a negative in the world's second oldest profession, it is literal job qualification. Prospective CIA employees are graded on their ability to “embrace the lie” during their very first job interview. Lying to Congress is not something new to the shinning stars of the intelligence community. Lying is what we pay spies to do.

This week, we have former spies lying in a spy financed “media” outlet while other former spies who know the truth are beaten on the Senate floor while the spy in question promises not to torture and the Democratic Party calls it feminism. Gender equality indeed requires equal access to all jobs and equal pay for doing them. Some jobs should never be done. Torturer is one of those jobs.