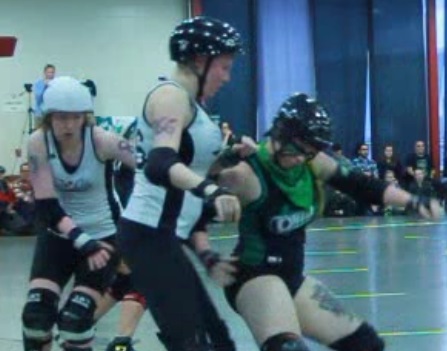 Both teams needed to meet certain benchmarks. The Ohio All Stars needed to double the Tri-City Thunder's score to remain in Division 1. Tri-City needed to make at least 40 percent of Ohio's score in order to remain eligible for the Division 2 playoffs. Rankings are based on a complicated formula that considers the scores and rankings of the last 12 bouts rolled by a team.

It would be rainy marching in the painful field, but Ohio's gayness and gilt were not besmirched as by the mass their hearts were in the trim.

The bout began with three low score jams, with Ohio picking up a total of eight and Tri-City getting five. Offense exploded in the fourth with a The Smacktivist executing a quad grand slam power jam that ended with a score of 31-5.

The Tri-City Thunder held the lead jammer position for the next three rolls, which resulted in a change in score of 35-15. Ohio methodically extended their lead subsequently to 71-30 by the end of the eleventh jam and then the explosive offense kicked in on both sides. Ohio's Bigg Rigg picked up a quick two grand slams in the twelfth and then The Smacktivist made a stunning play, when they came back from the pine bench to apex jump for their second grand slam and end the jam on the landing. It was now 94-31.

The Thunder immediately sounded back as Tri-City's Crazy Squirrel picked up four grand slams in the fourteenth. The rest of the half was a low scoring grind until The Smacktivist landed two grand slams in the nineteenth and then Lora “Outa My” Wayman overcame a power jam and a starting 3-2 pack advantage with only 15 seconds on the game clock to pull the score further ahead 129-62 at the half.

The second half started off with Ohio slowly and methodically extending their lead until the fourth jam when the Smacktivist slapped through another three grand slams and the score was 163-67. The defensive storm rolled on till the seventh and eighth rolls when Lora "Outa My" Wayman and The Smacktivist combined for four grand slams 185-86. The next three jams were nearly scoreless despite Ohio presenting a surprise split pack at the tenth starting whistle and a star pass from Chainsaw to Kitty LiquorBottom in the eleventh.

Lora Wayman took advantage of a power jam in the fourteenth for two grand slams bring the score to 222-94. Blitz Lemon tacked on another two points in the next jam and then Tri-City attempted a comeback drive over the next four jams. Despite controlling the lead jammer position for the jams, only Crazy Squirrel managed grand slams and Ohio held a 130 point lead going into the twentieth jam.

The Smacktivist held lead jammer for the next two jams and extended the Ohio's lead. Tri-City began their finally rally in the twenty second jam with only a few seconds on the game clock. Thunder's MeganTron rolled for 25 points bringing the unofficial final score to 258-129.

It was a very technical, disciplined low-penalty bout. With Ohio exactly doubling Tri-City's score and Tri-City breaking the 40% mark, both teams met their tentative WFTDA standing goals for the match.

Gang Green Vs. Plan B.

The second, B-Team, bout was between Ohio's Gang Green and Tri-City's Plan B. Although the score and outcome of B-Team matches do not affect standings, both Ohio and Tri-City have strong B-Teams that showcase top notch skaters. That made for a hard fought bout.

Ohio opened the bout with a double grand slam power jam by Karmabal Lectur while she was not lead jammer. The next two jams were low scoring back and forth rolls with lead jammer alternating. Val Holla ended the fourth jam with an apex jump, calling it just has her wheels hit the ground. The score was then 31-26.

Karmabal Lectur got herself three grand slams before being power killed in the sixth. Plan B's Scary Fury and Pity Affoo combined over the next four jams to tie the score at 34-34. After that it was Plan B's bout with Gang Green never regaining the lead.

In the eleventh jam Plan B's K. Skelton took advantage of a track cut penalty took the lead with three grand slams. Gang Green's Val Holla held the lead jammer slot in the fourteenth and Betty T. KayO held it in the in the twentieth. All rest of the jams, which ran to 21, belonged to Plan B. Tri-City used their domination of the lead jammer position to methodically advance their lead without big scoring jams. They found themselves 61 points ahead at the half with the score at 41-102.

With tough defensive play being the hallmark of the first half both teams seemed to focus their locker room talks on offense. Gang Green took two jams to get through Tri-City's tough walls, but when Tactigal caught herself a power jam in the third it translated into four grand slams. This momentum carried through the next four jams with Ohio simultaneously holding the lead jammer position and Tri-City nearly scoreless as they marched forward 80-135.

Tri-City's Agrosaurus took the lead in the eighth jam and picked up ten points. This was followed by a tough power jam during which Gang Green's Val Holla passed the start to Karmaball Lectur and the score was 88-153. Gang Green held led jammer for the next three jams but barely inched forward.

The both teams exploded into an offensive race for the end of the second half. In thirteenth jam Gang Green's Karmaball Lectur caught a trip to the pine bench for an illegal star pass to Tactigal which gave Tri-City's Pity Affoo a power jam and brought the score to 96-174. Gang Green answered with a power jam augmented star pass from Val Holla to Betty T KayO in the Fourteenth and a triple grand slam power jam by Elektra Magneto in the fifteenth. The score was 128-191, leaving Gang Green within striking distance of a win.

Jam number seventeen saw track cut penalties for both teams near simultaneously and the resulting dispute about penalty bench time caused and official review. The result was Tri-City's Skelton translating a power start in the twentieth into a seven point pickup. Gang Green's TactiGal took lead jammer in the nineteenth for nine and the stage was set for a nail biting final twentieth jam.

With only seconds left on the game clock, thus guaranteeing a full two minute jam, Betty T KayO took the lead jammer position with a come from behind photo finish just within our home town heroines' grasp. But it was not to be. During a power jam Pity Affoo completed a star pass to Scary Fairy and five grand slams resulted. Tri-City got the result Ohio needed and the bout ended with a score of 141-227.

We will join our hometown heroines again on May 14th for their doubleheader bout against the Carolina Rollergirl All Stars and Bootleggers from Raleigh NC.