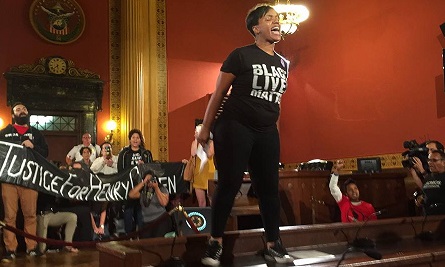 Led by the People's Justice Partnership and relatives of Henry Green and Tyre King nearly 200 people took over City Council Chambers during their weekly meeting to demand justice. City Authorities had prepared new roadblocks to public participation for the event including requiring photo identification to enter the building and extra police on hand. New rules were in place limiting the total number of people permitted to attend the meeting to fewer than the total number of seats in Council Chambers.

The meeting began with the national anthem blaring through the speakers. The Protestors all kneeled and remained kneeling for the pledge of allegiance to the American Flag which immediately followed. The two patriotic rituals were followed by a long platitude filled prayer led by an aging white minister who thanked his God for people's democratic participation.

The invocations and platitudes to divinity were immediately followed by a rambling speech by City Council President Zach Kline also praising people's participation and reminding them of City Council's rules which would not allow the deaths of Henry Green and Tyre King to be addressed until the end, after most people and the media had left.

Henry Green was shot without warning by two plainclothes police on Jun 6. 13 year old Tyre King's death came less than two weeks ago when he was shot in the back by police. The police narrative regarding the murder of King is disputed by every single witness that does not have a badge. Official comment has not been made since because of an “ongoing investigation.” In an interview with ESSENSE magazine family attorney Chandra Brown stated “"There is a young boy that was killed and the actions that the police department has described — saying he was reaching for a gun — the family is convinced that those those actions are completely outside of Tyre’ s character."

Many area residents witnessed the immediate aftermath of King's murder as it happened in full view of a church during services. Both murders are tied to the City's “Summer Strike Force” program which has been re-branded as a “Summer Safety Initiative” in line with Chief Jacob's views on community policing.

After Klein's Trump-esq ramblings about participation resolutions were proffered by council members who wished to give awards and recognition to various city connected non-profits for working with police in economically disadvantaged neighborhoods as part of a campaign to make Columbus better.

The crowd grew weary of stalling and protestors immediately and directly shouted their key demand and asked for Council to make a commitment to it. This demand was the defunding of the Summer Strike Force for 2017.

After three interruptions Zach Kline attempted to take control of the meeting and failed at which point the galleries errupted with chanting and protestors took control of the actual dais where City Council meets.

City Council withdrew on instructions from police and Chief Jacobs moved to take direct tactical control of the scene. A cordon of about 20 officers was placed between protestors and the door through which the City Council head fled. They were accompanied by chairs of several neighborhood commissions and officials of City approved non-profits that had earlier received awards for their cooperation with Police in “making Columbus a better place, a great place” according to Kline.

Council President Kline is currently running for prosecutor where he hopes to replace Ron O'Brien. O'Brien has refused repeatedly to meet with the family of Henry Green or bring and independent investigation into his or Tyre King's murder.

Protestors occupied the council chambers for over an hour before moving outside. They alleged that Council were cowards that were unwilling to meet with them or address them directly but a peek inside the back room (which is ironically green) were Council and their lackeys waited there I witnessed people smiling laughing and playing on their cell phones. They did not seem the least frightened that the police practice of shooting children in the back would have to change.

Protestors vowed to return next week and continue pressure. As I returned to my car I witnessed a an unnamed detective trade smiles and high fives with a uniformed Sergeant whoose name plate read “MacNamara” after jokingly saying “cops and the klan go hand in hand” in reference to a slogan from the 1990s. He looked at me a smiled and said “That's what they say about us.” I told him I was a journalist and he hurried away.