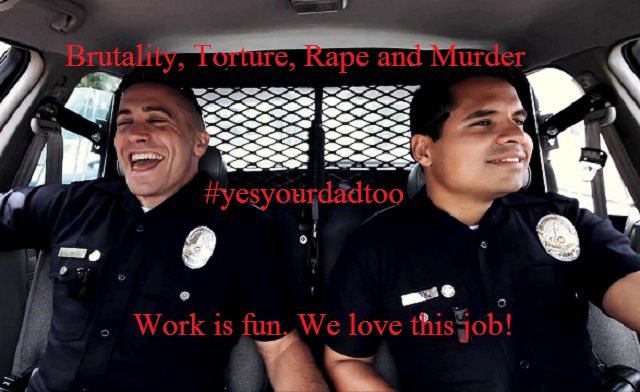 It is time to put my unique part into the public dialogue and bring my perspective. There is a silence that lingers in the background of human rights discourse in this country and it needs to be broken. That is the silence on police brutality by people that know it is happening: The health care providers, the teachers, the bartenders, and in my case the officer's families. I break this silence at risk.

I've fought Nazis all my adult life. I have been effective enough for them to know my name and be angry with me. They are very concerned about what percentage of Black or Jewish or Turkish I might be. They discuss my ethnicity on their forums. Matt Hale, when he was not in prison, speculated that I was a “Quadaroon” or “Octoroon.”

I have publicly concealed my family history, my ethnicity and my American regional cultural heritage to protect my relatives from the consequences of my actions and convictions. Fascists target families of dissenters. It doesn’t matter if that fascist is a Neo-Nazi or a Cop, or (as they sometimes are) both.

I am white. My family immigrated here from Europe in the 1920s. I know what villages my grandparents were born in. I can trace my ancestors back to the edge of written church records. My people were poor. They had always been poor. Prior to 1500 their names were not worth writing down. My parents were divorced when I was young. My father's side of the family is full of cops.

Relating to Baltimore I could write in detail about the police brutality I experienced and witnessed as a teenage petty criminal and as an activist. I could relate about the incident I was maced and beaten while handcuffed in a police van. I could tell the story of when I was pistol-whipped while handcuffed in an alley, then beaten in the ambulance, then beaten at the hospital. Yes the care providers saw it, no they were not in the least bothered, two of them helped. No I was not resisting, I was being questioned. That was the worst but not the first. When I was a younger child than that I was hung by my handcuff chain from a hook or peg (wasn't paying attention to that detail) while policemen took turns punching me in the gut. None of these things are very important. The casual atmosphere of those moments made it clear that the people that did these things me do it every day.

My left arm is an unfinished graveyard. I get a tattoo on it for every friend killed by the police. I am a couple of tattoos behind. Good ink is expensive. Bullets and life are cheap. Only one of them had even held a gun in their entire lives. I won't roll call the dead. Civil society held no one accountable for their deaths the first time. Even the one who filming the police when he was shot has not gotten an accounting for his death. Those stories are also not what this is about.

After more than two decades of activism, I have a long list of friends who have been abused by police. I know people who have been beaten, raped, choked, gassed, shocked, starved or otherwise tortured while in custody. These things have happened to friends of mine in every city and state that I have lived in. One or more of these things has happened to me in every region of the country. This is not aberrant. This is not the new normal. Police brutality is a fact of life, like taxes, old age and death. I won't tell these stories. They are not mine to tell. These stories are also not what this is about.

This is about my family. My uncle was a police captain. He was always soft spoken and kind. He was a gentle giant in a family of exceedingly short people. He was my favorite uncle. He hurt a lot of people.

When I was younger there were children I could not play with and houses I could not go to. This was because of the beatings my Uncle gave their parents when their parents were in High School. He would take them to the railroad tracks behind the high school football field and beat them bloody for such crimes as a curfew infraction. He set an example for brutality in the 1960s that his subordinates and peers held in high regard in 1980s and 1990s. I know because policemen who beat me bragged about it.

My father was a self employed accountant. Because of my uncle's prestige he worked from home and many of his clients were cops. In the summer of 1992 I visited my Dad. I had an internship nearby. There was a county park policeman there. A county park policeman should not be confused with a county sheriff or a county policeman. Three times the troughs means three times the piglets bought with three times the taxes. I walked in to hear the following: “So, it was like 6 am and we go behind the bushes and there was this guy fucking a great Dane, So we kicked his ass you know. Then we held him down and let the dog fuck him for a while, see how he likes it.” He did not pause when I entered. He paid me no mind. Because I just didn't matter.

Let's unpack that scene. This cop was patrolling a park at 6 am. People have been killed by police in this park during stings they run on gay men trying to pick up dates. Because they considered it prostitution. At least one was shot for resisting. It happened while he was in town for my 20th high school reunion. I don't remember him from school. He was black and a banker, he could have ordered a prostitute to his hotel. He was apparently out looking for anonymous sex with a stranger. He was killed for being black and gay in the wrong place at the wrong time. So at 6 am this cop was out looking to hurt people for being gay. He found somebody raping a dog. He then had the dog rape them in order to teach them that dog raping is wrong. Then he was so happy with himself he ran right out and told his accountant. This man was not a rookie, he was a veteran sergeant and older than my father. That is who and what these people are.

I used to join my father's family for dinner on Christmas Eve. My father sometimes invited the a friend of from his collegei days and his family. His friend had a stepson who had always been a bully and an idiot. I had known him since he was eight. He was twenty five that year and had finally become a policeman in my hometown. This happened after he failed the psychological test to be a fireman three times. He was proud of himself. He already had that rookie cop uses a quart of hair-gel a day haircut. He laughed in my face because cops were still telling stories about how much fun it was to kick my ass in the locker room years after I left town. It was going to be a lovely Christmas. I avoided discussing politics over diner. Nuclear weapons somehow still came up. He suddenly blurted “I like nuclear weapons. We should nuke Africa and kill all the N*****.” A closer examination of that is in order. This man just called for nuclear genocide against an entire continent at Christmas dinner in front of his mother. He did this after being proven too insane to operate a hose or a ladder. He was sane enough to be handed a gun. My whole family looked at me to enforce silence. Nothing he said warranted a word. Any word from me would have spoiled Christmas.

I remember my father's funeral. It was 1998. I remember eating with that whole side of my family. My uncle, the retired police captain, was there. So was his son the Narcotics Detective Sergeant. So was his grandson who was already being groomed for a career in law enforcement. So was my grandmother. My cousin was holding his son on his knee when my uncle said “Remember, when you get them in the cell kick the shit out of them don’t use the plunger.” There was laughter around the table. “It gets the pressure groups all upset.” he added. All my cousins looked at me with blood in their eyes. Had I said a word I would have had to fight them all. This man just made a rape joke at his brother's funeral in front of his mother and grandson. Yet somehow the potential of my objection was cause for unspoken threats. I did not say a word. To any of them. Ever. Again. Today is the day I say the words. Pressure groups? Is this 1953?

Everybody keeps the code of silence. The health care providers. The wait staff in the dinners. The bartenders. Most of all the families. If I am witness to all this, how many “Good Cops” are witness to all this? Their silence and inaction is deafening. How can you be silent about brutality, rape, torture and murder and still be “Good?”

I never mentioned my actual ethnicity in this other than third generation immigrant and white. I never said where I grew up. This is not to conceal anything. I did not mention it because it does not matter. I could be from anywhere in the country and the facts would be the same. I could have any ethnic heritage and the facts would be the same. The only thing that makes my experience rare is enough travel to know it is the same everywhere in this country. The things that happened to me as a kid happened in very progressive college town. Voting Democrat shields one from the truth, it does not shield society from reality.

When I saw the pictures of Abu-Gharib I knew I was home. Black sites and torture are as American as a parade down main street on the Fourth of July. They are part of the cultural glue that binds our society together. Murder of a young black man who committed no crime in Baltimore is also very American. He had the good sense to run for his life when he saw a policeman. His murder and the government's reaction to it are racist. That racism is as American as the apple pie at the bar-b-q after the parade.

Brutality and murder is how our uniformed men show their patriotism and dedication. These are normative actions and values. All of them are guilty. The least they can be guilty of is silence. That silence is unlikely to be about a solitary incident. In answer to the guy on twitter who I am gentle enough to not name:

Yes... Your Dad too. No really #yesyourdadtoo