Orange Frankenstein: How Clinton, the DNC and the Media created Trump and promoted bigotry and how that backfired. 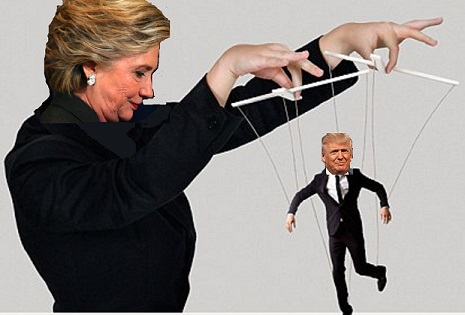 Wikileaks continues to be a goldmine. In the Podesta email files there is a strategy document so called the “Pied Piper” memo. Although both Salon and Politico found this memo first, one of the Mockingbird's researchers located it independently and editorial back checking located two tepid mainstream articles. Politico, which is implicated in this scheme, published on it two days before Salon. The memo itself is a huge smoking gun with both barrels pointed directly at the face of the public.  The memo is availible for download at the bottom of this article.

The unsigned memo itself was dated April 7th 2015, and is an internal DNC document. It was forwarded to Clinton's senior campaign staff by Marissa Astor, assistant to Clinton Campaign Manager Robby Mook, on April 23rd 2015. Clinton Announced her candidacy on April 12th 2015. Thus the Democratic National Committee was planning for Clinton to be the anointed nominee before her candidacy was announced.

Thought and preparation went into the document as it was clearly not a draft on April 5th “This memo is intended to outline the strategy and goals a potential Hillary Clinton presidential campaign would have regarding the 2016 Republican presidential field. Clearly most of what is contained in this memo is work the DNC is already doing. This exercise is intended to put those ideas to paper.”

As part of a three pronged strategy the DNC and Clinton campaign's plan was to “Elevate” the most right wing elements of the Republican Party to use as a “cudgel” against Republican moderates as a whole. This strategy called the less moderate Republicans “Pied Piper” candidates that presumably would lead rats out of town. Donald Trump is specifically mentioned at the in that list of three with evangelical anti-LGBTQ bigot Ted Cruz and Ben Carson.

Trump did not even announce his entry into the race until June 26th 2015. Thus the DNC was planning on “Elevating” the Trump candidacy to the press months before his announcement. The Democratic campaign planned to “tell the press to them” seriously. Clinton's campaign, in the words of her staff and the DNC, was based on promoting bigotry so that it could be run against.

When coupled with late campaign moderate Republican defections and postmortem calls for “unity” and “giving Trump a chance to govern” this strategy indicates a pro-bigot and pro-business triangulation to the bi-partisan right by the Democratic establishment in both the White House and on Capitol Hill.

Hillary Clinton, who once called black teenagers “super predators” who “must be brought to heel” as dogs are, along with her handlers clearly had no problem directly fanning the flames of bigotry in order to win. The “tell the press to them strategy” becomes more sinister in aspect when one considers the close revolving door between the Clinton Campaign and the beltway press corps.

In a previous batch of leaked emails, the DNC and the Clinton Campaign were caught editing articles for CNN before the editors at CNN had even seen them. It was clear from the email exchange that former Clinton White House staffer turned CNN columnist Maria Cardona was used to said work flow. When told by DNC to seek additional approval from the Clinton Campaign. Her reply “okay I'll check with them” shows she did not need to ask for an email address or even a name. Cardona was instrumental in late campaign attacks on Trump over his immigration “policy”, fanning the flames of fear that her handlers and former bosses used her to create in the first place.

Politico, which actually reported on the memo critically in terms of strategy but not in the effects of that strategy on the safety and lives of ordinary people, was also an insider to the Clinton Campaign. The biggest complicit insider however, was the Washington Post, which was holding illegal fund raisers for the Clinton Campaign was also along for the ride.

The Washington post dialed up attacks on Trump's blatant and obvious racism as the campaign intensified in order the increase fear on demand, but with their huge base in resources only once noted Trump's father's arrest during a 1927 KKK rally. The Washington Post ran a brief story on this in late February but failed to press the issue during the primaries, as the “Pied Piper” was needed to play his tune and lead the rats away from the rest of the Republican pack.

The memo paints a clear picture that the key leadership of the Democratic Party and the Clinton Campaign sought to build a dysfunctional family dynamic in America of “Vote for Good Mommy or Bad Daddy will beat you.” The election is over and the staged marital spat of the elites is over, but not without consequences for us children.

A fictitious mad scientist once poured lighting into a sewn together collection of corpse parts, breathing new life into the apparition. As in Shelly's fiction, Orange Frankenstein has strangled the mad scientists bride. Unlike Shelly's fiction, we are on the ice raft with him “He was borne away by the waves and lost in darkness and distance.”