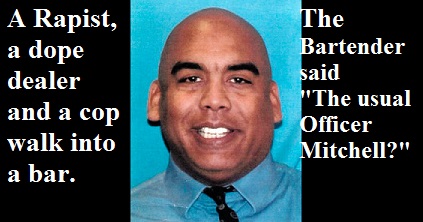 The family of Donna Dalton-Castlebury expressed tenative relief this week Andrew Mitchell, a 31 year police veteran and vice cop, was arrested on charges by the FBI. He was charged in connection with his apparent pattern of forcing alleged prostitutes to give him sexual favors in his car in exchange for not being arrested. He is being held without bail and the City of Columbus is “reviewing” weather to overturn some or all of the prostitution arrests he made in the last year. Mayor Andy Ginther quickly put out a self-congratulatory press release asking for more information. Andrew Mitchell faces no charges in state court and the Columbus Police have as of yet done not one single thing.

It would seem that the wheel of justice has finally turned, yet this is not the case. Mitchell, who was openly alleged to have been involved in a pattern of drug dealing and robbery by both this publication and the Columbus Free Press, has not been charged with those crimes for which there are ample witnesses and has not been charged with the murder of Donna Dalton-Castlebury.

Indeed the FBI's charges are not for the protection of the people, but are charges for the defense of the role of police. Mitchell is charged with kidnapping under color of law, witnesses tampering, lying to federal investigators and obstruction of justice. In short he is charged with crimes against the state and legal procedure. He is not charged with having sex with prostitutes in exchange for not arresting them, he charged with taking prostitutes to a secondary location to have sex with them.

Mitchell later arrested several women that had previously coerced into sex for free. This has put some of the convictions garnered in his tenure on the vice squad since 2017 in doubt. He had previously arrested Donna Dalton-Castlebury in the same manner. Rolling Stone somehow managed to parrot the police line that the stalled investigation into her death as somehow “unrelated.” Franklin County Prosecutor, who has yet to meet with her family has yet to actually bring any evidence to a grand jury and has not prosecuted a police officer for a killing in his more than 20 year tenure in office.

Coercing a person into sex with threats is called rape. That is how Harvey Weinstein raped half of Hollywood and has been finally charged with some of his crimes because his targets were wealthy and famous. Andrew Mitchell has not been charged with rape because the lives of poor prostitutes do not matter to the FBI and do not matter to Ron O'Brien either. It goes without saying that anyone shot by a police officer does not matter to the City of Columbus.

There is are two terms for this attitude that this author has learned in the course of this investigation. The first is “less than dead.” The other is “NHI” which is short for no human involved. The latter is used by police on the west coast and the former in the east. Both denote the status of a prostitute as less than human, never really alive and thus their death is not even a real occurrence other than a paper work blip, it is a natural phenomena like a stone falling to the earth.

It is not as though neither the local or federal government would benefit from treating Andrew Mitchell as a gangster who happens to have a badge rather than a “bad apple” cop. He has confederate working with him. He travels out of state. His actions, in addition to rape, are also extortion. He has accumulated wealth over many years of this which is reflected in his multi-million dollar real estate empire. A pattern of corrupt activity that includes prostitution, extortion or murder is called racketeering. That would open him up to RICO laws and allow the federal or local government to seize everything he owns.

By their own actions the FBI and local government have proven that even with the ability to seize millions in forfietures they choose not to because the act of whitewashing their own authority and not digging deeper is worth more than all the ill gotten gains Mitchell received during his 31 year criminal career as a police officer. This also proves without a doubt that the lives of citizens, the bodies of women, and the actual safety of people with worth not one thing when held against keeping the blood and dirt from tarnishing the brass badge of veteran Columbus Police gangster.

Multiple women have come forward and made statements to multiple news sources stating that many officers who were not Andrew Mitchell engaged in the same pattern of rape. When queried about this the police of course made the bland statement of “We encourage anyone to come forward...” when they had already come forward and the corruption of the entire vice squad is long running and well known.

Andrew Mitchell will wind up as a small singular sacrifice to keep business going as usual. The office betting pool here at the Mockingbird is giving 1-2 that he will even keep his pension.