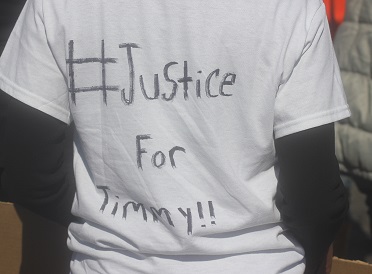 It is not easy being number one. Columbus is the best in the nation at only one thing. When it comes to the killing of black people, the Columbus Police Department is the New York Yankees, a dynasty team of history. Although they end more black lives per capita than any other metropolis in the nation, this time they did not extend their Babe Ruth like record as well as they clearly intended.

Timothy Davis walked into a convenience store in his own neighborhood to get change. Undercover officers followed him in, attacked him, handcuffed him, and continued to beat him five on one. He was stripped naked and left in a coma. Four uniformed officers showed up to join in the beating. Video clearly shows cops screaming for him to put his arms behind his back while holding his arms forward. The video clearly one cop repeatedly stomping on his head. Another screams “Got that taser? Tase this motherfucker!” The scene rapidly spirals into an orgy of violence where 10 white policemen beat him, while one attempts to block the camera and the store owner tries to seize the camera. Clearly they are not proud of what they are doing.

He is now out of his coma. Court Records show he has not even been charged with a crime although he appeared in is court in a wheelchair. He needs dialysis and the full extent of the injuries to his internal organs from blunt force trauma are still not known.

He was not beaten half to death for nothing, he was beaten mostly to death for nothing, as the video above shows. The undercover officers were party of the so-called summer safety initiative, which targets youth in majority black neighborhoods during the summer time. It has been extended year round by Mayor Ginther despite constant pressure on his office after his non-response to the murder of Henry Greene.

His Aunt, Evangelist Catherine Shaw, posted both the video of the incident and her reaction to it on Facebook. According to Shaw the video, shown above got over 1.2 million hits. Shaw was locked out of her account by parties unknown who began sending messages that the rally scheduled for today, September 9th, had been canceled to all of her contacts. Clearly somebody does not want this discussed.

It took the family some time to find where Timothy was being held in a coma, and the full extent of his injuries are not clear. The Columbus Police have disappeared wounded people and held them incognito in a hospital before, as we reported here last year.

The Mayor, Police Chief and internal affairs are, as usual, publicly mum on this case. Perhaps they are hoping that it and most of the black community will die quietly off camera. No investigation has been made into the hacking of Catherine Shaw's account, it's use in an attempt to silence protest, or the incident itself. All of those things are federal crimes.

The rally began at the Driving Park Library and proceeded as a march down Livingston avenue to the very story where Davis was brutality beaten by 5 policemen within an inch of his life. A member of the local activist People Justice Project, Hana X Abdur Rahim, said during her speech “The System isnt broken, it is functioning as intended.”

The demonstrators called for the removal of Columbus Police Chief Kim Jacobs as well as the resignation of the Mayor.

The Mockingbird will continue to cover this story and the response, or probable lack thereof from local government. Unlike a facebook post, we can not be made to go away.