Its hard to watch Star Wars with your cousin when it begins with a jackboot to your teeth. 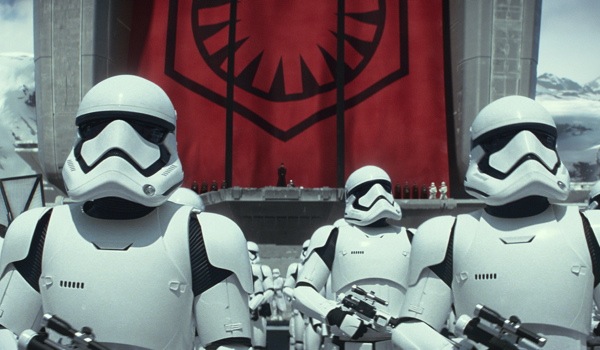 Its that special time of the year when people do the holiday-family thing: food, gifts, reunion, togetherness, movies. Its also a special time of a generation when my family can introduce its youngest member, my cousin, to the magic of the ultimate myth: Star Wars. I saw Star Wars in the theaters as a small child. It was magic. I was so anxious to pass that magic to my young cousin 38 and change years later.

That couldn't happen without National CineMedia (NCM) subjecting me to 10 minutes of advertainment that seemed to be nocturnally emitted by Joseph Goebbels cuddling languidly with Nancy Reagan and Robert McNamara. It consisted of four back to back commercials in the middle of NCM's flagship pre-show product First Look. Despite it's October pledge to accept no political ads during the current campaign because of “distraction and negativity,” NCM appears tone deaf to the actual lived political realities of a young and multicultural audience.

I had stepped out to the restroom and returned to be greeted by a white screen with black writing above the coat of arms badges of four police departments and black writing below them. The writing above contained “officers” and “polite” and the writing below contained “...comply. Complain Later.” I was too aghast to get the whole thing before First Look moved on my next helping from the Reich Ministry of Truth but I don't need google translate to understand “Shut the Fuck up and take it.”

A best case world, where officer friendly is polite and people complain to helpful and attentive oversight groups, simply does not exist. Yesterday morning in Chicago, Bettie Jones tried to open the door for police at the behest of her neighbor who called them. She can't complain later. The police shot her in the throat through the door. She died gurgling blood in her foyer in her daughter's arms as the police went upstairs and shot her neighbor's son seven times. Merry Christmas from the Chicago Police.

The next “public service” announcement on the same screen featured two parents being too busy on the phone to pay attention to their daughter. It ends with their daughter incarcerated for under age drinking. The message is clear. Control your children or we will lock them up for victimless quality of life crimes that are legal behavior for adults. The actors portraying the family are white. Had the fictional child been black and male it might have ended differently. However, in the non-fictional real world, black children are killed by police in parks, and young black adults are shot on video in Walmart.

These two law and order messages were followed by two back to back recruiting ads, the latter for the Air Force. It showed happy airmen and airwomen doing exciting and technical things. It ended with the chief of Staff of the Air Force, General Mark Welsh, saying “These are my heroes.” It did not mention his previous assignment from 2008 to 2010 as the Associate Director of the Central Intelligence Agency for Military Affairs, which means drones and kidnapping. No drones were shown in the advertisement nor was drone training -- "Okay cadet, line the crosshairs up with the red letter t on top of the hospital and push the button."

The current air war in the middle east was purported by the US Military to have only killed six civilians this year. This magic number of six does not include the 12 medical personnel and 10 patients killed when a the Mark Welsh's heroes bombed a hospital run by Doctors Without Borders this past October in Afghanistan. Indeed, Mark Welsh oversaw a major escalation in the drone war and it's attendant civilian casualties, which now admittedly can not be accurately counted.

Taken together, these four back to back spots could only have been more hamfisted if they were blared out of loudspeakers. It took me another 20 minutes of previews and trailers to settle in and enjoy the magic of Star Wars in all it's reborn goodness. I was stuck for the ride home reflecting on how to write this rather than the genuine warmth of Carrie Fisher's smile.

Dear NCM, I sit through 40 minutes of advertisements so that I can watch the Dark Side self destruct and the Empire loose, not have real imperial stormtroopers stomp me in the face. Dear Regal Cinemas, your overpriced cookie dough treat made my little cousin sick to her stomach. This is why you loose revenue to file sharing.