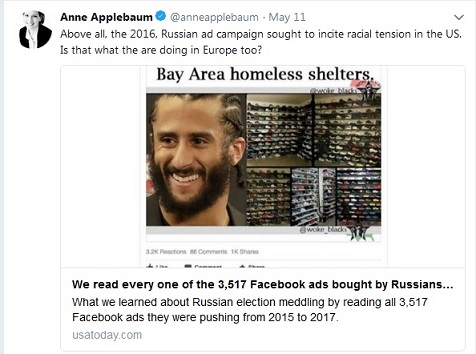 On May 11th, the USA Today published a multiple by-line story on their analysis of every single one of the 3517 Facebook Ads bought by shadowy sneaky Russians to influence the 2016 general election. This report, based on an indictment issued by Special Prosecutor Robert Muller, claims to show a focus on race and policing rather than guns and Benghazi. The story was given amplification by former Washington Post editor Anne Applebaum turned columnist and professor, with a stamp of academic authority that it does not deserve. The fact that it was worthy of her comment, along with leading graphic of Colin Kaepernick, ram home the message from the Democratic Party controlled center – If you are against police murder, you are Putin's tool.

Before delving into Applebaum's neo-McCarthyte connections and ideology, we should look at the actual stats of this little bit of so-called Russian Election hacking. A total of 3517 ads were purchased. They got a total of 50 million views. That number represents eyeballs, not fingers. No stats were given on how many people actually clicked on ads and read the articles. Considering the cost of eyes versus the cost of fingers in internet advertising, 10% would be a safe number with targeted ads. So Russian election hacking, which is really Russian election trolling, boils down to 5 million people might have read something Applebaum, the Washington Post, and USA Today think you should not be allowed to read.

Only 100 ads even mentioned any candidate specifically, but we will pretend at all 100 were anti-Clinton. That means that Russian election hacking in this cases amounted to a little under 160,000 actual content clicks between 2015 and 2017, or 7000 per month, with ten times that many scrolling past. More people saw Applebaum's tweet on the issue as read an actual Russian sponsored anti-Clinton article. Raw numbers show that the Russian trolls are completely incompetent and nobody in America actually cares hear what they say about Hillary Clinton.

The report focused on the fact that over 44% of the ads made “explicit references to race.” If it was direct Russian sponsorship of actual white nationalist messaging, USA Today would have seized it as a major headline. Things like that sell newspapers. Explicit references to race means talking about racism. Applebaum calls this inciting racial tension. 8.8 percent of the ads were about actual cases of police brutality and murder. Under 20,000 more articles reads per month happened where the topic related to police abuse per month because of Russia. Applebaum calls this inciting racial tension. This is because she thinks the uptick in police murder of black people since the Ferguson uprising should not make people tense without Russia. It is as if I need to be talked down from being angry by a professor at the London School of Economics over my city, Columbus Ohio, is #1 in police killing of black people per capita.

Applebaum has fellow travelers, like Tim Snyder, in neo-McCarthyte circles have outright called for censorship in order to bolster political support for the failing center of the west's neo-liberal project. Snyder penned an article, also in the Washington Post, advertising censorware to ad to your browser to block or alert you to links that “promote Moscow's line.” It was discovered that the censorware blocked all kinds of home grown long standing left news sites like Counterpunch. This is also the overall strategy of the Democratic Party, which the Washington Post illegally raised money for, of “screaming right and then punching left.”

Applebaum and Snyder don’t only cross paths on this issue at the Washington Post. Both review all the same books. Both were Marshall Scholars. Both taught are affiliated with the London School of Economics. Both have lived and worked in Warsaw. Applebaum has is more closely tied to Poland, as her husband, Radosław Sikorski in the former Foreign Minister and former Minister of Defense. Snyder and Sikorski attended Oxford at the same time where the latter was a member of the famed Bullingdon Club with former UK Prime Minister David Cameron. Cameron was later revealed to have put his penis in the mouth of a dead pig during a Bullingdon Club event. Reports of this event, reputedly witnessed by over 40 people were published in the UK Daily Mail 2015.