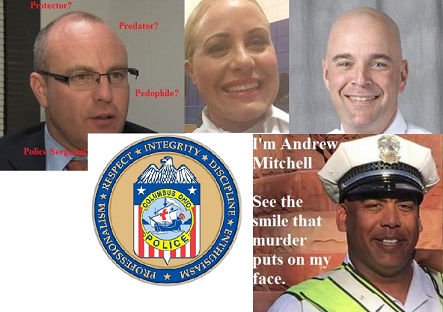 This summer has been a public relations nightmare for the Columbus Police. It is hard to get the public to believe that you are doing good things when your number one copsplainer is in jail awaiting trial on multiple child pornography charges. Seriously uncomfortable questions might be asked if they promote the 2nd shift Special Victims Unit Sgt Terry McConnell who pays minors for sex, or maybe not. Columbus Police only direct their press releases to three media outlets: The Dispatch, Channel 10 (ie Dispatch TV) and Channel 6 (a Sinclair Broadcast group station that is required to run right wing scripted political ads as news). Press outlets like that know not to ask questions just wave the police and salute the flag while trooping up some support.

With Sgt. Dean Worthington in the custody of the FBI there was no dedicated officer to provide media spin to the compliant right wing news outlets when the undercover vice officer Andrew Mitchell murdered Donna Dalton or when Columbus Police Detective Shana Keckley organized five other officers who together spent thousands on drinks and tips to make the obviously political arrest of adult film star and Trump accuser Stormy Daniels in an operation that leaked emails show she planned days in advance with her superiors.

Chief Kim Jacobs made the obvious move to “pause” all but the “most sensitive” operations of the Vice squad, like the ones involving child sex trafficker Sgt Terry McConnell. Because the Vice squad is integrated with the intelligence unit, which handles spying on protestors, gangs and labor unions the choice was obvious. Former internal affairs and intelligence Sgt Chantay Boxill will take the microphone. This appointment shows that the investigation will go nowhere and it shows how it will get there.

The new mouthpeice works with both the unit that is being investigated and the unit doing the investigation. This alone constitutes investigating yourself and telling the public that you found nothing or made some adjustments in a policy. This is compounded by ability to invoke every Ohio police department's favorite defense against any public scrutiny: “Ongoing investigation.” Some of the public might think that Robert Mueller moves slow, but he is the biting arctic wind racing over the glacier that is Columbus Internal Affairs. Their favorite tactic is to keep investigations open for seven years until the very end of the statutory records retention period and then close the case and destroy the records 30 seconds later. 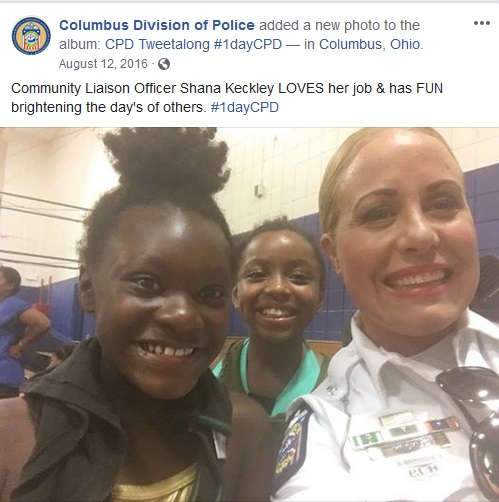 While this is all going on at it's usual glacial pace, Sgt Boxhill will be copsplaining the other social media fails of this summer. The same social media campaign that shows Sgt Motorboat with the kids also displayed this simply adorable puppy selfie from the K-9 unit: 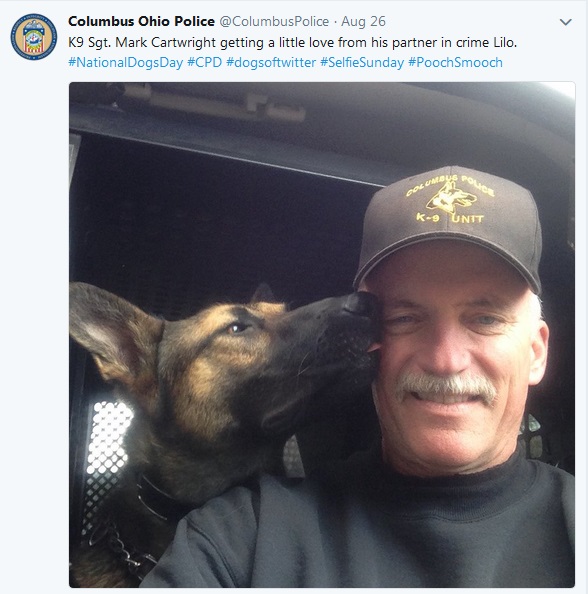 The only problem is that the pictured Sgt. Mark Cartwright was copslaining how one of his underlings, officer Brian Carter, was “forced” to shoot his own dog for attacking him just five days later. Benzi, the executed pig dog, attacked Carter during training. Sgt Worthington was in jail for child pornography, Sgt McConnell was paying children for sex, Detective Keckley was “investigating” strippers, Detective Mitchell was on paid leave after shooting an alleged prostitute and Sgt Boxhill had not yet been appointed so Sgt Cartwright the dog smoocher had to copsplain.

The Nationwide police PR machine maintains websites that track officer deaths, so that the public knows that sometimes a bad thing happens on the way to the strip club or to pick up child prostitutes. Often times police dogs are listed as killed in the line of duty when they died of heat exhaustion in their handlers cars and then the totals are misleadingly portrayed as officer killed while going after dangerous criminals. Benzi will likely be added to the list to bump up the numbers, alongside a Missouri cop who died of a heart attack behind the wheel of his cruiser in a donut shop parking lot in 2014.

Time will tell if Sgt Boxhill will be able to produce the necessary puppy pictures to make the public forget that real investigations have documentation, time lines and produce results. Judging by her background she does not like the public seeing documentation, time lines or results. Chief Jacobs needs to up the copslaining game and hopes Sgt Boxhill can hold up the rug while she works the broom.