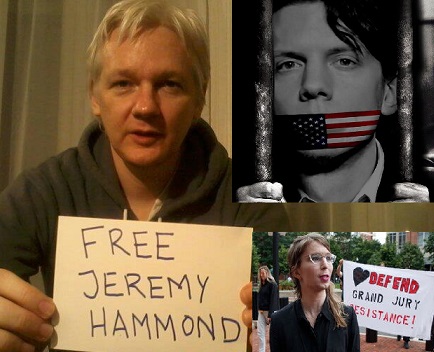 I've never made it a secret that Jeremy Hammond is a friend of mine and one that I am proud to have. He has been in prison since his arrest in March of 2012 for hacking the emails of a security firm known as Strategic Forecasting (Stratfor). The hack on Stratfor, which bills itself as a “private CIA," exposed that they was spying on ecological and corporate justice activists and marketing it's intelligence to major corporations and government agencies for a subscription fee that often ran to $40,000 and counted the husband of the Federal Judge in his case, Laura Preska, as a client. Despite the obvious conflict of interest Preska sentenced Hammond to the maximum term, 10 years, under the plea agreement. That time has now been extended.

Hammond was transferred Thursday out of his cell in Memphis where he was participating in a program that would have gotten him early release in December of 2019. This transfer, running through the Bureau of Prisons transfer facility on Oklahoma, will place him in Alexandria Virginia today or tomorrow to testify in front of the grand jury empaneled to indict Julian Assange for allged collusion to with the Trump Campaign and Russia during the 2016 election.

Jeremy will refuse to testify. He has not said this directly but he is well known to be outspoken about any cooperation with law enforcement. Refusing to testify in front of a grand jury will cause a person to be held in contempt of court, which allows a person to be jailed until the grand jury is done sitting and that can be up to 18 months. A judge may, and likely will, cause this jail time to run consecutively to his current sentence and thus he would not be released until April of 2024 as this grand jury was has sat since March of this year.

Since Hammond had been in prison for four years by the time of Assange's alleged crimes, he has no relevant testimony to offer the jury. The prosecution knows this but has called him anyway in a cynical move to extend his sentence with additional solidarity confinement which has been called torture by the UN and every civilized nation on the planet. Chelsea Manning was jailed by the same judge and jury on March 8th despite her having absolutely nothing to do with the crimes at hand. She has been been given fines in addition to her imprisonment which as of today stand at $51,500 and go up by $1000 a day every day.

In short this is all merely additional punishment for activists and whistleblowers and has nothing to do with Russia. Although Julian Assange has been ordered extradited from the United Kingdom and is in custody (and also rotting in solitary) he has not been moved to the United States and is being held without adequate contact with his lawyers.

This prosecution is persecution by a national security establishment that has a mind of it's own. In the interest dealing with Russian interference, but not through a special prosecutor and not with Congressional oversight, three people are now jailed indefinitely without charges for an investigation that has nothing to do with the 2016 election and Donald Trump faces no possibility of impeachment from a Democratic House whose speaker Nancy Pelosi stubbornly scorns her own base by refusing to call a vote.

The Justice Department has issued no statement on it's actions against Hammond or on his transfer. Speculation by reporters at CNN has suggested that prosecutors are looking to expand the case against Assange to things unrelated to the 2016 election. Doing this would violate UK and EU extradition law. It is clear from Hammond's hack of the private intelligence firm HBGary's emails that the government had a sealed indictment against Assange as early as 2011 for his reporting on leaks.

According to Birgitta JonsDottir, an Assange supporter and former member of both the Icelandic and European Parliaments, “The Secretary of Foreign Affairs in the UK has signed on the extradition. So if they want to add on it, they would need to amend it and that surely would need a new signature. Also if the new charges include sentencing that might result in the death penalty it would automatically overturn it. The threat of extra charges in the US makes extradition more difficult.”

This is a move against a hacktivist working in the public interest is not about crime, it is just about punishment. Whatever the results of this grand jury might be, they would not result in charges until after Assange is moved, which could take months, or by violating the extradition treaties. However all bets are off if No-deal Brexit happens in the next month or two or the faltering government of Boris Johnson collapses next week or two.

None of this helps a man being called to testify about things he actually knows nothing about. But law no longer matters in the Anglosphere, only power remains.