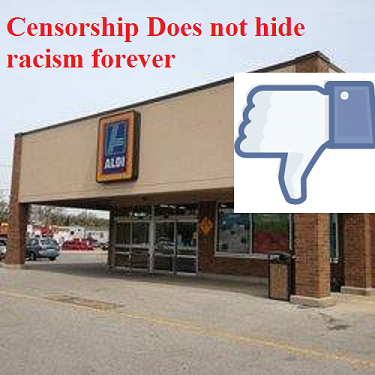 The white security guard, there to keep poor people from stealing food from a discount store, was  off duty Columbus Police Sergeant R. Bronson Constable (badge #5112).  He confronted the woman not for theft, but for her t-shirt. He berated her screaming that “Tamir Rice got what he deserved.” #TamirRice was a twelve year old boy killed by police in a two second drive up shooting in Cleveland for having a pellet gun in his waist band. The officers were not prosecuted.

The veteran Grove City officer has not been disciplined for screaming that an unarmed child deserved to be shot at shoppers in a discount store. He did this simply because a single shopper wore a shirt saying that unarmed civilians should not be killed by police.

It is possible that Facebook is not responsible for removing the post. The shooting of Philando Castile was recorded and Facebook live as it happened, then disappeared, then reappeared with a warning and an apology. On August 4th at themarysue.com, tech and culture writer Maddy Meyers reported that law enforcement has the ability to censor Facebook posts directly through their own access portal. They also used this to block access to Korryn Gaines’ efforts to film herself being murdered for unpaid traffic tickets by the Baltimore Police.

A mysterious disappearing post is much more understandable within the context of this level of law enforcement access to our daily lives. It is part and parcel of an overall effort to erase all evidence of police brutality and murder including “malfunctioning” body cameras and new technology that will block the ability of cellphones to film officers.

This incident of an off duty policeman harassing members of the public for the their Free Speech happened. The post was up for days. As it gained notice, it was removed. Comment on the incident has not been forthcoming from the Columbus Police Department, who have not returned phone calls, nor has Aldi made a statement. A complaint has been filed with both entities.

Bronson Constable has had his problems simply disappear before.  In 2014 Prosecutor Ron O'Brien declined to press theft of wages charges against him for billing $7200 for 21 days he was actually absent without leave, presumeably working a second job harrassing people.  Departmental sanctions apparently did not cost him his rank or position. It is if it had never happened and the public should pretend that the man watching them shop does not enjoy gloating over dead children or stealing from the taxpayers. So far as it is known, no police technology exists to erase actual human memory. I saw the story, the officer was named, so was the person who was harassed.

The Mockingbird maintains it's own site and uses social media as an amplifier exactly because of government and corporate censorship in our so-called free society. We maintain a robust site because of attempts by off-duty police to hack us and remove stories of rape by prison guards and other police abuse.

Law Enforcement should note that censorship causes a story to get bigger, and now this story is not going to just go away. As the movement against police abuse grows, so does police repression and the rate of police murder. The truth, however, will not go away with the touch of a button.