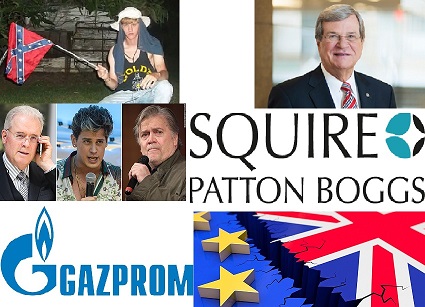 April 7th opened up with a raid of the home and offices of Trump attorney Michael Cohen. These raids were directed by the US Attorney for the Southern District of New York not special prosecutor Robert Muller. That makes this a separate investigation and it has nothing to do with Russia. If the raids did have something to do with Russian influence on American elections, they would barely touch Michael Cohen and at least one prominent Republican would be in the cross-hairs. The narrative would draw a directly line between the US Senate, Russian banks and white supremacists. It would also expose meddling in the Democratic process in the UK

Michael Cohen had not worked at the law office and lobbying firm of Squire Patton and Boggs very long when the FBI came knocking. That firm is a K Street lobbying powerhouse that is expensive to buy. They have at least two clients relevant to Muller's investigation. Those clients are the data firm Cambridge Analytica and the sanctioned Russia bank Gazprom. The former is under investigation in both the UK and the US for intervening in elections and the latter tried to lobby it's way out of sanctions under the Obama administration.

In order to help Gazprom, Squire Patton and Boggs hired former Senate Majority Leader Trent Lott. Lott, who was hired specifically for the task of the Russian bank, had a history of direct financial support to white supremacists in the 1990s and 2000s when he was Senate Majority Leader. He did this by purchasing campaign ads in the publication of the Council of Conservative Citizens, who Dylan Roof cited as one of his inspirations after he was arrested for murdering nine people in the oldest black church in America. Lott, along with former Democratic Senator John Breaux were the key lobbyists on the account. Gazprom is both a bank and an energy company and the drop in energy prices caused by America's increasing embrace of fracking for natural gas over the last decade has negatively impacted the Russian economy in ways that some geopolitical analysts call deliberate.

Regardless of the long term projections of the petro-dollar vs the methane rubble, there is a directly line of cash between Dylan Roof and Vladimir Putin and it runs adjacent to Donald Trump but right through the heart of the Republican party via Trent Lott.

Meanwhile another of Squire Patton and Boggs clients, Cambridge Analytica, has been in the media after Facebook through them under the bus for data mining to target pro-Trump ads during the 2016 general election. On the other side of the Atlantic, Cambridge Analytica has been the subject of investigation for campaign finance fraud for laundering money during the Brexit referendum. As American political discourse can not see over water except to aim a missile at a school, the media might not make an obvious connection. Squire Patton and Boggs was acting the law firm defending the role Cambridge Analytica on Brexit.

As a law firm they have threatened to sue the Guardian for reporting on the connections between Trump and Breitbart backer billionaire Robert Mercer, Cambridge Analytica and the Brexit Campaign. Brietbart's connections to white supremacists are well known and the racist anti-immigrant overtone of the Brexit campaign are completely obvious. What is not obvious is how Squire Patton and Boggs has positioned itself to cash in on trade with the UK once it has left the EU.

Right before the raid Squire Patton and Boggs announced a new service for American companies wishing to do more retail business in the UK after Brexit. This initiative is being run out of their offices in DC not their UK offices in London and Manchester.

Squire Patton and Boggs offer similar legal services for the Chemical Industry and for “Business Immigration”, which means they are more than happy to help circumvent the immigration policies that they favor and probably had a hand in enabling to keep out refugees while allowing upper class people with upper class paychecks to sail around the Atlantic pond with impunity.

There is ample evidence of campaign finance fraud on two continents. The only part that seems to be of interest to the FBI, either under Muller or under the US Attorney for the Southern District of New York, is payoffs involving sex with Donald Trump. The thought of sex with Donald Trump is repulsive to most of the American people, but the payoffs are only a small part of the manipulation of the public. As Steve Bannon of Breitbart said “It's about money laundering.” He can safely say that because his direct financier, Robert Mercer, will never be implicated.