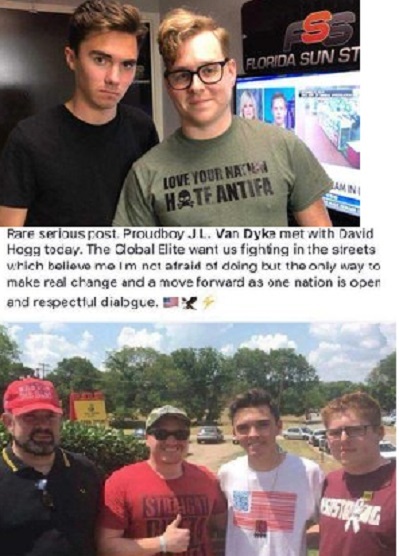 I saw a minor subject of one of my articles posing for a picture with a white supremacist who sued me and lost. That is never funny. David Hogg, a spokesperson for the Parkland survivors and therefore for gun control, was happy to be seen in a widely circulated twitter picture with Jason Lee Van Dyke, the embattled lawyer for the Proud Boys. They called this impromptu meeting where the Proud Boys were protesting the Parkland Survivors “productive dialogue.” Combining that picture with another picture of David Hogg mugging with a racist wearing a “Love your Nation – Hate Antifa” T-shirt and a very interesting political intersection.

The Mockingbird has already reported on the big money behind the March for Our Lives campaign and the connections of Hogg's cohort Emma Gonzales' parents to the intelligence community. At the time, David Hogg's father's employment at the FBI was investigative noise compared to the millions Gonzales' father has made off of intelligence community contracts. However Hogg's father becomes more relevant when the son is seen in multiple pictures with neo-nazis.

Gun Control is racist people control. Any new gun control initiative will not disarm the racist right, but instead leave activists, union organizers, journalist and your average person at risk of extra-legal violence. I personally have been on the receiving end of death threats, I personally have had the bad guys come to my home and I personally know it was the police that helped them find me.

Jason Lee Van Dyke owns guns. He poses with them online. When there was talk of a counter-suit in his case against me he said that he was judgment proof, no money would be collected and his “house is protected by .50 BMG” For those people who don't know their guns .50 BMG means the caliber 50 Browning Machine Gun, used in the machine gun of the same name and in military grade sniper rifles. That's a backhanded threat to anyone living within a mile. Literally, those bullets can score one shot kills at a one mile range. Van Dyke lives in a residential neighborhood with lots much smaller than that. He is not defending his home with his indoor voice.

David Hogg's classmates were killed by a guy who carved swastikas into the gun he killed them with. David Hogg then is instantly at the head of a well funded movement that can have a national demonstration in DC faster than most groups can even get a permit. David Hogg later has a productive dialogue to “end fighting in the street” with white supremacists including one who sued a newspaper for calling him a Nazi. Right after that David Hogg posses with a guy who has the same fascist haircut as Richard Spencer while that guy is wearing a t-shirt calling for attacks on Anti-Fascists. He does this all while still in high school with the support of his FBI agent father.

All together this is peak liberalism. A young man who calls for disarming the public to reduce violence literally reaches across the aisle to violent men and posses with violent men who want to use violence for racial and political reasons. David Hogg is the neo-liberal poster child of Wiemar America.

The money behind him makes it so that Bloomberg himself just shook hands with a Nazi. The false moral equivalence of “on both sides” or “both sides are violent” didn’t even come into play here. This liberal just shook hands with the ideological cohorts of his friends murderers and took a stand against their opponents.

There is a class component at play here. A less privileged person who was not in the direct political employ of billionaires and the son of an FBI agent could not shake those hands. He would have been beat down. He also would not have thought to shake a Nazi’s hand.

This is the safety that the Democratic Party offers the public in the streets and at the ballot box in the age of Trump. I'll stick to my own because this antifascist knows that this war is one to the end and has no illusions about dialogue. Nobody ever talked their way out of a gas chamber. You can only shake hands with a concentration camp guard if you are standing on his side of the wire.