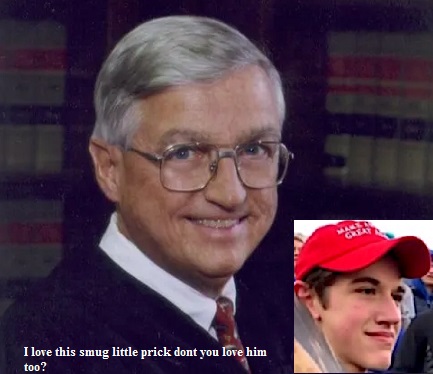 Sandman, the so-called MAGA-hat kid, was part of a group of high school students that got into multiple verbal and allegedly physical altercations last January in the nations capital with various groups protesting Donald Trump. Although they were on a school trip, their presence and matching hats seemed to have convenient timing and placement. The confrontation between Sandman and Phillips went viral, with the former's smug expression making him the Justin Bieber of proto-fascist self-assurance and privilege.

It is not clear if the Republican party machine sprang into action afterwords or they were locked and loaded and poised to pounce. Suddenly Sandman had a top notch Public Relations Firm called Runswitch. RunSwitch is basically a surrogate campaign office for Senate Majority Leader Mitch McConnell.

After the pulp mill had run out of trees to murder on the issue, a second round of attacks began, this time focused on bringing the media in line with the hard right narrative. CNN, The Washington Post and 50 other reporters and news outlets were sued. The libel action was designed to chill any discussion about the actions of Covington Catholic High Schools altar brownshirts. A celebrity grade libel lawyer was engaged and the discovery motions were designed not go get information, but interfere with the operations of the news organization involved. Both the law firm and the PR firm are priced well beyond the pay grade of almost any American family, even one such as the Sandman klan which includes a regional bank vice president.

Although the initial suit was dismissed in July, it was reinstated in October and the conflicts of interest suddenly became very apparent. The case appears in the court of senior federal judge William Odis Bertelsman. Bertelsman got his bachelors from the Catholic Xavier University in Cincinnati. He currently resides in Kentucky where both he and his late father Odis William Bertelsman, were prominent Republicans. He also teaches at the Salmon P. Chase College of Law of Northern Kentucky University. Mitch McConnell is a frequent speaker there. Close Mitch McConnell advisor Scott Jennings, who is both a leader of the RunSwitch PR firm and a paid CNN commentator, graduated from the same school. Thus the judge, an employee of the defendant, an employee of the plaintiff and an advisor to the Senate Majority leader are all linked to a single institution and have differing interests in the outcome. Add in a plaintiff backed by the Archdiocese of the Jesuit educated conservative judge and you have a court that is more ecclesiastical than civil.

This not “apparent” but very real and measurable conflict of interest should have had the judge run from the case at first glance. Instead he basically sent it back to the plaintiffs to provide the barest cover for what is a naked political prosecution of the press. Scott Jennings is being paid twice. Once by the Sandman family to advance the case and another time on CNN to advance the case.

Thus CNN surrendered to a PR firm whose employee they also employ for an undisclosed amount in order to elevate the voice of a rising young fascist and slam a jackboot on the face of a Native Elder. This is how one punches down with a jackhammer.

CNN is not stranger to influence peddling. Just as they are happy to be sued by their own employees in the Republican Party who are also PR flacks, they have allowed PR flacks from the right wing of the Democratic Party to clear stories with the Clinton campaign before even submitting said stories to their editors during Clinton's disastrous flop of a presidential bid in 2016. Of course these stories were anti-Sanders hit pieces of the kind we are seeing this week in the national so-called news.

With CNN settling out of the suit separately, the Washington Post and NBCUniversal remain in court each in a separate suit, also in front of Mitch McConnell's hand picked judge. It remains to be seen how quick each of them will abandon the truth, abandon the defense of Native people and surrender to some vague accusations made by right wing bigots about Nathan Phillip's state of mind. The future does not look hopeful for these titans who would and should be guardians of the fourth estate and the public's right to a truthful open society.