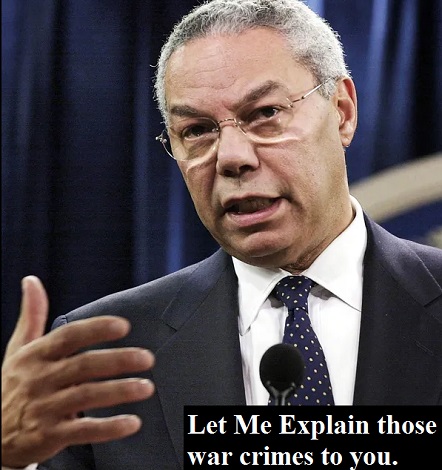 Powell began his war criminal career long before he knowingly and openly lied to the United Nations in order to start a war that killed and displaced millions of Iraqis as the Secretary of State. Although this was the capstone of his life long efforts to put a dignified face on the horrors of American imperialism, it was not his first or even best effort, simply his most well known.

His war criminal career, like that of so many other current luminaries of American government, began in Vietnam. Like the one armed napalm bandit John McCain, he began there processing and executing orders that should be refused.

Initially the wholesale murder of 504 Vietnamese civilians, ranging in age from 1 to 82, at the hamlet of Mai Lai was unreported. When a letter written by a witness finally reached a general an investigation was ordered and the orders fell to Colin Powell. Powell cherry picked the very best soldiers to interview, and never contacted or ordered the interview of the initial letter's author, Specialist 4th Class Tom Glen. "In direct refutation of this [Glen's] portrayal," Powell concluded, "is the fact that relations between Americal soldiers and the Vietnamese people are excellent."

Powell's ability to wash anything clean with a coat of white paint continued further into his career where he was tasked in 1974 with suppressing so-called black militants within the army while stationed in Korea.

His rise continued and by the Reagan years he was a Brigadier General serving as Deputy National Security Advisor. In that role he was the direct supervisor of Lt. Colonel Oliver North during the Iran Contra affair and it is impossible for North to have acted without Powell's knowledge and direct instructions.

His war crimes service continued as Chairman of the Joint Chiefs of Staff in 1989. In that role, he oversaw the planning and execution of the invasion of Panama, which killed over 3,000 Panamanian civilians and left over 20,000 homeless.

On his way to justifying the Second Iraq war, he oversaw the first as Chair of the Joint Chiefs. He brought his well honed cover-up skills to bare in shielding “Highway of Death” General Mcaffrey from any culpability in ordering surrendering and fleeing Iraqi troops to be shot in the back or bulldozed into their trenches while still alive.

All this lead to his crowning achievement of using a report that he knew to be plagarized and full of lies to form the basis of his famed UN Speech in which he got half the world to go along with the murder millions of Iraqis and the looting of the country for oil.

He later penned a book with his last drops of white paint called “My American Journey” to put a clean patriotic face on his own existance and serve as an inspiration to an up and coming generation of young would be American war criminals well into the 21st century.