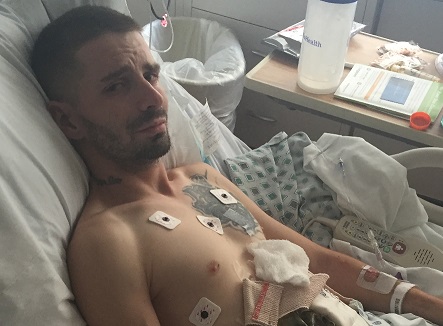 Jamison Edgerley is in Grant Hospital on the seventh floor. He has had multiple surgeries in the last week. Most of his large intestine has been removed. Police bullets have also shattered his hand, utterly destroying bone and nerves. He may loose complete use of it. He is there because of a volley of police gunfire that struck him through a privacy fence on the night of July 4.

He has been held under constant guard without a phone call, contact with or official notification of his family. He has been constantly berated by police, repeatedly interrogated by detectives while drugged and recovering from surgery. He has not been permitted to speak with his Attorney. He is not listed as being in custody, nor listed as a patient in the hospital. His charges are not clear nor has he been informed of them.

His Attorney, Sean Walton, had to both hunt for and sneak to him. Police would not confirm his incarceration nor would they confirm his location. Walton located him on the seventh floor of Grant through investigative work and was intercepted on the way to him by the same hospital security guards that denied he was a patient less than an hour earlier. They had been watching him on video.

Walton was taken back downstairs, searched, had his bar card and drivers license examined, business card copied, taken upstairs, search again then then granted a mere 30 minutes with his client. Police, through hospital security, claimed that this was policy. Such a policy is at odds with every legal definition of attorney-client privilege known to every jurisdiction that practices every known variant of English Common law.

Edgerley expressed fear of the police during his brief, monitored contact with Walton. His guards have been constantly mocking him, taking smoke breaks in his bathroom and openly laughing when his pain medication wears off. At least once, while he was doubled over in pain, the officer guarding him drew his weapon and accused him of having a gun. Edger was naked except for a hospital gown and had been under guard without contact since he was shot. This fits every known definition of a mock execution under the Geneva Convention.

Police policy allegedly permits family visitation when arranged with and through the department, yet prevents police from informing families of this policy. Thus the Columbus police are holding people under a set of rules that they made up themselves and feel no requirement to disclose. This is a violation of Human Rights known as arbitrary detention.

Edgerley has been interrogated at length at least two times that our sources within the criminal justice system can confirm. He was not given access to an Attorney either time despite demanding one. He was given no phone call. He has been held in secret without formal charges for over a week. Grant Hospital is complicit in this by not having him on the books despite staff clearly knowing where he is and leaking that information to the outside.

The level of secrecy applied by the Columbus Police and Grant Hospital is on the level that at of Camp Delta at Guantanamo Bay. Only extraordinary rendition to a CIA black site has more official secrecy than this, and only such a place has a harsher level of torture. Formally Edgerley is being held on an outstanding warrant for receiving stolen property, yet he himself has not been informed of any charge.

The incident which lead to his near death and continuous misery began with police responding to reports of a dispute at the address where he was shot. Five bullets were fired through a privacy fence at Edgerley. The police could not see him, but claimed they heard gunfire. It was 2:30 in the morning on July 4. No gun was found at the scene.

Edgerley is 5'5” and weighs 123 pounds. He could easily have been a child. The bullets passed through the fence but did not pass through the fence on the far side of the yard. Thus police fired on an unidentified and unseen figure that could have been a child in a downward trajectory. Had he been much shorter he would have been struck in the liver and or lung and been killed. Multiple officers responded to the dispute and could have easily subdued a man of his stature with their vast amount of equipment and rigorous training. Instead they chose to shoot at a figure they could not even see.

All of Edgerley's treatment subsequent to his survival of the hail of gunfire seems to be focused on exonerating the police of any wrongdoing. He is still being held under circumstances where the police permit his lawyer to see him only with a previously approved appointment for an amount of time of their arbitrary selection. Grant is no longer a hospital. The Columbus Police have turned it into their own secret prison.