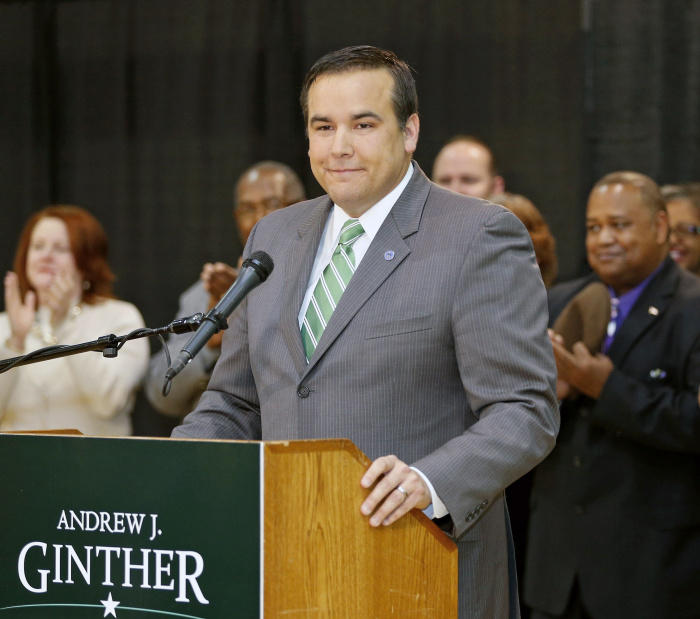 The Metropolitan Club is where dignitaries dine, discuss and determine the next dysfunctional downtown errection. Despondent that he was underdone dissing the dogged defenders of black life in Columbus, Mayor Andrew “The bagman” Ginther raised his middle finger at the city and the truth higher than the Tax-Free edifice that is the Nationwide Arena, Office Complex and yuppie watering hole. His smug mug pictured above is the result of weeks of training to have a more disgusting grin the Council President Kline.

During his remarks to the glitterati at the expensive gathering, Ginther stated that “There is no evidence to support that there is a pervasive problem within the Columbus Divsion of Police.” You can here him on the video above and you can see as much evidence as he has lies about it's non-existence of that evidence at the same time.

This Mayor made a number of other claims that are in technical terms complete bullshit. “At the same time we know that it has never been more dangerous to a law enforcement officer in America.” Ginther must have a hamster in his pocket because I am not included in the “we” who “know.” What I know, because unlike the average cop I am literate, is how to read basic FBI statistics. Even if you factor in dogs dying of heat exhaustion on the border sniffing for drugs, which the police do, America is in a historic low trend not seen since the late 1950s. Literally to the police and the Blue Dog Democrat Mayor, Blue Dog lives mean more than black lives in Columbus, to the FBI and to police around the nation.

While the audio was playing, I edited out the “few bad apples” tangent that shows up any time a politician addresses policing in America. While it played, it was more than played out. Look at the video yourself, count the apples. That is more than “a few.” The Mockingbird's readers, unlike Ginther and most three year olds, can count past the number five.

He also mumbled something about public trust. Saying anything other than what he did say would acknowldge that the public's trust in police has never been lower.

The purpose of Ginther's appearance, and his vapid gumflapping, was to signal to the banking and real estate interests that pay him to run the city on our backs is that the police will be supported in what they do, there will be no policy change, and black people will continue to be displaced and murdered at the rate the real estate lobby demands.

If one combines Ginther's speach, with the county prosecutor's prison labor luncheons and a meeting with Jeff Sessions at the Columbus Police academy the signaling is clear. Jeff Sessions is a neo-confederate and is happy to make common cause with the same kinds of fascists running Columbus's streets now. Ginther is a national player in the Democratic Party. Police Chief Kim Jacobs was part of the Obama administration's “reform” task force. Ginther wants to the racists downtown and inside the beltway to know that he is reliably their guy to keep the money flowing and the people on their knees, just like Ms Super predator Hillary Clinton.

Out of all major cities, Columbus is number one in only a single thing which is murdering black men. Ginther needs to market Columbus as a growing place, a place to invest, a place to move your business or even bring the next Democratic National Convention. Since we are the best at only one thing, he needs to assure the people that pay him that 2018 will be as good a year on the scoreboard as 2017.

The Mockingbird will continue to mock this sad parody of a man, continue to investigate the police and continue to give a voice to those who fight back.