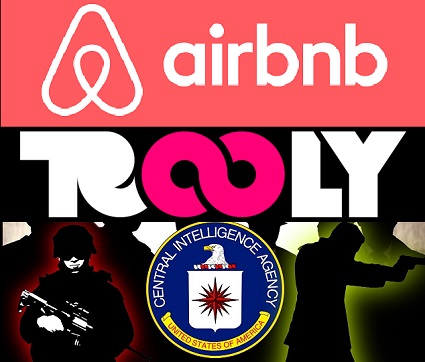 Watch what you say online. Always say pro-social things. Say normal things. Act like you came here from the 1950s. Do not support sex workers or be a sex worker. Remember that we are watching you. Obey, or you will sleep in the cold. All of those commands and the punishment sound like lines to be said by a b-movie villain. They are not. They are the corporate policy of America's #1 not landlord landlord, AirBnB.

AirBnB has pattented technology that scans you social media posts and uses Artificial Intelligence to build a profile on you. If it thinks you are somehow “involved in pornography” or have “authored content with negative language.” it will ban you from renting. Nobody knows what “negative language” means outside of AirBnB. All of the data, and the rules, are kept in “a secure third party database”. AirBnb does not say who the third party is.

The so-called third party could be a shell game. AirBnb recently purchased a start up called Trooly. They began in 2015 as an AI startup hoping to break into the growing field. They got $10 million in funding from Mitt Romney associated Bain and Company in 2016. In 2017 AirBnB purchased their intellectual property and scooped up an undisclosed number of engineering employees. Press sources called this buying “ intellectual property and scooped and engineering employees.” Slavery, at least outside of the prison and wilderness firefighting industries, is technically illegal in California but Silicon Valley does like market entry and disruption.

Said engineering team is centered around Anish Das Sarma and who are now listing their titles as Engineering Manager and Head of Trust at AirBnb. Prior to Trooly and during his tenure there Anish Das Sarma was also part of Google's AI team working on Project Maven, which the defense department uses to intelligently kill school busses full of children with drones. Nilesh Dalvi was a research scientist for Yahoo and later Facebbook prior to AirBnb and Trooly. Nilesh Dalvi has a number of patents that cite Palantir owned patents.

Palantir is a CIA funded big data aggregation firm and surveillance firm. It is head by Peter Thiel. Thiel also has an early investement interest in Facebook and an early investment interest in AirBnB. There is a now a direct line for the data AirBnB is harvesting without your consent in order to judge you by secret rules and the CIA that is documented by a copious paper trail of patents. This is where we circle back to the unnamed third party with the allegedly secure database that was mentioned earlier in the article. Out of all the companies mentioned, Palantir is the most likely candidate and they would not exist without the CIA's money.

Thiel is not the only source of CIA associated investment in AirBnB. Reid Hoffman, who like Thiel was an early PayPal investor, represents Greylock Capital Partners on AirBnB's board. Greylock's founder and former chairman Howard Cox also sat on the board of the CIA's venture capital arm In-Q-Tel. That is another direct line to the CIA that includes every word you have ever said online after being weighted and judged by Trump supporting and Jeff Epstein associated Peter Thiel's purchased employees who got their start targeting missiles on clinics.

AirBnB has used it's vast influence in the past to intervene in local elections to secure a city government in San Francisco that is sympathetic to their systematic driving up of rental prices. They were not able to use data to better spend their money then, but the change was beginning. As that was happening, Thiels employees at Palantir began working with Cambridge Analytica to use similar software to influence the upcoming 2016 elections.

Facebook and Google, along with Twitter, were proven in this publication to be engaged in surveillance that was crosss device and cross platform for the micro-targeting of advertising. This is based on some of the exact same technologies used Trooly. As the patent trail shows there was overlap in the tech teams. This data is in the hands of the same people that openly admitted to invervening in one local election and are involved in the national scandal that was the 2016 general election and are uniformly on the side accused of cheating.

AirBnB has tested the waters by banning porn actresses from renting, even under their own names when on actual vacation. This is a test targeting of the most socially vunerable so that they can never be asked why they spent so much of Mitt Romney's money to build it and even more of the CIA's money to buy it. It can be used any time to deny you a small get away rental. Sounds like not much to those of us who never get away for a weekend, but that data, and the judging of that data are products for re-sale as well. Both Corporations and the Government are actually very interested in your opinion and what you do with your life. They are not there to listen to your opinion, just to use it to judge and control your life.