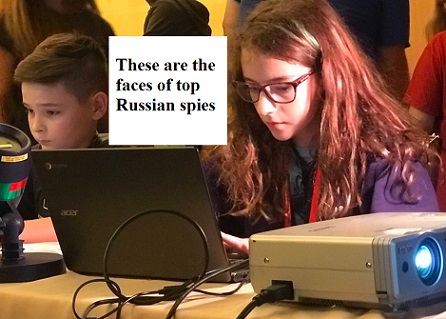 Voting machines are not secure. This author has been reporting that simple fact for nearly 6 years. The security on voter registration systems or more correctly the vulnerability thereof, has also been the topic of multiple articles over the years. I once speculated to an ex-girlfriend that I could teach her 10 year old how to crack a voting machine in under one hour. Said 10 year old mastered the method of breaking a single alphabetic substitution cipher in under an hour and wandered off bored. The kid in question had no particular talent and very little interest. Then somebody went and proved me right in public.

At this year's DEFCON, one of the world's premier hacking conventions, security expert and University of Pennsylvania professor Matt Blaze organized a competition to hack voting machines and replica secretary of state websites. There were two pallets voting machines and the websites were actually strengthened. Thousands of people participated. An 11 year old girl penetrated the security of Florida's election system in 15 minutes. She chose not to be named. Emmett Brewer, the 11 year old boy, pictured above sitting next to her, took three times as long but still altered the same results in under an hour.

The response to this now scientific proof by government officials actually involved in counting votes has been cosmetic at best. The National Association of Secretaries of State, an organization that brings the top election tampering government officials together, responded in a statement “It would be extremely difficult to replicate these systems since many states utilize unique networks and custom-built databases with new and updated security protocols,”

Having covered the “unique network” and “custom-built databases” used in Ohio, this reporter is not impressed with that statement. I have demonstrated the vulnerability of the current system as it passed the Ohio Board of Voting Machine Examiners. The failure of the voter registration database in Ohio to even accurately carry out it's designed function was the topic of an article I wrote during Obama's first term.

With these facts in hand, we can now examine the claims of the intelligence community and the Democratic Party leadership. “Russian election hacking” is the term that has been thrown around. This has become catch-all for everything that Russia has done. This includes their unproven and unlikely hack of various Democratic Party machines, their not very massive or effective social media offensive and some alleged attempts to spearphish the email addresses of voting machine manufacturers employees and county level election officials. None of these things is actual penetration of actual election equipment.

Russia is a country with a history of great intelligence work. They have massive resources in cybersecurity and their own software industry. They have more resources than the average junior high school, which is all that is needed to directly alter the results of a national election in the United States. If Russia resolved to alter the actual vote totals of the 2016 election they could have done so. They are accused of attempting to use the most difficult and roundabout route to that goal without evidence that they even succeeded. The only places where this is actual vote anomalies was Wisconsin, and the Democratic Party acted to keep those anomalies from being properly examined.

The actual absence of functioning machinery of elections is preserved through voter suppression, gerrymandering and physical control of the machines by the manufacturers and high partisan secretaries of state. With this clear demonstration of vulnerability there is no doubt left that if a vote total is questioned, the first person to answer for their actions should be the last person to have touched the equipment. Not one single drop of evidence has been presented for examination that any Russian intelligence agent had physical or remote access to any machine that counted votes.

Destroying a vote tally is one part of election fraud. The other is voter suppression. With voter suppression, it is the Republican Party that works to keep voters suppressed and the Democratic Party that fails uniformly to defend their own people's right to vote. Meanwhile, the technology is so week that I could literally and personally make Mickey Mouse president of the United States and so could my ex-girlfriend's teenage child. It is always easier to blame an unsympathetic tyrant like Putin than to look in the mirror and admit to yourself what you did or did not do.