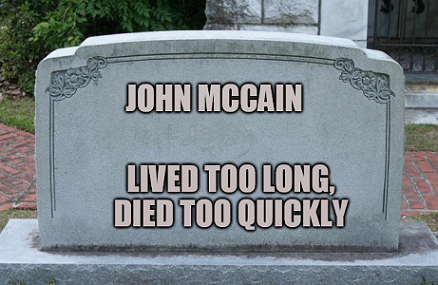 We should all have a moment of silence. We should reflect on the most important day in the life of now former Senator John McCain. Fifty Years and ten months ago to the day, October 26th 1967, John McCain was shot down while part of a 24 plane bombing run on downtown Hanoi. The raid was no successful, with three aircraft lost including McCain’s. The power plant that was the ostensible target of the raid was not hit but many of the aircraft managed to use their advanced targeting systems to get their bombs fair close, striking the surrounding residential neighborhoods and killing thousands. Let us bow our heads to remember the children that evaporated in a cloud of napalm that morning in school. They would be parents and grandparents now.

His subsequent time as a prisoner strengthened his already inbred and cultivated racial hatred. "I hate the g****...I will hate them as long as I live." His father had been the executive officer of the USS St Paul in the early stage of the Korean was when the ship was engaged in a number of indiscriminate shore bombardments of North Korea to attack supply lines.

As the great-grandson of a Confederate Cavalryman and slaveholder, John McCain could be counted on to stand with the Faith of his Fathers. After succeeding to the Senate seat of Arch Conservative and opponent of the 1964 Civil Rights Act Barry Goldwater, McCain steadfastly voted to oppose making Martin Luther King Jr day a national holiday.

His initial political career was financed by his wife, heiress Cindy Hensely. Her father and uncles had bolstered the proceeds of their beer distribution company and race track through war-time bootlegging and a post-war association with various bookmakers. The couple were married after his long stint of dating topless dancers and models in his various ports of call as a sailor, the years of captivity the resultant well-deserved health problems having dampened his appeal as a pilot and playboy. His loving wife, after a life of managing her father's organized crime fortune is a leading candidate to take his seat by appointment of the Governor until a special election in 2020.

He never failed the Faith of His Fathers by confining his bigotry only to race. He was strident opponent of gay rights and gay marriage throughout his legislative career.

Although he spent years being tortured as a prisoner of war, and speaking publicly against torture, McCain cast votes in favor of the CIA but not the military using torture on “enemy combatants” who had the same legal status in the undeclared Global War on Terror as he did when shot down over Vietnam. The attack he was shot down on took more lives than 9-11.

He only took meaningful action against torture during his brief stint on his deathbed. His servants delivered his dissenting vote on the nomination of Gina Haspel as CIA director because of her direct involvement in torture.

McCain is survived by four children, including naval officer JS McCain the third and Fox “News” Commentator and Xanax addict Meghan McCain. A solemn nation can only contemplate the sins of his fathers alongside their faith on this Sunday morning while former Senator McCain finds out if hell is as hot as the napalm he dropped on children all those years ago.