Trump orders military to the border to halt unsanctioned migration. How would that work? 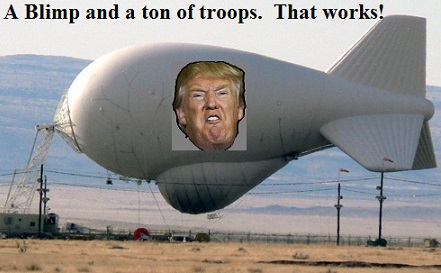 Yesterday, April 3rd, The president tweeted about a new, controversial and possibly unconstitutional plan. There was also an avalanche of stories about teenagers snorting condoms. Both are tales of immature minds doing dangerous things as both can be expected to try to do. One of is worthy of logistical examination because it effects innocent people and the other is the hand of the mighty god Darwin in action.

The President, ever mindful of his need to play up his base, switched gears from attacking the post office to combining the love of all things military with the irrational fear and hatred of brown people. One does not send the military to arrest. The functions will be deter, arrest and kill with great effectiveness. However the question about this seek and destroy mission is how much seek, how much destroy and where will it come from?

Since Cadet Bone Spurs never actually was in the military he needs someone to do his staff work for him. I'll step up and spend a couple of hours worth of research and thought exercise on the problem. The problem and the mission is to stop people from crossing a line 1954 miles long in groups between 2 and 20 with or without arms and with or without vehicles. If they are caught they can either be taken back, taken to jail and then taken back, or killed. If they die in the process of crossing the desert, their bodies must be removed, accounted for and either cremated, buried or shipped to another country that is not in the mood for our murderous antics. This is a huge logistical problem.

The first problem is watching the whole border constantly and efficiently. Satellites are too expensive to both have in either sufficient density in a geosynchronous orbit with the camera resolution to see 23,000 miles or in sufficient number in low earth circumpolar orbit to cover the same area at all times. Aircraft and drones would require fuel, maintenance and would be needed in a great number because they do not sit still. On the other end of the spectrum, a human equipped with the mark 1 eyeball sensor package does not have the sensor range of other systems and would require a huge density.

The best off the shelf solution would be tethered balloons operating the Kestrel camera system. This surveillance technology is already in use by the military, the intelligence community and Google, and is actively being marketed to border guard organizations at home and abroad. The 100 square kilometer range would require one to be placed roughly every 4 miles along the border in order to give a surveillance depth inside Mexico, zone surveillance overlap, and zone surveillance depth. This would required 410 of these systems.

Each of the systems is deployed from a trailer, and would need two operators, a second truck and a generator. It would form the basis of a camp. The trucks would need drivers. Since it is guarding an 8 mile wide zone, it would need it's own troops. It would get a fire team of 4 soldiers and a Humvee. This totals out to 2 technicians, 2 truck drivers, and for soldiers. Every other camp would get a Sergeant to command the soldiers from two camps and round out the squad as is the US Army standard.

One Humvee is not sufficient to both intercept and transport unauthorized border crossers, be they dead or alive, nor to secure them during transit to where they are going. Thus the third squad in any platoon needs to be held back, given 2 extra Humvees for transport of both prisoners and supplies, and the platoon commander needs their own vehicle.

This works out to one US Army platoon and 7 Humvees along with 2 trucks, eight technicians and drivers for every 16 miles of border. The cheapest off the shelf solution is starting to spend real money now.

Infantry soldiers along with the truck drivers and technicians (be they actual military or civilian contractors) need to be rotated in and out. They need food, fuel, batteries, medicine, tires, motor oil, vehicle parts, clean water and a host of other consumables. These will have to come in additional vehicles with off-road capabilities so as to never remove operating soldiers and their equipment from duty. That means more trucks. These can be provided by higher unit's organic support structures.

Those higher unit support structures exist at the battalion level. Standard organization for the US Army is 12 platoons per infantry battalion. This will require a base for all those troops to be at a little further back and likely in the middle of the 192 mile stretch of border they would cover. That means another base that would serve as the hub of activity for the area. Troops not normally in the infantry role would likely rotate into front line guard duty, or serve as guards for the adjoining allegedly temporary prison camp each 192 mile stretch will invariably spawn. These personnel will be pulled from the heavy weapons platoons, the company and battalion mortar platoons and other places as needed. The scout platoon and sniper section would likely rotate around the zone. The signals, medical, supply, transport and headquarters units all would have plenty of tasks to constantly occupy them.

Completely disregarding the urge to include army aviation assets, and basing the force structure entirely around the modular light infantry battalion table of organization and equipment from 2014, this force structure requires 10 light infantry battalions to cover the border. Any subtraction from this would not give the coverage the draft dodger in chief has in his tiny little mind.

The plan works out to 11,000 soldiers and 800 technicians covering the border in 10 zones. This would absolutely gut the ability of the Army to deploy maneuver ready units to other places where we are committed to killing people in order to keep them in line, including Syria, Iraq, Afghanistan, and Africa. All of these places require the same types of units optimized for the same types of missions.

Although this number represents only 2% of the army as a whole, it represents 7% of the maneuver battalions and an even greater percent of the light infantry strength. It would be unwise to substitute in other units that are capable in the light infantry role, as this would involve the gutting or the use of special operations troops that have other capabilities and are either committed elsewhere or needed to be available on a moment’s notice.

The President may have seen this and intended to use the National Guard instead, perhaps at least as a stop-gap. He could get the needed troops from Texas (4 battalions), Arizona (2 battalions) and New Mexico (2 battalion equivilants counting military police units). That would leave only a 2 battalion gap in the force structure which could be filled from California with Stryker type units, although this would increase the amount of fuel and maintaince required. This stop gap would remove 11,000 people from the work force, including many police, and is not sustainable as Nation Guard enlistments assume part time soldiers who would not be deployed for years on end. It is not clear if the monetary cost will be borne by the federal governent or by the states. Clearly Mexico is not going to pay for it.

The United States does not have the troops to spare without either re-structuring the Army to be in line with this new presidential idea or a size expansion. Additionally, the Kestrel surveillance system is mounted to balloons manufactured by only one company in South Dakota that may not have the production capacity to produce 410 balloons in time for the President's next military parade.

In short, a minimal implementation of the President's latest bigly idea is as realistic as anything else in his twitter feed, which is to say not at all. The morality of the president's plan was not discussed as the president has no morality and brings nothing to the table for any discussion.