Taking Every Cent in the School to Prison Pipeline: How Securus Technologies Loots Kentucky to Finance Racist Indoctrination of Children. 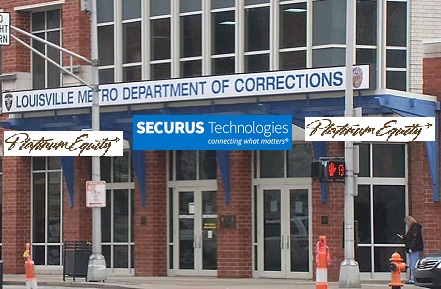 Thus one company will lie about slavery, use modern day prisoners as slave labor, charge families hundreds per month to speak to their loved ones and reap tremendous profits. All the while they pay off cops and politicians to keep the engine of repression oiled. On July 14th and 15th investigative journalist Jared Bennett released two stories on WFPL. The latter story coincided with a major corporate acquisition connected to his investigation that one can not fault him for missing. His topic, profiteering from the families of prisoners, and his target Securus Technologies, are familiar to long time readers of the Mockingbird. While researching in order to follow up on and extend his stories we encountered a web of exploitation of prisoners families in Louisville and other parts of Kentucky that has in part financed a series of recent corporate maneuvers that will tighten Securus Technologies parent company's grip on the wallets of the families of incarcerated people.

The basic reveal was that the COVID pandemic has stopped visitations to prisoners which in turn increased phone calls and video calls to and from prisons and jails. This has increased revenue to the state, which gets a kickback from the profits of the private companies providing the communications infrastructure. Kentucky State, County and Local Governments, including the consistently overcrowded Louisville Metro Jail System, made $12.8 million from the families of incarcerated people in 2020 on phone calls alone.

These companies also pay local and county governments signing bonuses for access to their human revenue streams that have amounted to $900,000 in the last 10 years. These bonuses are used for such things as purchasing mats for prisoners to sleep on the floor. The contracts at the state level guarantee Securus a minimum of $3.2 million with an additional 40 to 50 percent of the profits for the use of tablets and video conferencing. With nearly 1200 prisoners held in Louisville Metro Jail each getting a single video conference ($5 for 20 minutes) and a single phone call ($10 to a cell phone) a week nets Securus $9000 weekly. Talking to your lawyer, or a bondsmen, or having a working family that takes more than one call to get in touch with will cost more.

Talking to your lawyer this way is not safe. Securus has been known to routinely violate attorney client privilege by recording calls for “security” purposes. The quality of the calls is low and dropped calls are common. If a call is dropped after 5 minutes, another $10 is required to restart it. Neither Securus nor the State have any incentive to make the infrastructure work, as the profit once by failing to repair it and profit again by people paying to overcome their neglect.

While covering prison issues in Ohio, this reporter has received witness reports of numerous occasions when some listening party, either guards or a Securus employee, seem to have cut the call just a some human rights violation is being detailed or critical information relayed.

Since the Mockingbird began reporting on Securus, there has been a change of ownership. The former owner, Castle Harlan, sold it to a different huge private equity firm. The new owner since 2017, Platinum Equity, has made some big moves with the big profits they have reaped. While other sectors of the economy got slapped to the floor in 2020, Securus increased it's profit by 10% to $767 million.

Platinum Equity restructured the company in 2019 creating a corporate umbrella above it called Aventiv Technologies. In January of this year, Aventiv bought up Securus's nearest competitor, JPAY, inheriting their whole organization right down to their PR flack Jade Trombetta, who has handled prison profiteering public relations for the last seven years. This explains her generic non-answer to WFPL's request for an interview on their profiteering “Securus is proud to provide communications services to the Kentucky Department of Corrections. Our products keep incarcerated Kentuckians connected with their loved ones, help reduce recidivism, and promote public safety.”

this past October, while they were scooping up the competition on their way to a greater market share of prison misery, Aventiv found time to partner with another exploiter of prisoners for profit. They announced a strategic partnership with Televerde.

Televerde manages inbound call centers within prison walls, where they market the sub-minimum wage labor of women prisoners to third parties for both marketing and customer service. The company operates 10 such prison call centers globally, in places as diverse as Argentina and the UK. Out of those 10, 2 are in neighboring Indiana, including their newest just half an hour away in Madison. Meanwhile they collect corporate accolades for providing “job-training”

Obviously such an inbound phone call to a prison does not cost Securus any amount of money that would justify them billing $40 an hour for it. It should also be obvious that dropped calls are not going benefit this partnership to either the quality of the infrastructure is better and cheaper or Securus deliberately drops outbound calls. So what is the real cost of delivering voice communications to a fixed location? How much does the state profit from this prison labor? What is Securus's cut? When will they make their obvious move to a prison in Kentucky?

While Securus is making money on phone calls literally coming and going, their parent company spent $2.4 billion to close a deal on July 15th just as the second of WFPL's stories broke. Platinum Equity acquired McGraw-Hill Education, one of the largest publishers of textbooks in the nation. One third of that price was the 2020 profits from Securus alone. In 2015 McGraw-Hill, at the behest of the Texas Education Agency, published at geography textbook that referred to slaves as “workers.” The company appoligized and update the digital version after TIME magazine reported on it, but the damage was done, as printed versions will be in use for a long time with the current funding for education at current subterranean levels.or profit oiled and running.