Signs that the Fix is In: Murdering Vice Cop Andrew Mitchell to Settle on Civil Rights Charges 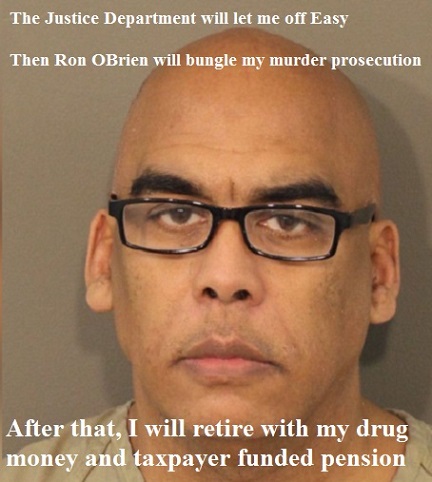 The involvement of the Department of Justice's Civil Rights Division in the affairs of the Columbus Police Department stretches back more than 20 years. Every instance to their intervention follows the same pattern. Local outrage leads to court cases which then lead to attorneys involved which then leads to the Justice Department stepping in. What follows next is a change in presidential administrations which leads to a change priorities, or in the case of the Trump administration outright removal of the pretense of priorities, which is then followed by half measures or consequences. The establishment uses time and slow process to stretch out the quest for justice on the rack and then break it on the wheel. New developments in the case of Andrew Mitchell follow this practice in microcosm.

There is no doubt that Andrew Mitchell is a killer. Investigations by this publication and the Columbus Free Press revealed his drug and real estate empire. There is no doubt that he kidnaps sex workers and extorts them. This ended once in the death of Donna Dalton. He was charged by the federal government with extorting sex from at least three other sex workers while supplementing his drug income with taxpayer funded wages only after it was clear that his killing of Dalton was premeditated murder. Now the federal government has agreed to talks on a settlement of the charges without trial.

The evidence is clear. But for some reason the federal government does not want to go to court. Court could be avoided by a simple guilty plea on Mitchell's part. The difference between the two is that the victim's voices will never be heard. Their testimony will be a police record which will be destroyed as opposed to a court record which will be preserved. The Justice Department could simply offer no deal, no negotiation, and a little mercy at sentencing and the details would be there for all to know. Instead they have chosen to silence the most vulnerable victims. The vulnerability is sex workers is why Mitchell chose them as his rape victims. Apparently the Department of Justice's Civil Rights Division cares more about the rights of an openly corrupt cop than the rights of working women both in and out of the sex trade.

The gravity of this move will cause the impact to roll downhill from the federal to the county level. Despite all the evidence and despite Mitchell's arrest by the federal government it took months of protests to badger Obrien into empaneling a grand jury in the Dalton case. A prosecutor can charge someone without a grand jury, although this is not often done, but OBrien walked slow and put it in the hands of others. Months more of protests forced Obrien to then use the grand jury properly and get the indictment. This move by the federal government will sabotage Obrien's subsequent prosecution of Mitchell.

With this move, the testimony of all of Mitchell's other rape victims will go away. It will give Obrien the excuse to not bring all the evidence and give Mitchell's police union funded defense team a viable strategy. Mitchell is the first Columbus Police officer actually charged with murder in over 20 years despite an epidemic of police shootings of children. He, along with each and every judge that are subservient to the Columbus Democratic Party machine and the Franklin County Republican political machine, is reliant on endorsements and campaign contributions from the Fraternal Order of Police to retain their offices.

At the same time that a flurry of investigations happened around Dalton's murder, other members of the Columbus Vice Squad were investigated around the high profile arrest of Stormy Daniels. The Vice Squad was disassembled. It later quietly rebuilt. Officers were relieved of that particular duty. In the end, what prompted Department of Justice scrutiny was their foolish choice to contact the White House about Daniel's arrest. Again, the Justice Department chose to protect power not people.

With that furor gone, and the cycle of abuse of the public restarted, the coast is clear to enter negotiations with Mitchell. These negotiations will drag on, and they will delay his murder trial. The hope of the local and national oligarchy is that public hindsight will be exhausted and Dalton's family will be increasingly isolated in their determination in their righteous desire for justice.

It has been months since there was a development in the case, and it has been nearly a year and a half since Mitchell took Dalton's life. Setback after evasion after set-back have been compounding and the truth retreats ever further from the public eye. This is business as always for both Columbus and the Department of Justice so-called civil rights division.