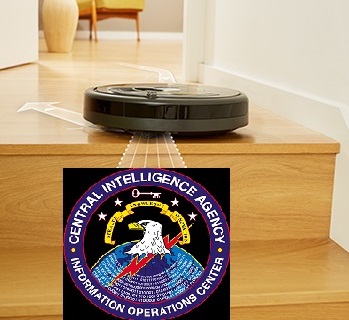 A Roomba is one of the cutest things the internet put a cat on. This article was delayed by an endless parade of cat playing with roomba videos, dog barking a roomba videos, and plain old cat videos because the author likes cats. Beneath the feline powered viral marketing campaign there is a hidden agenda and that agenda is as bad for you and your privacy as feeding a gremlin after dark or making bed from living tribbles.

As reported in some detail in Gizmodo, Roomba's creators at iRobot (the company not the Issac Asimov book) are happily turning an additional profit by selling Roomba user data to Amazon and others. They think this is great. When interviewed by this was the response

“There’s an entire ecosystem of things and services that the smart home can deliver once you have a rich map of the home that the user has allowed to be shared,” said [iRobot CEO Colin] Angle who told Reuters that iRobot, which made Roomba compatible with Amazon’s Alexa voice assistant in March, could reach a deal to sell its maps to one or more of the Big Three in the next couple of years.”

So now all the user data collected by a cellphone, bluetooth and wifi enabled robot can be sold to people who want to ram push advertising down your throat. As invasive as that may seem, the user opted into it at purchase by agreeing to the privacy (you have none) policy. As disgusting as that is, Wayfair may not be the only party examining the layout of your furniture. There are government surveillance implications, and they are staggering.

Selling data to Amazon is like giving it to the CIA. Amazon's cloud computing service was financed by a CIA contract. It was such a good contract for Amazon that IBM sued to win it back in federal court.

One might think that the CIA has no interest in the layout of your home, but they have already spent a great deal of money on trying to get that information through the direct financing of start ups, including Sketchup and Keyhole. The latter became Google Maps. The CIA is not even the only intelligence agency that has access to your housecleaning cat toy.

Under the USA Patriot Act, the NSA and other intelligence agencies have automatic access to any business records of US Persons and the NSA has had access to any “foreign” communications for decades. They game the latter part of that system by wholesale moving server farms worth of data overseas and then moving them back as part of the XKEYSCORE program revealed by Edward Snowden.

The business records portion, aka section 215 of the PATRIOT ACT, reads as follows:

“Subject to paragraph (3), the Director of the Federal Bureau of Investigation or a designee of the Director (whose rank shall be no lower than Assistant Special Agent in Charge) may make an application for an order requiring the production of any tangible things (including books, records, papers, documents, and other items) for an investigation to obtain foreign intelligence information not concerning a United States person or to protect against international terrorism or clandestine intelligence activities, provided that such investigation of a United States person is not conducted solely upon the basis of activities protected by the first amendment to the Constitution.”

I covered this in a recent article on bulk data collection from internet aware sex toys, whose makers were sued for selling user data to third parties unknown. Although that particular violation of privacy through the internet of bad dirty things is especially special, Roomba has it's merits.

When mapping your house, it knows where your children's toys are on the floor to within a millimeter every day. Someone wanting to walk through your house could have an augmented reality map to do it in the dark with VR goggles on and they wouldn't trip over a thing. They could come in while you sleep, quietly navigate your house without stepping on a thing, plant drugs and have you arrested in the morning.

This $800 high tech surveillance tool is not without it's weaknesses. It can be defeated with a $10 tool from your local corner store. That is known as a “broom”. Perhaps your parents taught you how to operate one. Your cats will thank you too.