Review of The Expanse, season one 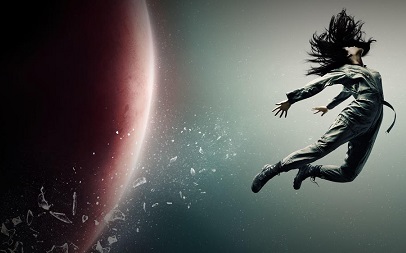 With the second season of SyFy Channel’s The Expanse premiering February, it’s worth taking a closer look at the show’s first season through a postcolonial lens. This article contains minor plot spoilers for season one.

I’ll start with a broad overview: The Expanse is set in the 23rd Century. The Earth and its moon are governed by the United Nations. Mars is in the process of terraforming and an independent military power. There are also a series of settlements in the asteroid belt and on the Jovian moons under the authority of either the UN or Mars, which provide material resources to the inner planets. The citizens of the asteroid belt—called Belters—constitute an exploited underclass, their working conditions familiar to anyone knowledgeable about sweatshop labor, or the 19th century American and European factory systems. The Outer Planets Alliance (OPA) is a radical Belter group which seeks independence from both Earth and Mars.

The Expanse originated as a Role Playing Game setting developed by Ty Franck, then morphed into a series of novels co-written by Franck and Daniel Abraham, collaborating under the pen name James S. A. Corey. Season one of The Expanse is an adaptation of the first novel, Leviathan Wakes; it consists of 10 episodes and was originally broadcast from November 2015 to February 2016.

With the series having its genesis as an RPG setting, there’s a substantial amount of worldbuilding at work, which doesn’t bog down the show’s narrative, but provides fascinating material for postcolonial analysis. Not having read the original source material, I’m going to focus mainly on the information presented in the show’s first season, with some reference to behind the scenes material.

Season one of The Expanse shows us a fair amount of Belter culture, more than we see of Earth or Mars. Most ubiquitously obvious is Belter Creole, spoken by many of the main and supporting characters. Linguist Nick Farmer drew on at least a dozen Earth languages to create Belter Creole, and also incorporated many signs and gestures. The breadth of languages reflects the multifarious nature of the belt’s earliest inhabitants.

According to an article in Ars Technica, Farmer specifically took inspiration from Haitian creole in constructing the Belter language. In the case of Haiti, trafficked Africans from diverse ethnic groups mixed their native languages with that of the wealthy French elites who held them in slavery, creating a new language which they could all comprehend, but their oppressors couldn’t. The Belters, similarly, mixed their ancestral languages with that of the English-speaking Earther elites who exploit them to create Belter Creole.

In the same article, though not invoking the term by name, Farmer points out most of the Belter characters on the show engage in the classic tactic of colonial subjects: code-switching. They talk a mix of English and Belter, playing up the latter at events like independence rallies, the former when talking to authority figures.

It’s significant that supporting character Havelock is shown learning Belter from Gia, a sex worker on the largest body in the asteroid belt, Ceres. It demonstrates that despite being an Earther and a Star Helix police officer, Havelock cares about the Belters and wants to show proper respect. This point is reinforced in a scene where Joe Miller—Havelock’s partner in Star Helix and one of the show’s protagonists—chastises Havelock for befriending a Belter sex worker (which is apparently less valid in Miller’s book than paying her for sex). In response, Gia castigates Miller, praising the fact that Havelock, unlike his fellow officers, is actually willing to venture into Ceres’ red light district.

Miller’s position is the inverse of Havelock’s: a Belter the other Ceres Belters consider a traitor to his people. There’s even a term for it, which an OPA firebrand hurls at Miller in one of the very first scenes of the show: “well walla.” It literally means “gravity well person,” or someone who identifies with the gravity wells of Earth and Mars rather than the low-G living conditions of the belt. Malcolm X used the term “House Negro,” but the archetype is ubiquitous throughout colonial history. Promoting collaborators among the colonized subjects and granting them certain privileges in exchange for their help keeping their fellows in order is a classic tactic of the oppressor. While the epithet is only used once, Miller’s perceived status as a “well walla” is a recurring theme of his story arc on Ceres.

It’s fitting that the Belter word for collaborators invokes gravity, as at various points throughout the season we’re reminded of the latter’s importance to them. Later in the first episode, Miller explains the effects of growing up in low gravity on Belters to Havelock, such as the need for medical intervention to ensure proper development. Belters being an underclass, they rarely get premium treatment. Miller himself has a minor spinal deformity, because he “got the cheap bone density juice when he was a child.” An extreme example is that of OPA leader Anderson Dawes’ late sister, Athena, whose “bones were like chalk from spending a lifetime in zero-G,” and whom Dawes killed—to his lasting regret—when his family couldn’t afford to care for her.

Growing up in low-G also means Earth’s full gravity is literally torture for Belters, a fact another of the show’s protagonists exploits in the first episode to interrogate a Belter terrorism suspect. (It’s that kind of show.)

Throughout the show, we’re occasionally shown examples of the Belters’ continuing oppression. A subplot in episode 6, “Rock Bottom,” depicts a Martian officer abusing his power to ruin the livelihood of Mateo, a small-time Belter asteroid prospector, in a depressingly familiar scenario to any colonial subject interacting with the regime’s enforcers. Episode 5, “Back to the Butcher,” has a subplot depicting the tragic conclusion of an uprising on Anderson station several years before the main story. The workers took over the station because their children were suffering hypoxic brain damage due to the low-oxygen working environment. “The company is denying us medical assistance and they’re denying the problem even exists,” their spokesperson, Marama Brown, explains. The workers eventually cave and surrender to the UN Marines bearing down on them, but the Marines destroy Anderson station, killing everyone aboard.

The OPA uses instances like these and arbitrary air and water rationing to stir up riots on Ceres; and inspire Mateo to launch a suicidal attack against the Martian patrol ship Scipio Africanus.

Interestingly enough, the OPA are neither the heroes nor the villains of the story; they’re just another faction, like the Martian government and the UN, whose agents are sometimes benign and sometimes not. Likewise, anti-colonial struggles on the part of the Belters are tangential to the main plot of the season. The show depicts anti-colonial activity, but is ambivalent about its morality and unclear about its effectiveness.

Not having read the novels, I can’t say whether the show will ever take a position on anti-colonial struggle, for or against, or keep it an unresolved theme throughout the series. In any case, even if the postcolonial material remains on the sidelines, it provides rich opportunity for consideration and discussion.