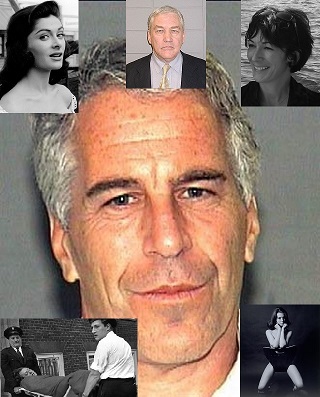 Some attention has already been paid to a party in Chicago with a number of luminaries attending over a decade ago. It was the surprise birthday party of newspaper magnet turned convicted felon Conrad Black. The guest list and even seating arrangements became newsworthy when the billing became evidence at Lord Black's trial. Forty years before another wealthy set became the subject of a scandal the subject of a scandal that brought down a government. Now, a decade later, a Prince is fighting off accusations of having a teenage sex slave. There is a chain of characters that runs through these seemingly unconnected events, along with two shadowy themes: intelligence operations and blackmail.

The Hacktivist group Anonymous has announced a campaign called #opdeatheaters in response to an ever growing mountain of reports that the British government covered up organized trafficking in children that resulted in dozens or hundreds of survivors and some victims that did not survive. The effort has expanded to focus on institutional child trafficking and abuse by elites worldwide.

Some voices are calling this long standing pattern an increasingly generalized pathology of the elite sector of society. Forbidden sexual behaviors, whether abusive like child rape, or simply maligned or criminalized as adultery and homosexuality once were, have been the central theme of blackmail throughout the ages. Blackmail has been a tool of intelligence work since the profession was normalized as a function of the state.

Despite legal suppression, lawyers, power and privilege, the world knows that something happened involving Prince Andrew and the convicted billionaire sexual offender Jeff Epstein on the latter's private island. Witness statements and evidence gathered for Epstein's 2007 trial states that the latter not only furnished at least some of his friends with under aged girls for sexual massages, but recorded the events on hidden cameras placed throughout his home. Considering his documented connections to the intelligence community, this pattern suggests an ongoing operation, known in that business as a honey trap.

Previous reporting has documented Epstein, his girlfriend Ghislaine Maxwell and Clinton booster Lynn Forester all attending a surprise birthday party for newspaper magnet and convicted fraudster Lord Conrad Black in Chicago in 2005. The attendees of the party were listed in both court documents and news articles during Black's trial. Counting Black and his wife, there were 86 people listed as guests, 46 of which attended as couples where both members were listed. It was a society pages affair. Comparing the guest list with Epstein's phone book gives a stronger than expected correlation. The guest list contained 15 people from it. Spreading that 15 over couples produces 13 couples with one or both members listed. Thus Conrad Black's birthday bash was 25% buoyed from an apparent blackmailer's little black book.

One lady had no apparent connection other than class, no apparent escort, and flew in from London for the affair. That Lady should have known better. Lady Dudley, formerly the actress Maureen Swanson, had been in the company of a man who blackmailed for an intelligence agency more than a half century before. This operation failed catastrophically and the resulting scandal led directly to electoral defeat for the Conservative party. The Lady Dudley brought libel suit under British law twice in subsequent decades to keep her name far from any association with the whole affair. Yet, as a septuagenarian, she traveled half a world away without her husband to attend a party full of media moguls and personalities, politicians and people associated with the defense and intelligence sector.

Lady Dudley's romantic connection to one of the principals in the intelligence operation turned farcical scandal (Andrew Loyd Weber later made a musical of it) has never been proven. The principal, playboy Steven Ward, had been commissioned to draw her portrait some years earlier and they became friends. Ward had many young women friends, one of which was being used, under his supervision, to entrap a soviet diplomat (who was actually a spy) and force his defection. The then young woman Christine Keeler, was sued years later for describing the Lady Dudley as “one of Steven's Popsies.” Keeler was at the same time romantically involved with the Minister of War John Profumo.

Lady Dudley was part of a social circle where the same young working class girl was being used by an intelligence asset to entrap a Soviet agent. At the same time the same girl was sleeping with the minister of war who was married to a former actress who was Dudley's contemporary. When Keeler's other lovers jealousy turned to violence the police became involved and a circus ensued. Ward was convicted of living off the earnings of prostitutes and died of a barbiturate overdose before sentencing. His death was ruled a suicide but some believe he was silenced by British intelligence. Silence around scandal is still being enforced today through the use of national security law. Dudley spent considerable money in court silencing Keeler decades after the scandal was relevant. Why then was she in the company of people like Epstein, who seems to be a modern incarnation of Ward? Alongwith incarnation comes his girlfriend Ghislaine Maxwell, whose father smuggled arms for Israel and died under mysterious circumstances.

While #opdeatheaters focuses on the misdeeds of the powerful going back to the 70s and 80s, there may be a bigger picture. These misdeeds, and their covering up, may be standard operating procedure for intelligence agencies where the children involved may simply be collateral damage in the struggle to enforce compliance amidst the elite. We will investigate and report as any and all information becomes available and provable.