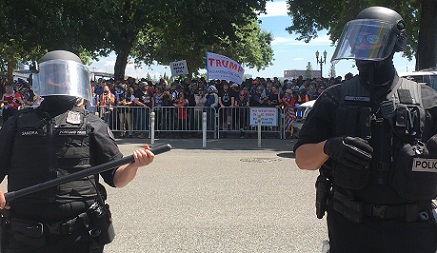 Yesterday, August 4th, for the second time in under 40 days, Patriot Prayer and the Proud Boys marched against immigration and support of President Donald Trump. For the second time, police launched an unprovoked attack against antifascist protestors without warning but with their full arsenal of crowd control weapons. Tune 30th march by the same group attempted to use police escort to reach and attack an anti-ice encampment. Police used rubber bullets and tear gas in an unsuccessful attempt to assist the fascists in breaking through. They failed to cause enough harm so they did it again.

The march was organized by Joey Gibson, leader of the Patriot Prayer and Republican candidate for Senate in Washington. It was supported by the Proud Boys and a less coherently organized and identified smattering of white supremacists bussed in from around the Pacific Northwest. Blue lives matter flags were seen flying in the crowd alongside swastikas and other symbols. Some wore t-shirts saying “Pinnochet did nothing wrong” with a picture of people falling from helicopters on the back. This is a reference to the practice of drugging teachers and union officials and dropping them into the Pacific Ocean by the military dictatorship of August Pinochet in Chile. They and others had the letters “RWD” on the their arm standing for “Right Wing Death Squad.” 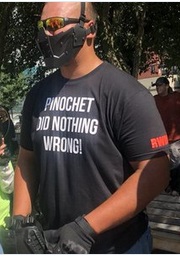 While Gibson relocated the start of his march and rally to a place off of federal property so the express purposes of allowing his supporters to carry firearms legally, the mayor of Portland, Democrat Ted Wheeler used the media in the run up to the event to tell citizens to stay home. This echoing of the standard Wiemar Democrat approach to fascism, which is to behave like an ostrich, gave the Portland Police the green light they had been touching themselves in anticipation of having to attack the over 1000 residents who turned out against armed fascists bussed into their city. 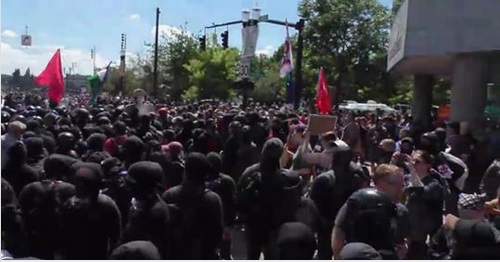 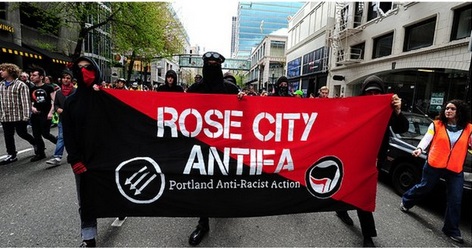 As the fascists marched, they were shadowed by antifascist residents of Portland from several political groups and a number of others with no visible affiliation. As the video above shows, the police attack was unprovoked. The police prepared, claimed there had been some kind of object thrown, then began to attack the crowd which briefly held it's ground before being pushed back.

The police deployed concussion grenades from a number of 37mm launchers as well as rubber bullets and paintball rounds filled with teargas. The direct fire weapons were aimed at protestors heads as opposed to at the legs, which is how they are supposed to be used. Both video of the police aiming at head height and pictures of the resultant injuries show clear intent to maim and kill. The police had recently complained in public about the mayor not permitting them to be used on federal property to eliminate the encampment at the local ICE office and thus were clearly there in lockstep with the fascists and their agenda.

At least one local reporter was struck in the face with a pepper ball and had to be flee. 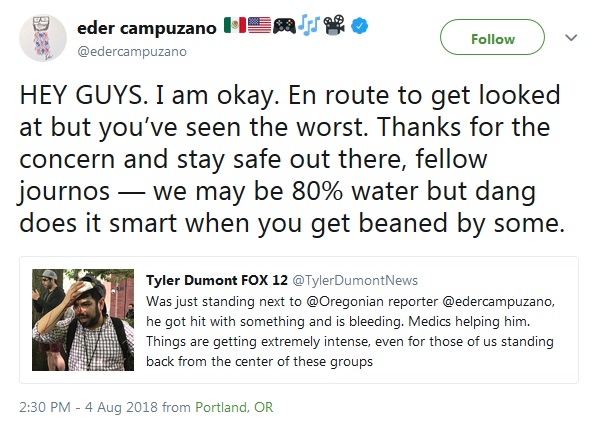 The picture below shows a plastic projectile embedded in the back of a protestors helmet. This person was shot in the back of the head while running away. They were hurt and had they not been wearing the helmet they would likely have been killed. The intent of the police, as shown by how they attacked, was to kill residents of their own city in order to help fascists march.

It can be clearly heard from the loudspeakers that the disperse order was both per-recorded and well rehearsed. The police planned the time and place of their attack along with their excuses in advance. From the flags to the messaging to the actual attacks the evidence is clear. The police are culturally and operationally in the fascist camp from commissioner to union leader to command staff down and through the rank and file. The police attacked a crowd of civilians to support the agenda of a group that openly claimed to be a Right Wing Death Squad in support of Donald Trump.