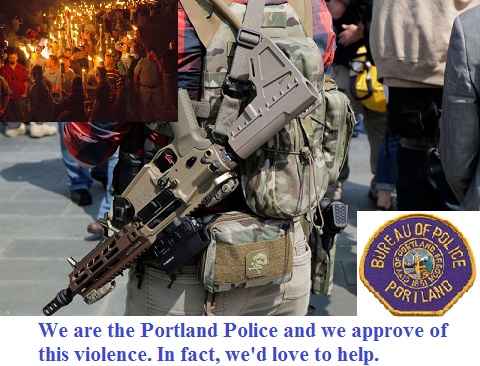 Ample footage exists and is in circulation of Portland Police assisting the fascist group Patriot Prayer in attacking counter-demonstrators on August 4th. This footage, along with footage from a similar event on June 30th and a nighttime attack this past weekend on October 13th show a months long campaign. In each case, one or more right wing groups have had a rally then marched with police protection to an anti-ICE or anti-police abuse rally and attacked it. In each case, rally-goers were attack by police as they began to successfully defend themselves. Each case this was followed by a police attack on the rally goers were attacked with rubber bullets, clubs and chemical weapons and the right wing assailants enjoyed a protected retreat.

Yesterday, Portland Mayor Ted Wheeler was finally informed that Patriot Prayer members and people from associated groups had occupied the tops of buildings along the planned march route with firearms during the August 4th affair. Normal people call that a sniper's nest. Portland police called that nothing serious and waved the fascists away without arrest or even getting their names. It was not even worth mentioning to the mayor's office until over a month after some kind of investigation, where the police investigate themselves, was called for as a public relations concession.

In practice this means that people demonstrating against police murder of their family and community members can have their demonstration or vigil deemed illegal by the police because it might be attacked by fascists and their police sympathizers as the track record of both parties indicate.

The American Civil Liberties Union (ACLU), has taken a short break from suing various cities and states on behalf of the rights of fascists to attack people in the streets as they did in Charlottesville, in order to issue a lukewarm statement of pearl clutching centrist performative dissent.

The ACLU was happy to point out the laws already exist against spraying bear mace into the crowds. It is assumed that everyone knows it is illegal to snipe at people on street corners from the top of parking garages. The ACLU has not spoken a word about the right of people to hold a vigil for a person murdered by police or people opposed to the forced separation of children from their mothers in America's immigration concentration camps. They had this opportunity to step up and sue to defend non-fascists against documented state attacks and planned assassinations by people that wear shirts praising right wing death squads in Chile and they merely issued a bland statement before going back to stuffing envelopes for the Biden 2020 campaign and drinking white whine.

Ted Wheeler, being the typical centrist democrat cast in the 1930 Wiemar mold hopes that he can appeal on behalf of his party to split the insurgent right wing forces ahead of the November elections and shave off the 10% of the fascist vote that he thinks could stomach him. The last demonstration they held began as a demonstration against him for not brutally smashing anti-police brutality demonstrators off the streets without the fascists having to show up. It would seem that he has materially surrender to their position and wishes to be friends.

The Portland Police are now widely tweeting their tip line to get “information” on the fascists they let go Saturday night. This is mirrored by the NYPD tweeting their tip line for the same reason in the wake of Friday night's 30 on 3 attack by the Proud Boys on the Upper East Side. The identities of Proud Boys present and participating in the event have been all over the internet along with the identities of many of the Portland assailants. The published dossiers have included names, places of work, addresses and photos. No acknowledgment of this information nor actual action on it has been taken. Indeed, Proud Boys leader Gavin McGinnes has proudly paraded his genial and fraternal relationship with the NYPD all over mass media without criticism or calls for investigation.

What the public is witnessing is the wholesale surrender of the mechanism of local government to unelected police who are open fascist sympathizers and to actual fascists themselves. In all these cases, along with the attacks this summer in Louisville, San Antonio and in other cities the only defense of people protesting ICE or the conduct of the police has come from withing the protests themselves. The public should realize it is on it's own as there is now bipartisan consensus that there is no right to public speech unless you are a fascist.