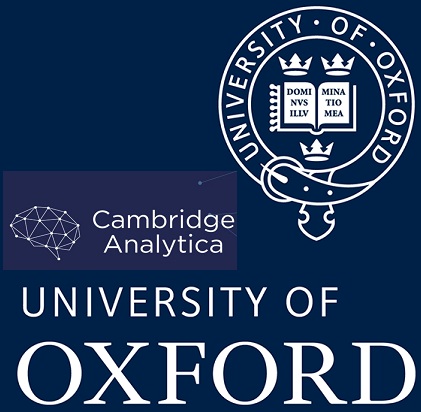 Without former Cambridge University professor Alexander Kogan’s desire to obtain Facebook data for his research, Cambridge Analytica would never have had access to the 87 million profiles they used to elect Trump in 2016. But Dr Kogan was not the only academic who worked with parent company SCL and Cambridge Analytica itself as they developed methods for data gathering, analytics and rolled out unethical campaigns, for Donald Trump, the UK’s Brexit campaign and worldwide. Many of the firm’s academic and commercial collaborators remain unknown, and some universities are actively obscuring their staff’s involvement.

The prominent social scientist, professor Raymond Duch, Director of the Centre for Experimental Social Sciences (CESS) at Nuffield College at Oxford University, once performed data analysis for SCL Elections. Now, on December 5th, Duch is hosting a workshop on social media including another prominent academic, Temple University professor David Nickerson. Nickerson’s talk calls into question the effectiveness of CA’s behavioral microtargeting arguing that personality traits are difficult to predict and only weakly linked to behaviour. He is speaking about “Why I was not worried about Cambridge Analytica (and you should not have been either).” But the connection between this now disgraced network of companies and another of the world’s most prestigious universities mean we should continue to be worried about this firm and its unknown academic ties.

SCL sought to involve academics from universities worldwide, including both Oxford and Cambridge, in their work. Sometimes, they would subcontract Ray Duch, at the suggestion his business partner, then a PhD student at Oxford looking at emotion in campaigns, to aid them in research design, Brittany Kaiser and another source confirmed. Their company, was incorporated in October 2014 and dissolved on 1st March 2016. This service was apparently ‘really expensive and used to design the qualitative and quantitative research programs.’ Duch said he worked on projects for SCL for 6 months only between fall 2014 and February 2015 to help them with sophisticated data analytics on public opinion surveys for a range of clients, the work included regression and identifying missing values in a dataset. He applied the kind of analysis in his 2008 book, ‘The Economic Vote.’ They did no social media work with SCL and did not work with the company in the US or UK.

In his academic work Duch has developed a digital app to predict voting through social media; for this project he followed ‘the digital trace of Texas Facebook users to predict the outcome of Texas congressional district elections’ in 2018 and use ‘public, explicit measures of candidate support on Facebook — such as likes, loves or explicitly positive comments — as proxies for voting intention.’ Raymond Duch was using MTurk to do this — paying users $2 to ‘Fill in information about social media users in the USA’ and ‘Navigate to the about page of a given user by carefully following the instructions; fill in a survey about this user with their publicly available info; repeat for the specified number of times and submit the hit.’ This study matched Facebook data with voter data obtained in a non-partisan way for what seem legitimate academic purposes. Duch said no data was shared with campaigns. They did no social media work with SCL and did not work with the company in the US or UK. He had no contact with the Cambridge University professors involved in the recent Facebook scandal. Duch is an expert in online experiments and was awarded a Google Faculty Research Award of $63,913 in August 2014 for “Innovating Behavioral Experiments on the Internet”.

As Duch used his university email address for the SCL work, I sought information about Duch’s SCL-related projects held by his university via freedom of information requests submitted by an assistant. In particular, we requested information on a SCL project in Argentina.

Former Cambridge Analytica CEO Alexander Nix has admitted that SCL worked in Argentina on an “anti-Kirchner” campaign during his testimony before the Digital, Culture, Media and Sports Committee of the House of Commons, but refused to identify who hired them and implied that it may not have moved forward. Nix has denied it was Paul Singer, the chief of the Elliott Management Company hedge fund. Cambridge Analytica/SCL Group is subject of a major political scandal in Argentina and the company is being investigated by the National Electoral Chamber for work involving the use of fake social media accounts and ‘retired Intelligence and security agency officers from Israel, the United States, U.K., Spain, and Russia’ allegedly aiding President Mauricio Macri’s political party and targeting then-President Cristina Elisabet Fernández de Kirchner.

I have seen an email from 6th June 2015, when Raymond Duch wrote to Alexander Nix saying Duch’s colleague ‘e-mailed yesterday and indicated you were waiting on something from me regarding Argentina. I must have dropped the ball on this — can you remind me what you need and I’ll get it to you asap.’ An anonymous source with knowledge of the work stated that the work in Argentina was on local elections, work undertaken in two parts, between fall 2014 to February 2015. Further work was proposed by SCL in May 2015 but did not go ahead. The anonymous contact did not know whether SCL ended up working on the presidential elections. And I spoke with Duch and he said he had ‘nothing to do with the Argentinian presidential elections’. But asked to confirm which countries he worked on with SCL, Duch said he ‘could not comment on specific clients’.

While Nix admitted that SCL did work in Argentine politics there appear to be no campaign finance records showing the company worked in the country — even though Argentine laws require political parties to report where they get the funds for campaigns and what they have spent them on. Univision’s reporting suggests this may mean CA may have been a subcontractor for the campaign or using another name. It is possible the vital information I have sought from Oxford University may be able to shed light on this and other campaigns. Its release is of significant public interest both to the major ongoing political investigation in Argentina and more widely. It is outrageous they have been denied so far and that work is being dismissed as ‘personal.’

Long before Chris Wylie helped organize Kogan’s partnership with CA, SCL, the parent company, were reaching out to other academics. In February 2011, one employee of SCL, tried to involve Duch’s now-guest speaker, David Nickerson in the company’s work. Between 2009 and 2010, Betsy Stevens was the Chief Behavioural Scientist in PSYOPS at SCL, then worked on ‘Special Projects’ until October 2011. She worked on SCL’s Caribbean campaigns including St Lucia’s election in 2011. Stevens sought to involve Nickerson, then a political scientist at Notre Dame and stated to an SCL employee in an email on 12th August 2011 that Nickerson ‘was very interested in studying the ‘shadier’ side of elections.’ In the email Stevens said ‘we were discussing his possible involvement in one of our not-so-clean campaigns’ and that Nickerson ‘would love to work with SCL (or someone) to collect some data.’

Nickerson’s Latin American research from 2013–14 included ‘the psychology behind supporting corrupt politicians’ including questions of how poor and rich voters punish corruption differently at the ballot box. Nickerson explained, ‘part of my academic research concerns vote buying, an abhorrent anti-democratic practice’. In speaking with SCL, he hoped ‘to better understand the phenomenon’ but he and Stevens confirmed he did no work with SCL in the end. Nickerson was transparent about this long-ago exchange, had no further contact with the company, and had no idea Duch had contracted for SCL when he invited him to speak.

David Nickerson later served as “director of experiments” for Obama for America in 2012, then was a Research consultant on Hillary for America in 2015–2016. Betsy Stevens said she did not stay in touch with SCL. She went on to work at Google in “People Operations” in October 2014, where she remains today.

What is concerning is that Nuffield College, without having declared Duch’s involvement, is now hosting a workshop where he selected a talk — from several suggested by Nickerson — that dismisses the importance of Cambridge Analytica and the effectiveness of their analytics. I hope to generate a necessary debate about this, including at the workshop concerned.

It can be difficult for anyone to evaluate the nature of such companies’ work, which is why I’ve argued this influence industry needs greater transparency and regulation. Even people working for such companies — due to the siloed nature of the work and opaque business structures — do not always know the extent of what is done on campaigns they contribute to.

Universities, rightly, encourage academics to be engaged in the ‘real world’ yet need to wise-up to the nature of apparently ‘personal’ paid work in industries that are opaque and often ethically problematic.

Cambridge University were criticised for the way they handled transparency requests during the 2018 scandal. I am revealing this necessary context now, ahead of Prof. Duch’s workshop at Nuffield College because it is shocking that, in the wake of the Cambridge University scandal, another of England’s most prestigious universities sought to host a speaker downplaying Cambridge Analytica’s wrongdoing, without declaring Duch’s relationship to SCL Elections. All while the university asserts his SCL ties are apparently ‘personal’ and rebuffs efforts by those seeking important information about his work for the firm.

The FOI rejection by Nuffield College is now the subject of a complaint to the British information commissioner and I hope they will decide in favour of the public interest as it might illuminate both how the company operated and events leading up to an important Argentinian presidential campaign.

You can read more of Dr Emma L Briant’s extensive research in her upcoming book ‘Propaganda Machine: Inside Cambridge Analytica and the Digital Influence Industry’ expected 2020. And see her website for further articles and information.