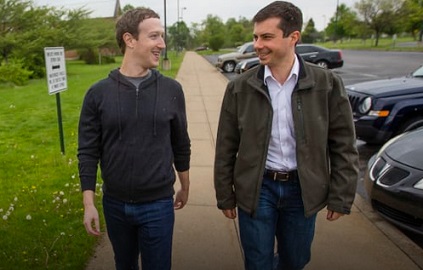 A great deal of useless noise has been made about Facebook's seeming support for Donald Trump and the tech giant's refusal do much to curb it's selective censorship of the collective news feed. Within Facebook, right wing support seems to come from early investor Peter Thiel. Mark Zuckerberg, and his wife Priscilla Chan, seem firmly in the center of the political spectrum when they put their considerable money where their mouths are not. The billionaire couple put considerable effort into strategically supporting whatever centrist was put forth since at least 2017. Buttigieg's campaign seems to be where they decided to place carefully built machine.

Buttigieg is no stranger to Facebook. He was at Harvard when Mark Zuckerberg created it and was user number 287. The two met formally two years later. Some have referred to Buttigieg as the soulless Manchurian candidate. Following that model puts Mark Zuckerberg in a Queen of Heats dress.

Buttigieg was not programed by Facebook hynosis. His campaign program, in the literal sense of the word program, came pre-packaged with a bow straight from the Zuckerbergs and the DNC. It came in the form of two key technology hires, Nina Wornhoff in April of 2019 as organizing data manager and Eric Mayefsky in June 2019 as senior digital analytics advisor. Both were directly and recommended by Zuckerberg this was publicly confirmed in October.

Mayefsky had worked for Zuckerberg at Facebook from 2010 to 2013 before moving over to the Peter Thiel backed wikipedia competitor Quora. His roll was in monetization where started as an intern and worked his way to manager.

Wornhoff first worked for the Zuckerbergs as a machine learning engineer for the Chan-Zuckerberg initiative in 2017. She moved directly to the Buttigieg campaign from that post. She was likely to have met Buttigieg in passing during the 2018 mid-term elections while she was simultaneously also working in the Democratic Party's Indiana Coordinated Campaign as a staffer. Apparently Zuckerberg's machines had to learn on their own while she helped Mayo Peter stump for various other candidates around Indiana.

Prior to her employment there, Wornhoff was an early early employee of Deck Technologies. Deck is a political consulting firm that leverages technology to help a candidate “take action on that knowledge by building campaign plans and identifying the exact voters you need to reach.”

Deck Technologies has only 8 employees and only 6 of those have Linkedin profiles. None of those six worked there before 2019. Wornhoff ceased working there in 2017. It is as if the company was dormant in a Zuckerberg's gift box for two years until needed. There was no one building new products or processing lessons learned from the 2018 mid-term election, which would have provided important clues to first deploy the product for a hotly contested primary in 2020. It is as if Wornhoff was instructed to put her work aside, do something else, get politically connected in Indiana and await her orders.

The remaining 6 identifiable employees of this consulting firm, all of whom are new, will raise eyebrows almost instantly. Four of them, thus 2/3rds of the known employees and half the total employees, previously worked for the Chan Zuckerberg initiative. All of them moved to Deck Technologies after Wornhoff joined the Buttigieg campaign. Thus five key people deployed from the world of Greater Facebook to the Buttigieg campaign and it's satellites on the direct say so of Mark Zuckerberg.

One remaining two employees, although he is not a former foot soldier of the Zuckerberg empire, is still a former soldier. Nathan Ramia is a West Point Graduate and former communications officer serving in various armored reconnaissance units. He moved to Deck from Blue Labs which “was founded in 2013 by the leaders of the Obama for America data analytics team. It leverages innovative statistical methods and modeling to help organizations work smarter and seize opportunities for social good.” He worked there since March of 2016 first as a team leader and then as Director of Product, the position he holds for Deck Technologies. He also has a Masters in Strategic Studies from the Australian National University.

Rounding out our six non-mystery employees is Amanda Dobbyn who splits her time between Deck and Early Bird Software, which uses data analytics to help car dealerships get repeat business. Apparently it is not a huge jump from used car salesperson to politician.

Buttigieg shows every sign of being groomed for his role and handed the nomination by the DNC with help from tech titans. The involvement of Facebook in the Iowa app fiasco, the Iowa Democratic party and now this revelation of carefully laid plans by the Zuckerbergs shows both a clear bias and massive pre-built capacity to manipulate and leverage data to create the appearance of consensus where none exits.