The Homeland Security Journalist Database is now a secret database 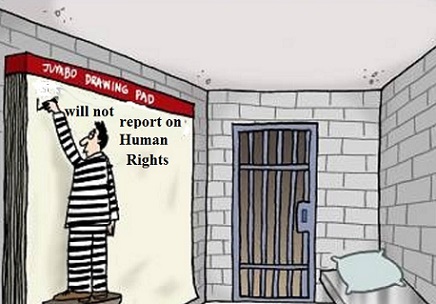 It is often said that you should not do certain things because you will wind up with your name on a list, or on “the list.” There have always been rumors of a semi-mythical list the government keeps of subversives or radicals, or enemies. In truth, the government, all governments, have always kept lists of enemies. This is not unique to fascists, or people who fetishize Prussia, or people who try to contact J Edgar Hoover on Ouija boards. In America, we have lists. No-Fly lists are a start. We also have databases, kept by the NSA, that have been the subject of massive revelations by Edward Snowden for starters. This journalist database is different. Its a database of people who are in it for doing their jobs. Journalism used to be the foundation of a free society. Any country with a database of journalist kept by anything with the words “Homeland Security” in it does not have a free society. In the case of the Trump Administration, enemies means scientists, journalists, brown people and anyone with an IQ greater than room temperature.

This particular database is more noxious then most. It is also a secret database and apparently illegally secret. As the Mockingbird previously reported, the database project was announced on April 5th and there were 17 companies wanting to bid on the project as of April 9th. Since that date, no new information has come to light and there has been little public discussion.

The bids were due by April 13th, and presumably the award was to be granted on April 18th. On April 13th the Electronic Privacy Information Center (EPIC) submitted a Freedom of Information Act Request on the database project, seeking to know it's privacy guidelines, scope, purpose and contractor.

The Freedom of Information Act requires that a request be responded to or at least acknowledged within 20 days. The Department of Homeland Security, as of yesterday, May 14th, has not even acknowledged the request. They are flaunting the law.

The contract solicitation number was RNBO-18-00041. That has been scrubbed and the pdf containing who had bid so far has been removed from government websites. There has been no follow up from the mainstream press. The only two entities covering DHS making a list of journalists, as well as keeping the list and even the contractor secret, are EPIC and the Mockingbird.

If the contract was a secret or the contractor was a secret, DHS would have the right to answer EPIC's request with a denial. They refused to answer at all. Simply put, they do not care about the law of the homeland they are securing, and feel no responsibility to answer.

No staffer at EPIC wished to be quoted as to the organizations official position on their request, although they did promise to keep the public updated through their website. After some wrangling for comment, they stated that “we are continuing to pursue this request by all means necessary to figure out what the government is conducting regarding the database.” EPIC is narrowly focused on the privacy impact of the database, not the overall impact of the existence of the database itself. They felt this reporter would best serve the public by quoting the following document which is instead linked in full: https://epic.org/2018/04/epic-pursues-privacy-impact-as.html

The Mockingbird, as a news source, takes a much more strident view of secret spy agencies keeping secret lists of journalists for secret reasons. Aside from our function as part of the fourth estate, like all of nature's creatures we were born with a basic instinct to survive and we view this database as an existential threat to us personally, collectively and to a free society as a whole. We will continue to make all information available as soon as it can be known.