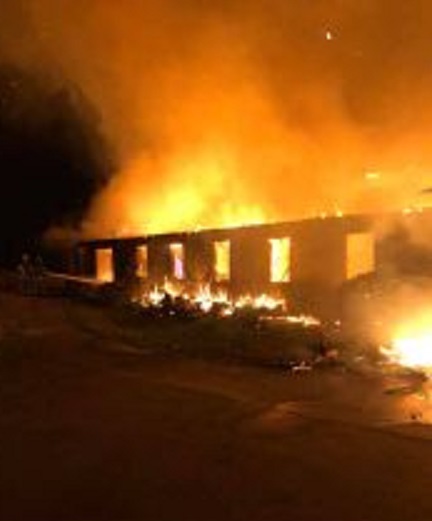 When a building is engulfed in leaping flames before the fire department even arrives the situation often termed suspicious. When symbols are found spay painted nearby it term applies doubly. When that building contains the executive offices and 90 year of archives of a civil rights organization truthful people use words like racism and arson. On the night of March 29th this is what happened to the Highlander Research and Education Center in New Market Tennessee, located about 25 miles outside of Knoxville.

The symbol seen below is what was spray painted on the walk nearby. Although it seems innocuous, it is the symbol of the Iron Guard which was the ruling fascist party of Romania during the Second World War. It is also associated with hardline adherents of certain sectors of the Orthodox Church, which members of the neo-nazi group Traditionalist Workers Party (TWP) are encouraged to join. 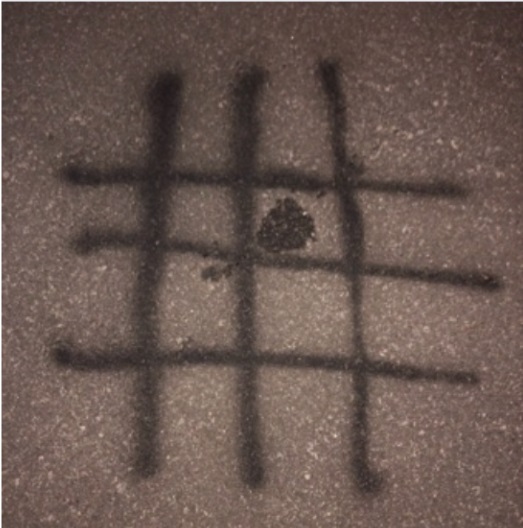 The TWP was one of the groups that convened the murderous and now infamous multi-group, multi-day series of fascist marches in Charlottesville Virginia in 2017. They also maintain a strong base in the Knoxville area and are currently building a compound somewhere in the nearby hills. The rock, seen below, is a feature at the UT Knoxville campus that is often defaced with racist graffitti, including the symbol found at the site. 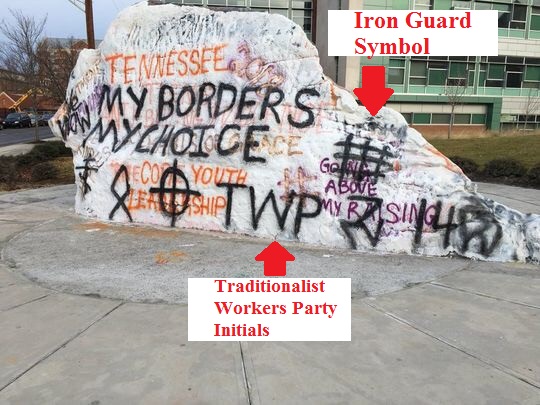 The picture below is a group of local TWP members in front of the rock, flashing white power hand symbols the racist graffiti they just made in the background. 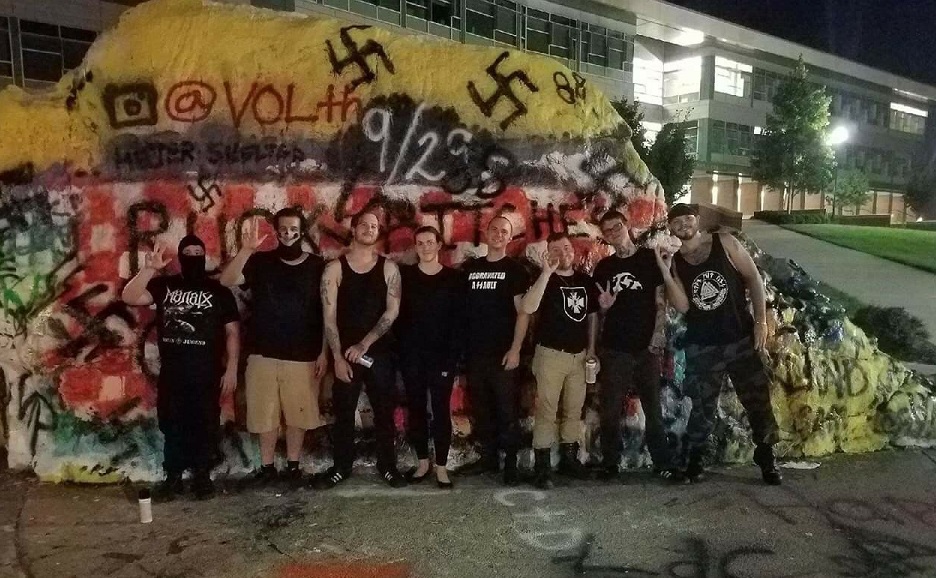 This would seem like a pretty much open and shut case for any investigator. There is symbol at the site. There is the motivation. There are the people who live in the area who are willing to break the law. This is America, if they had been black, the police would have picked a half dozen people at random and shot every juvenile member of their families in the back and then tasered them on their genitals until they confessed before sunrise on March 31st.

However, this is America and the target was a civil rights icon. It was the main building of a 10 building campus. Before the Highlander Research and Education Center moved to this location the trained Rosa Parks in civil rights work. That, and it's association with both Martin Luther King JR and alleged communists, caused an FBI lead campaign to have it's original facility shut down.

Now the TWP has picked up where J. Edgar Hoover himself left off and destroyed the physical records of that, and the environmental justice work they have done in coal country over the several decades, to be destroyed along with their administrative offices.

The current leadership of the Highlander Research and Education Center has not gone public with what it knows, probably at orders of the very same FBI that worked to destroy them in the past. No authority has called this arson, although that is expected to be announced later this week by the Jefferson County Fire Marshall. They are waiting until the trail is cold and their cousins or the perpetrators (if those are two different things) have left town after sobering up from all the free beer they got from the FBI when they were done with their long night of playing with matches.

All messenging from the Highlander Research and Education Center avoids mentioning the cause of the fire or the graffiti. As if somebody left a smoke in the wastebasket. As if this was a natural event. In a sense it is a natural event. A hate crime that is an infrastructure attack on the civil rights movement is a perfectly natural event, like a drone firing a missle into a school bus in Yemen while the pilot sits at the Springfield Air National Guard Base here in Ohio.  That natural event is followed by the natural denial and coverup. Without a cause a fire can not be arson, without arson there is no crime, without crime there is no criminal and without a criminal there no fascist menace to confront, just the sad natural day to day events of life in America.