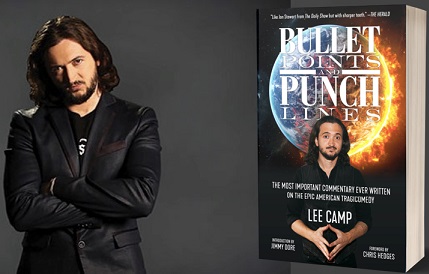 As a disclaimer I need to note Lee Camp and I go back a ways. This allows me to say assurance he has always been able to be funny about things that are horrible. I first became aware of him in October of 2012 when I had my first big story. I had caught Mitt Romney, through a not very long chain of proxies that included his son Tagg, having an ownership interest in Hart Intercivic, the company that manufactured and maintained the voting machines that would be used in my home state (and other states) in the upcoming election. Lee was one of the first people to pick up the story in his Moment of Clarity Webseries where he referred to the investment vehicle, Solamere Captial, as “Tagg Romney Butthole Enterprises.” It's actually a hedge fund named after the Romney family ski resort, but Lee's naming of it was just as correct in my book. He was right, it was just another enterprise they pulled from their butthole.

I've always admired his comedic reduction of the horrible to terms that are profane. As a comedian who addresses social issues in a fact based manner, his use of rude sarcasm to describe villainy wonderfully appropriate. Profanity is appropriate when describing the profane and Lee Camp is willing to take on the profane existence we are forced to lead in his brand new Bullet Points and Punch Lines.

His humor, although slightly caustic, does not obscure his attention to facts. He uses the absurd to draw attention to the absurdity of the facts and does math that I could do more often as a journalist but choose not to because it is a tangent to the story. In the book, he comes right out in the beginning with this as he addresses the $21 Trillion missing from the Pentagon, which they called an accounting error “That's right – trillion with a “T” – an amount of money you can possibly come to terms with, so stop trying. Seriously, stop.”

I would be tempted to calculate how high a stack of $1 bills would be to reach $21 trillion. Hell, why not do that now. The answer is 5.96531 and some more decimals times the distance from the Earth to the Moon. I could figure out how long that is in light seconds, but if you cared, you would have done that arithmetic yourself before reading the end of this paragraph. Lee Camp understands the profane absurdity of dealing with the kinds of numbers that I just invoked. He can brush that aside at $1 million. “We may know what one million dollars can buy (and we may want that thing), but you probably dont know how tall a stack of a million one dollar bills is. You probably don't know how long it takes for a minimum wage employee to make a million dollars.”

Right in that last quote is the genius that Lee Camp brings to the conversation about the destiny and direction of our country, planet, and species. He uses humor to highlight the absurdity or our plight. He does so in ways that are a little hurtful to the perpetrators of our collective misery and despair.

Humor is always transgressive. It is a matter of who one chooses to transgress against. Lee Camp chooses to punch up, as always, in Bullet Points and Punch Lines. Humor can be mathematical. As an equation, humor is equal to pain over distance. We take the pain, and we put it on somebody else, and we laugh at their pain. This book has us laughing at the pain the oligarchs might feel at their exposure rather than laughing at the people they victimize, which is us.

I recommend this book. It is not on my bookshelf farming dust bunnies next to the mandatory volumes of Gibbons, read, digested and displayed. This book is on my desk, next to a pack of cigarettes beneath a framed bit of my little cousin's artwork. I'm happy to have a copy and happy to review the book. It can be purchased here. Lee Camp's comedy can be seen online with his show Redacted Tonight or in his more personal Moment Of Clarity. Give the man your attention.