A Free State of Jones in an Empty Cinema 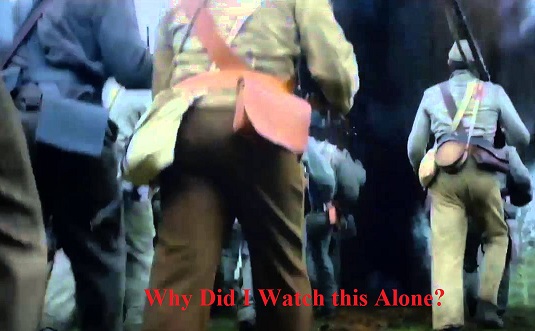 The Free State of Jones if one of the few movies I will go out to see this year, mostly because my little bit torrent elves could not bring it to me from the cookie tree. I'm not adverse to the price of admission, but I did show up late enough to miss most of First Look Cinema's “non-controversial” advertising. It was still propaganda porn that only Goebbels and Nancy Reagan could grope each other on while watching. I was subjected to only one recruitment ad this time. It leveraged alien invasion fiction from the upcoming independence days sequel with our heroic troops firing rockets from helicopters and driving tanks across a desert. Nothing is controversial if you forget who invaded what.

The theater had 6 people in it who were not me on a Friday. I asked the attendant afterwords if it had always been as sparse and he looked it up and said the film did not do as well as he would expect. Critics did not like it, so I looked that up in return. I'm not sure if Roger Ebert saw the same film as me. He referred to the script as a “lumpy, ill-conceived script.” Not that the late Robert Ebert actually wrote it, but when a nameless ghost writer makes his living writting in the name of a corpse, the smell will follow.

The actual cinematography was downright gorgeous. The use of focus change and shades of green in the first swamp scenes was amazing to these eyes, which last were overwhelmed by green in a cgi-generated wildfire explosion on Game of Thrones earlier this week. Somebody in Hollywood still knows what a lens is. This is not JJ Abrams lens flare effects, this is just good use of a camera in a Southern swamp and the proper framing of Mathew McConaughey's face.

Mathew McConaughey took a while over the course of the film to differentiate himself from his previous Southern swamp role as Rust Cohle in True Dectective. Despite the subject matter his facial expression became less dark as the film went on. Mahershala Ali nailed his role as Moses, and the makeup artists deserve special credit for aging him believably and gently over the course of the story.

The films action sequences were not overdone bullet time effects heavy eye candy. They has all the grit and dirt one would expect from a civil war film. Even in the heroic charge moments, the filmmakers did not resort to trumpet blaring mysticism of the kind seen in Glory. Misty eyed eugoglies to the foolish frontal assaults on prepared positions executed by both sides throughout the war do not need replication in film as anything other than senseless wastes of life ordered by Generals concerned less with military necessity and more with empty honor. As protagonist Newton Knight says in the film “He died for honor? That's better than dying for cotton?”

The film also did not resort to the bloodless grunt and clutch deaths of other acclaimed civil war epics like Gettysburgh. The use of gore on and off the battlefield was not overdone and included as tastefully as the meeting between a bullet and a face or can be. In a historical film, reality needs to be acknowledged. Shock value does not need amplification and the film remembers that it is a biopic not a slasher flick.

Returning to Ebert's review, I wonder not only if he saw the same film, but if he has read the same history. The main story is interlaced with the story of the protagonist's great grandson, Davis Knight, who was sentenced to five years prison for marrying a white woman after a lengthy Mississippi court drama found him to be more than one eighth black. The Mississippi Supreme Court later reversed his conviction by ruling him white rather than face a Constitutional challenge to that particular aspect of Jim Crow.

Ebert calls this entire plotline pointless “Though perhaps an interesting footnote to the main story, this digressive thread feels entirely unnecessary and dispensable.” There are people alive today who have been imprisoned for interracial marriage, and one couple is the subject of an upcoming major motion picture. I'm waiting for Ebert to call that film dispensable as well.

The worst part of both an empty theater and Ebert's tone deaf review is the controversy surrounding the making of the film and it's relevance today. The never controversial Smithsonian ran background piece on the film that interviewed Neo-Confederates that do not want Newton Knight to be remembered, or if he is remembered to be so as a “re-probate and a traitor.”

These Sons of Confederate Veterans members include a lawyer who defended Klansman against charges of murdering civil rights workers. Both this, and Mississippi Burning, which tells the tale of the murder of two civil rights workers from my Alma Mata, prove that racism is far from over. In Ohio, we remember our music majors won the Congressional Medal of Honor despite hung being by the South after failed special operations behind enemy lines.

Despite opposition from still existing Southern partisans who are obviously and openly racist enough to be quoted as such in major media, Ebert remained as dead to history as possible in his review, protesting that reconstruction was somehow successful while stating that “in reality, the Klan was effectively suppressed by actions the federal government took in the early 1870s” Really Robert? Somebody in the Union Army simply forgot to take the Confederate Battle Flag down from the South Carolina Statehouse for 151 years? Did armed racists attack people in front of police with immunity from arrest this very week?