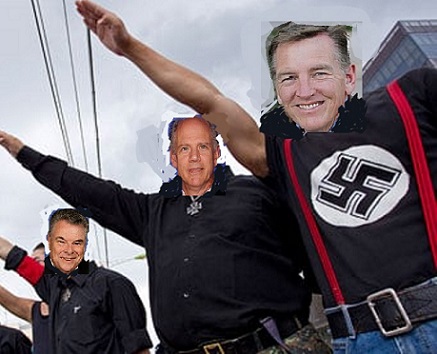 The bill makes assault or intimidation of anyone exercising their rights under the Constitution while wearing a mask punishable by 15 years in federal prison. Despite the fact that the klan has done that since the beginning of the lukewarm period of American history history books call by the misnomer “reconstruction,” the bill names only one kind of person.

The design is to make it a crime to fight back against racists in any public way. Under this new law, all a nazi snowflake would have to do is claim they were triggered by counter protestors, and everyone present would face 15 years in prison for wearing a mask or 10 years in prison for “conspiracy” if they were not.

As long as authorities can claim that some felony has been committed, such as wearing a bandana and hurting the feelings of a klansman, everyone else present could be considered a co-conspiriator whether they were “in disguise” or not. Disguise could include puppets, costumes for street theater, papercut outs of politician's faces, even so-called knitted pussy hats popularized by middle class democrat centrists.

Had this law been in effect at Trump's innaugeration, over 200 protestors who had their charges dropped after an 18th month long trial ordeal would be facing up to 25 years in prison with virtually no defense for standing in the wrong place at the wrong time.

On June 30th in Portland, the police allowed an alliance of fascist groups including Patriot Prayer and the Proud Boys to twice slip through their lines and attack counter protestors. Police then intervened with pepper gas and rubber bullets when counter protestors gained the upper hand. The nazis were on their way to protest the Portland ICE Occupation. This protest would have quickly become a physical attack with police protection. With the new law in place, everyone opposed to the nazis would have faced a longer prison term then almost all rapists are sentenced to.

This is the most outrageous attack on social justice demonstrators in the last two weeks, but not the only one. In Pittsburgh, on both June 29th and July 8th, angry white men have driven their cars through police brutality protests causing multiple injuries while facing only the most minor charges.

Peter King (R-NY) is first on the list of co-sponsors. King, not to be confused with Representative Stephen King (R-IA) who retweets neo-nazis, is also opposed to NFL players kneeling during the national anthem. He ironically compared that to giving a stiff armed nazi salute in May. Less than two months later he is set to make it a hate crime to hurt a nazi feelings. Considering the troll culture of online neo-nazis, we can expect this to happen often. King's office could not be reached for the obligatory self-serving denial of race being any component on his veiw of rights.

The law has two additional co-sponsors, Tedd Budd (R-NC) and Paul Gossar (R-AZ), a religious fundementalist homeschooling farmer who owns a guns store and a rabid anti-immigrant dentist respectively. Budd's banality is neatly matched Gossar's gall. Gossar is a pro-life politician who has consistantly moved to strip protections from immigrant children. He is an ardent climate change denier who has actually attacked Pope Francis for speaking on the enviroment, and he has done so in explictly political terms "When the Pope chooses to act and talk like a leftist politician, then he can expect to be treated like one"

Last year, when a two day Neo-Nazi rampage in Charlottesville Virginia killed one person and wounded dozens, Donald Trump called the Nazis “very fine people.” Gossar went further, claiming that the attacks were a series of false flag operations by leftists. “Let’s look at the person that actually started the rally. It’s come to our attention that this is a person from Occupy Wall Street that was an Obama sympathizer. So, wait a minute, be careful where you start taking these people to.”

The law is not up for a vote in a vaccum. It was proposed alongside other equally draconian anti-protest laws. HR 5698, the so-called “Protect and Serve Act of 2018” was put forward on May 17th. This law makes it a federal hate crime to attack a police officer. This does not mean run up and punch a cop. This means resist arrest while calling a police officer a pig. It is specifically designed to target anti-police brutality demonstrators with 10 year federal prison setences.

America has reached a point where it's civil rights laws the protect police officers and neo-nazis more than anyone else. These are the two new special classes of citizens with special rights and protections. Their mere feelings can cost a person decades behind bars if they are harmed. This author dares, nay, double dog dares, anyone to use the phrase “Free Country” around him again. EVER.