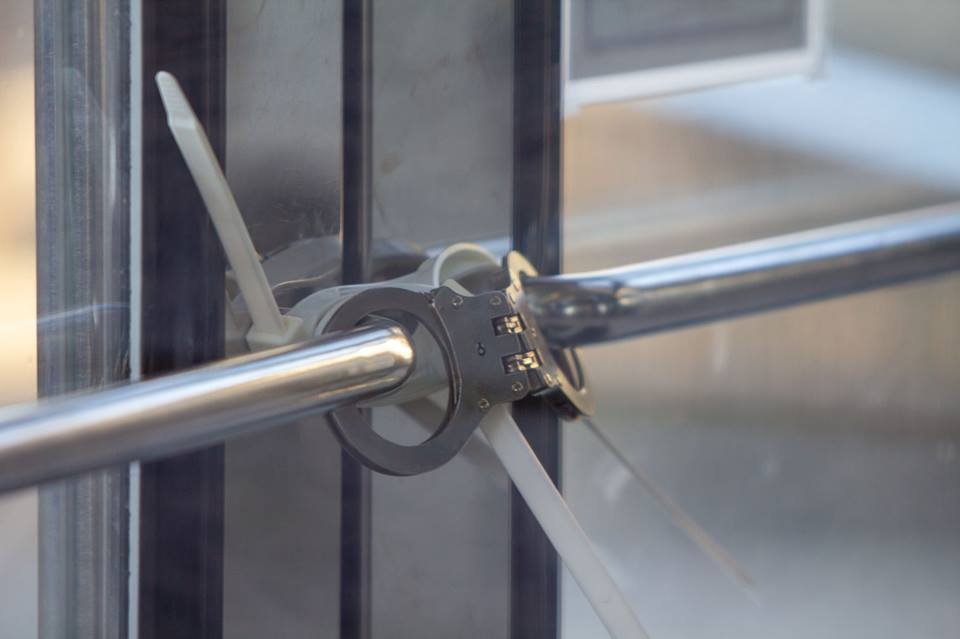 Since Dalton-Castleberry's murder the Columbus Police Department has put the Vice Squad under review. That review has lasted four weeks. The FBI has begun it's own investigation. No conclusions have been released from the Columbus Police Department's Review of itself. The FBI has claimed it was “taking over” on September 6th. Thus the investigation is still open, is now federal, and thus no information needs to be released.

According to Bobbi McCalla, Donna's sister who spoke at the rally, the FBI has told the family explicitly that they are NOT investigating and will not investigate her death. No official word has come to the family from the City or the Police Department. There has not even been a letter of statement of condolence. There is no stronger method than silence to tell someone that their lives and the lives of their family do not matter.

While the family and community members held a speak outside the police station, the doors were both handcuffed and zip-tied shut from the outside, as can be seen from the picture at the top of this article. This was done from the outside thus the police had multiple ways to leave the building. Indeed several squads of riot equipped bicycle officers were held in reserve behind the building out of sight and off camera.

Despite the presence of News Cameras from the local representatives of a compliant corporate media, the police did not give a statement about the life and death and inherent human value of Dalton-Castleberry or Bobbie Simpson whose burned body was found in a bush in upper Arlington last week on a jogging trail in a park. The upper Arlington Police are investigating that crime as “arson” since a city owned bush was damaged. They are tacking on “abuse of a corpse” but not murder. This is a way to both protect a clumsy perpetrator and send a clear message that the lives of sex workers do not matter. Simpson did not exist as a person until her body as an object became a matter of public record and a shrub is worth more than that object.

31 year-old Mohamed Abdigafar Abdullahi was arrested several days ago and charged with burning Simpson’s body “in a container.” Abdullahi was caught for OVI during a traffic stop and had been sought because his DNA was allegedly found at the scene. He had gotten traffic citations in Upper Arlington before and was known to the police there. His record shows a number of traffic violations and petty offenses in the last two years. On each arrest and citation a different address was recorded. It seems he moved every couple of months all over the Columbus Area.

How Abdullahi's DNA got there is unclear. Perhaps he touched whatever the police are calling a container before it was used as such. He fits the classic profile of a fall guy and without a murder charge he will not have the legal representation and the case will not have the scrutiny. That coverup is nearly complete even though a dead body on fire is an obvious message to living people.

The Mockingbird is following up on several leads in both cases and will continue to update the public as facts can be verified.