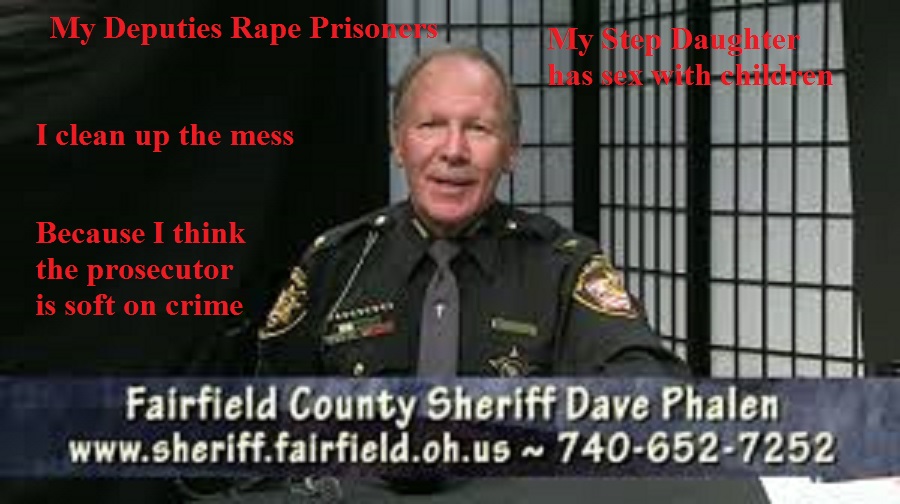 Jail is never a fun place to be. The overcrowded and ever expanding Fairfield County Jail in Lancaster Ohio is less fun than most and downright dangerous for some. Deputies smuggle drugs to female prisoners in exchange for sexual favors, traffic in photos of prisoners, and in at least one case, allegedly raped them just out of view of security cameras. When the rape was reported, evidence never made it to the prosecutor's office. Witnesses were then threatened with retaliation. When the prosecutor found out it happened, witnesses were offered no protection and threatened with incarceration in the very jail run by the very rapists they were expected to testify against.

On or about November 28, Deputy Jared Garren removed a female prisoner from solitary confinement and told her she needed to change. He took her to the changing and storage area, which is off camera, said, “I knew you were too scared to do it.” He then pulled her pants down and raped her from behind. He ejaculated on a stack of suicide blankets in the corner. Male deputies are specifically not permitted in the areas where female prisoners are sent to shower or to change. There are no cameras in those areas.

The survivor of the assault (The Mockingbird does not name survivors of sexual trauma) confided in another inmate called Susan Doe in this article to protect her from retaliation. The details of the assault matched a previous encounter Susan Doe had with the badge-wearing predator. While showering, Susan Doe asked another inmate for a razor. Audio but not video from the women's showers is available to guards. Deputy Garren opened the shower door bearing a razor and with a grin said, “I knew you were too scared to do it.” The use of the same line is what caused Susan Doe to believe the survivor and help with reporting the incidents. She gave written and oral statements to Sergeant Boring.

Additional reports were later taken by Deputy Whitticker, who forwarded them, as was procedure, to the duty sergeant. DNA evidence was also recovered from the blankets in the store room. According to unconfirmed statements from within the Fairfield County Prosecutor's Office, those reports were never received. All reports made from within the jail are available to be read by all guards, thus exposing witnesses and victims to violent retaliation.

Deputy Garren has a good work friend he hangs out with when not taking pictures of female inmates and trafficking them to male inmates. That friend is Deputy Matthew Greathouse. Greathouse is allegedly involved in smuggling drugs to prisoners in exchange for sexual favors. He and Garren also sometimes have “consensual sex” with prisoners. One prisoner claimed to Susan Doe that sex with Garren was difficult because she “could not get her legs around his gun belt.” Gun belt is presumed to mean stomach in this case.

The other prisoner that Greathouse was having sex with was eventually transferred to state prison. Greathouse attempted to clandestinely communicate with and visit her there, using other prisoners as intermediaries. When this was discovered, he began to threaten witnesses: “If I find out you opened your dick sucker, I'll drag you off camera and beat you bloody.” Male deputies in Fairfield County routinely refer to female prisoners' mouths as dick suckers as if that were the only function of a mouth. If, in their view, a woman's mouth were for eating the jail food provided by Aramark (which often contains maggots), it would likely be called a shit eater.

Greathouse, despite being transferred to the men's facility, is still permitted to enter the women's facility while off duty. He has been seen there in the early morning, standing at the foot of women's beds, staring. Deputies also tell inmates that Greathouse had been by, off duty, to make threats should the women not have been woken by his ponderous footsteps.

After her release, a relative of Susan Doe confided in Lancaster City Council Woman Becky Tenner. Tenner told County Prosecutor Gregg Marx who contacted the survivor. The survivor has given a statement. He then appeared in person with two detectives, three probation officers, and an investigator, David Kessler, at Susan Doe's Tuesday meeting with her probation officer.

They demanded she make a statement without offering her protection. Susan Doe has already engaged an attorney and was planning on meeting directly with Marx with her attorney present. She was told she had no right to counsel, in fact, no rights at all and would be sent to the same jail at once if she lied or withheld anything. Her statement of all the facts is now in Gregg Marx's hands. When Susan Doe asked for some protection from the people she was expected to be a witness against, Kessler replied that he himself might be run off the road and killed on his way home.

Susan Doe was told, under penalty of imprisonment, not to speak to anyone about the case for eight months. That period ends after the general election in which both Marx and Phalen face challengers. Thus Gregg Marx, chief prosecutor of Fairfield county, in the course of a single conversation violated the first, fourth, fifth, sixth and eight amendments to the Constitution he swore an oath before God to “uphold and defend” in order to keep feeding at the public trough.

Prior to 2014, relations between Sheriff Dave Phalen and Marx were not so tense. That was when Phalen's stepdaughter, Jessica Hatchat, received a three day sentence for having sex with two underage special needs teenagers. She was a teacher at the time. Because she was not directly the teacher of the students she victimized, she was only charged with a misdemeanor after 18 months of investigation. The case only became public when a reporter chanced upon the quiet arraignment. Continued questions caused it to not simply go away.

Hatchat's interview with a detective and the very same investigator, Kessler, was much more relaxed than the one with Susan Doe. Hatchat, questioned a month after the initial report with her lawyer present, was reassured by Kessler with the following statements: "You know that (Phalen) did not get 100 percent of all the votes. He probably got 70 (percent). So, he's a very well-liked politician, but there's still 30 percent of the people that don't agree with him being the sheriff. So there's a very good chance one of the 30 percent know who his stepdaughter is... This is the disadvantage of being the sheriff's daughter. Someone just out of vindictiveness will... drop a dime, probably to the media. It's not going to be let out by us. It's not going to be let out by Gregg Marx, your attorney, or you, but your dad's a high profile politician in this community and people oftentimes just sit back to pounce on a politician, particularly a law enforcement officer."

Since Marx bowed to the public pressure to prosecute the Sheriff's stepdaughter on the least possible charge, Phalen and other police chiefs have lined up in calling for his ouster in the next election. Ironically, their reasoning is that Marx is to eager to allow plea bargains like the one Hatchat received that ended with her three day jail sentence.

Phalen and Hatchat are not the only members of that family involved in criminal justice in Fairfiled County. Those inmates lucky enough to be released from Dave Phalen's jail-turned-rape-camp can find their way to a faith-based halfway house run by his wife, Lorretta. It's called Gracehaven and it makes a lot of money. Inmates are required to attend church services of Gracehaven's choosing, contribute money, and are not permitted outside counseling or school. Participation in twelve- step programs is also not allowed because Gracehaven's program is based on “deliverance.”

All that prayer gets answered in the form of large profits. According to their tax return for the last year, Loretta Phalen was Executive Director in 2013. Their profit after expenses was $43,866. Loretta Phalen coincidentally stepped down after her daughter's arrest as a sex offender to spend more time with her family.

The Mockingbird will continue to cover this and other stories of prisoner abuse and neglect in Ohio. We will always expose corruption and we will always protect our sources as we have protected the multiple sources for this story. We will fly high, see it all, and sing about it.