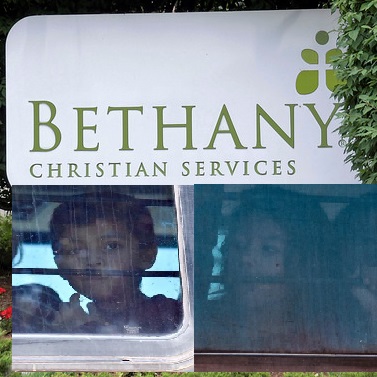 Today, June 24th, The Hill Reported that migrants separated from their children are being offered their children back upon their return to the country they are seeking asylum from if they sign a voluntary deportation order. They are not reunited with their children at the airport, and by the admission of the Federal government, many children are “lost” in the system. Earlier this week a federal judge was reported to have literally pounded his fist on the bench in anger at the practice screaming “when you go to jail and they take your wallet they give you a receipt. [but for] the children not even a slip of paper?!” The children proceed from camps, on buses that an executive order supposedly abolished, to other holding facilities where they are put into “foster” care with poorly vetted individuals, and with non-profits. One such faith based non-profit, connected to Education Secretary Betsy Devos, is prepared to never return those children.

Bethany Christian Services operates a network of foster care shelters and adoption agencies around the country. Often they will file abandonment charges against parents after six months of no contact and then take guardianship of their charges until they can find suitable right-wing fundamentalist families to adopt the children. Their fees for delivering the product, which is children, often run as high as $50,000. They get their raw materiel, which is children, from the government and are paid to process their product and maintain their inventory at taxpayer expense.

Brian Devos is their senior vice-president and is the first cousin of billionaire Dick Devos, husband of Betsy Devos and former CEO of Amway. Betsy Devos is the sister of billionaire Eric Prince, former owner of the mercenary corporation Academi, which used to be called Blackwater. 4 Blackwater employees were convicted of war crimes for opening fire on civilians in Iraq in 2007, killing 17 and wounding at least 20. Three of the convictions were later overturned.

The Devos's network of private charities has contributed at least $275,000 dollars to Bethany Christian Services in the last four years. Bethany Christian Services operates 99 beds for refuge children in at shelters in Michigan, Pennsylvania and Ohio. The children, some as young as 3 months old, arrive at their Grand Rapids processing center before being dispersed. According to a report in Michigan Alive, the average age of the children received from ICE is 8 years old. Other reports place the number of children taken into Bethany's 99 bed system in the last six weeks between 65 and 81.

That makes between $3.25 million and $4.1 million in potential profit for the Devos family religious kidnapping ring. As the parents are deported, and may not renter the country, and their children are no longer in government custody and lost, they have no legal way to assert custody or paternity and get their children back.

According to the Transactional Records Access Clearinghouse, a data gathering, research, and distribution organization at Syracuse University, Bethany Christian Services processed 182 detainee children in 2017. Continuing this trend, 600 children will be kidnapped by this group of government connected religious fundamentalist and their profits will soar by over 300 percent.

Combining war criminal profits, religious overtones, forced conversion to a fundamentalist sect, and child kidnapping turns this whole scheme into Boko Harem with the backing of the whitehouse and a funding from the taxpayers.

Locally, these American religious child traffickers maintain their headquarters in Columbus at 665 East Dublin Granville Road. It is unknown if they are hiding in the detainee children basement for religious indoctrination before forcible adoption or just operating a child sales office out of that location.