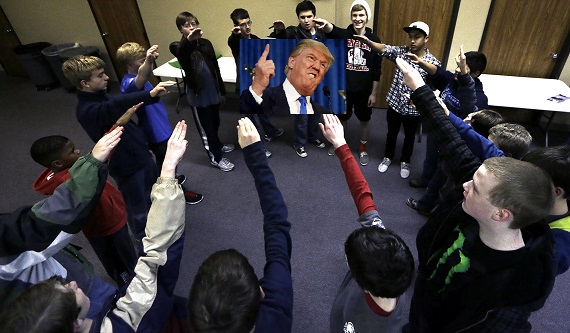 An old college friend made an observation of social media two days ago cause me to have an epiphany about Trump, and the president's twittering yesterday, July 26th, cemented the lesson. I invited my friend to produce an editorial, the one you would be reading here, to extend their important contribution to the national dialogue on America's current totalitarian drift. They declined to the offer because they feared to criticize the president or certain institutions under their own by line for fear of employment retaliation against them or their partner and social retaliation against their family. This friend is not a person ruled by fear, in fact I have seen them take courageous public stands on other issues. Such is the climate of fear in which we live.

Many writers have noticed Trump's demands for personal loyalty extended into his speech to 45,000 children at the National Jamboree. It has been called an attempt by Trump to turn the Boy Scouts into a new Trump Jugend, Liga der amerikanischen Arbeiterjugend, and it was, but not in so direct a way. Trump is no Hitler. As another friend of mine observed he is an Atlantic City Berlesconi, right down to the dancing girls and the child rape.

Trump's recent tweets, and along with his speech, are not purely dog-whistle politics either. These prouncements have Steve Bannon's stubby fingerprints all over them even if the cue cards are held in the president's tiny hands. They produced the desired effect, which was conflict around and within the Boy Scouts.

There will be pushback from inside and outside scouting against the politicalization caused by Trump's latest tossing of wilted word salad. All the den mothers I know are scientists with advanced degrees. They already dislike a man who ignores facts like climate change when they are not outdoors enough to avoid needing to spray on their tan. There will be pushback on the other side from entrenched reactionaries who are still angry that scouting has been infiltrated by lesbians and gays and agnostics and atheists and transgendered children.

This is the conflict that Bannon wanted when he pushed Trump in that direction. Simply building an organization for young right wing fanatics who enjoy camping has been done. It's called Trail Life, and traditional conservative forces would have been happy to have the president get behind it. Those children already even give the Nazi salute as shown above.

The strategy is not to capture the institution directly but to re-ignite internal struggle in a way that results in the right winning through exhaustion and attrition. The hope is that progressive parents will simply give up, or drift away as their children grow up. Recruiting of progressives will slow as parents will not want to engage with a toxic enviroment or subject their children to it.

This is how they intend to drain the swamp, and the image here is the removal of sewage. That sewage in Bannon's mind is children.

Trump's sudden order to remove transgender military personell will have a similar effect. On top of people having military careers sudden cut short, there will be opposition from personell that serve with them, as well as support from knuckle dragging reactionaries who never liked the idea in the first place. The implementation of this order, if successful, and the opposition to it will end many careers of cis-gendered non-reactionaries in uniform simply because conflict in an authoritarian system produces stronger consequences.

Further, the officer corps, which is one of the two long term backbones of the military, will be similarly disrupted on a national scale. Hundreds of students who attend college on ROTC scholarships will suddenly be out in the cold, unable to complete their education. This will impact cis-gendered students currently enrolled with them and some of them will resign or be removed.

Such a policy would then instantly run afoul of the non-discrimination policies of the college campuses that host them. Thus ROTC will soon become the focal point of campus activism, leading to strife, and the preception in society that you must support Trump-Bannon bigotry or want the Islamic terrorists to win. In the end, grades will drop, students will migrate, and the reactionaries will recapture the institutions through attrition.

It is not the content, but the targeting and timming of these pronouncements that are the real reveal of underlying strategy behind them, and the goal of that strategy is a counter offensive in the kulturkamph the right wing is loosing.