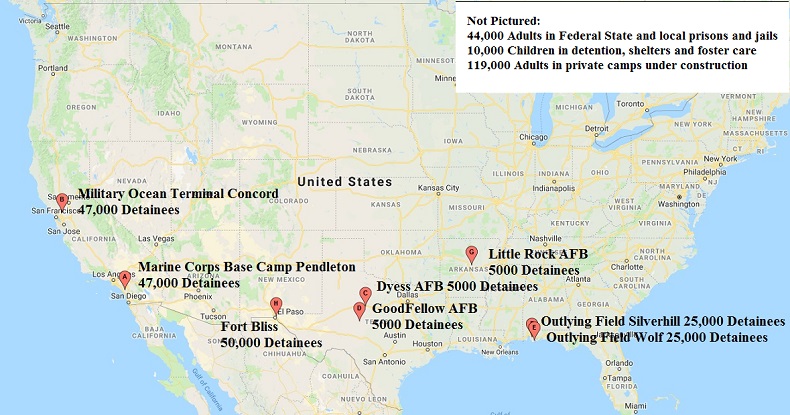 Ethnic cleansing is a clear priority for America right now. The publicity surrounding the separation of families, the lies about the practice, the trafficking of children to connected faith based kidnappers and plans to strip citizenship from those already here has garnered headlines. A pair of moves by the Trump administration in that cloud of crimes against humanity indicate a clear ramping up of what can only be called America's concentration camp system. The executive order signed on June 21st had a provision for $1 billion to be given to private contractors to build tent cities for 119,000 people. Two days ago, on June 23rd, Secretary of Defense General Mattis announced that the military would also house prisoners on military bases. Plans were already apparently in the works before the announcement.

After a survey of local news stories to run down the locations, the military is building the capacity to imprison an additional 209,000 people. This will include 94,000 at two bases in California, 60,000 at three bases in Texas, 50,000 in at two unused naval airfields in Alabama, and at least 5,000 at Little Rock Air Force Base in Arkansas. One of the Texas bases, Fort Bliss, is served by a freight rail line and will hold 50,000. This means actual freight trains bringing people to actual camps.

Not included in this military total nor in the civilian contractor total are the estimated 10,000 children held by private non-profits like Betsy Devos' pet project Bethany Christian Services or the multi-facility monster Key Southwest Programs of Texas. Also not included is the official capacity of ICE federal, state and local jails of 44,000.

These latest moves will increase the number of human beings being held by the federal government on immigration violations by 607%. A total of 382,000 people will be in camps, prisons, jails, shelters and kidnapped for adoption. This represents a 46% increase in the total federal prison population and an increase 15.4% of the total prison population of the United States binging that to over 2.5 million people.

This total number of new prisoners will be 328,000. That is nearly three times as many men women and children that were placed in internment camps during World War II.

The plans were already in place by the time they were announced, which means they were either already being prepared for some time, as good military staff work takes more than a few hours. Likely they are dusted off and updated versions of war plans for suppressing unrest in the United States. The Navy's chief press spokesman, Captain Greg Hicks, when questioned by Time magazine, virtually confirmed the plans had come right off the shelf “It would be inappropriate to discuss internal deliberative planning documents”

They are very similar to a series of plans first commissioned by the Nixon administration under the code name CABLE SPLICER. These were updated in the 1980s by former national security staffer and current NRA President Oliver North under the supervision of his immediate superior then Brigadier General Colin Powell under the code name GARDEN PLOT. The later plan called for the handing over of military grade equipment to private militias in case of unrest around United States policy in the very same parts of Central America that people are fleeing today. The private contractors mirror the private militia and paramilitary groups Lt. Colonel North hoped to employ to suppress immigrants and leftists.

With Oliver North now at the head of the NRA and a reported 1/3 Ice employees less than honorably discharged from the military one only has to add private non-profits like Betsy Devos' favorite and military mega-corporations like General Dynamics to see both historical continuity and parallels.

General “Mad Dog” Mattis has said this about the military's role thus far "We are in a logistics support response mode." That means we have the transport and guarding capabilities and we are build the camps as fast as we can.

History can be obviously mined like panning for gold to draw the necessary references when the military, public-private partnership institutions, and military corporations tied directly to cabinet members are directly involved. When freight trains are added in the picture is pretty much complete and the words concentration camp system can be said without hyperbole or sadly even irony. 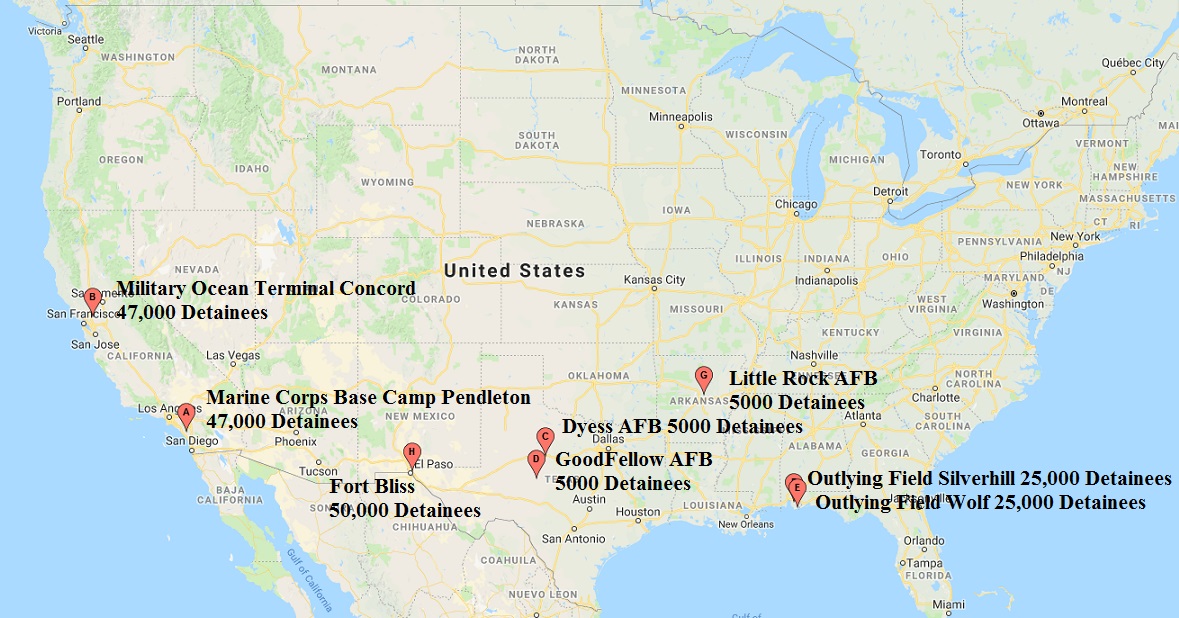