Brexit was a choice between a bullet and a rope. 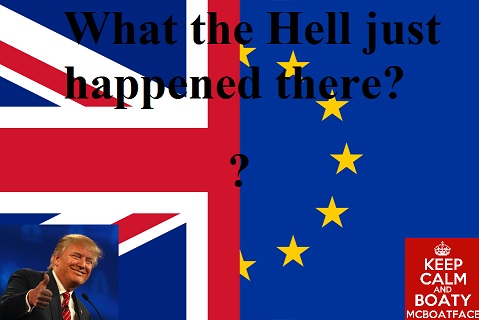 The State of Utah used to grant a person condemned death a final choice. The choice between hanging and firing squad. Washington State permitted the rope or the electric chair. Washington replaced the chair with the needle and Utah swapped the rope for the same. Ohio eliminated the chair and the choice after Johnny Byrd took the more graphic option in 2001. The choice is mostly meaningless as dead is dead. There is no way to die that tickles. The recent Brexit vote in the UK is a similar choice. It was one between a lethal set of austerity polices dictated in London or Brussels and a central bank run from London or Berlin. No matter how one votes, people will suffer and die.

By a paper thin majority the UK electorate opted to be beat to death in corner by their traditional patriarchs. They opted for structural neo-liberal violence in a more familiar and familial setting. The conservative wing of the British establishment, lead by a man who publicly fucked a dead in the mouth, first offered the choice, then repudiated it without acting against it. Had David Cameron simply repudiated the thin popular will of the people, he would not have done so without a recent precedent, where a choice that the UK was united around in greater numbers was simply ignored.

The key issues framing the Brexit vote were austerity and race. Sectors of the establishment wanted greater benefit from austerity and did not want to share that benefit with the German er European central bank. London's banking system is awash in drug cartel money from America, and the necrobeastiality obsessed establishment politicians routinely use the same neoliberal structures to put their inherited wealth beyond the reach of taxes they both impose and complain about.

Since the Brexit vote, people have already tweeted that their rents have gone up. This is in a country where renters pay taxes on closets because they are “bedrooms.” That tax was written in London not Brussels. Politicians have promised to spend money going the EU on health care. This is a health care system they have already gutted. They are not going to ungut it or pay doctors more than $13 an hour. They are also not going to do away with zero hour contracts or ruling that the deathly ill are somehow “fit for work.”

Brexit will not change the dynamics of London's housing crisis. It will not alleviate the UK's recent wave of homelessness and pensioner suicide. It is only a formal switch between the levels active listening in the direction of Berlin, Paris and Washington.

The other factor is race. Specifically Islamophobia. This is a home grown product in the UK but significant market penetration has been achieved by American products in this sector. The right-wing terrorist who murdered an MP who was campaigning for the UK to remain in the EU bought his propaganda here in America. He was a long term member of the National Alliance which was based closer to me than London is to York. The National Alliance was an openly Hitler loving neo-nazi group. This man's hate was not a whipped up fear of non-existent terrorist attacks by drowning Syrian children. He was just a bigot bent on murder and he learned his trade here not there.

The Tories pandered racism to shore themselves themselves up against attacks from the right. Because the left could not deliver, and moved to the right, the Tories moved further right, and now all parties are faced with the payment for the sins of right opportunism. Cameron never really wanted to leave Europe, but yet here there was Nigel Farrange to representing him to Europe. What exactly he expected as a result of such a situation is not comprehensible to those of us who understand that bacon is food not a sex toy. Cameron is on the way out for politically overplaying his hand but he was not for over fucking his breakfast.

Race as a factor is easy to demonize the working class UK voter on. Trump finding a second country to speak and therefore embarrass himself in was helpful in that respect. Race might have been the slim margin by which “leave” won the vote, but the majority of a country did not goosestep to the polls because they suddenly fell in love with an Austrian Corporal or an American Rapist.

Many of voters left because they are tired of increasing misery and a two party system that refuses to change the underlying parameters. Many of those voters would choose to leave the UK as Scotland seems ready to have a referendum on independence and Northern Ireland is looking South and East as well.

They were duped into voting for something that will likely increase that misery. Neither choice would have eliminated the economic misery of an unsustainable neoliberal system nor will either choice eliminate the parameters that make this system seem like the end of history. Trusting Corbyn, the Pig Fucker, Hillary or Trump will not change these parameters either. Should the working class of the UK choose to leave the EU they should return Westminster and Canary Wharf as a parting gifts.